You are at:Home»News»Entertainment»Paris Jackson tweets photo of shrine to father Michael Jackson
Tweet 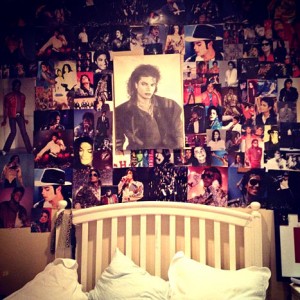 Covering bedroom walls with photos and magazine spreads of one’s favorite celebrities and fashion icons is common for many teenagers, but Paris Jackson’s walls only have room for one star—her father, Michael Jackson. On Monday, the 14-year-old tweeted a photo of the wall above her bed, which she covered in a collage of photos of Jackson.

Songs like “Beat It,” “Billie Jean” and “Thriller” combined with Jackson’s edgy look guaranteed him wall space for thousands of teenagers during the 1980s. But Paris’ bedroom collage is particularly special to her because of Jackson’s death in 2009.

“A whole wall of his pics is the LEAST I could do,” Jackson tweeted along with the picture.