You are at:Home»Features»Limelight»LIMELIGHT – Richard Wilson: Bringing Jackie Robinson and African American art out of the shadows
Tweet 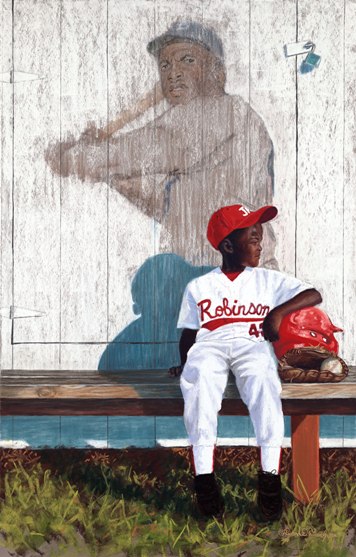 On April 12th, the movie biopic “42” chronicling the life of baseball great Jackie Robinson will hit the theaters.  Artist Richard Wilson sat down with the DC Spotlight Newspaper to talk about the movie and one of his most recognizable paintings, “In His Shadow (Jackie Robinson)”, which depicts the memory of Jackie Robinson in art form.  He also talks candidly about his hopes of painting the official portraits of President Barack Obama and the First Lady during what will be the president’s final term in office and how his father inspired his aspirations and art.

Wilson is a visual artist who projects the beauty of the world around him. At the age of 8, the Robersonville, North Carolina native began crafting renditions of cartoon characters, action figures and cars. He soon became immersed in the art culture and with the help of his father, continued to pursue a career as an artist. Wilson attended Barton College and graduated with a degree in communications art. Afterwards, he went on to obtain a degree from Pitt Community College in advertising and graphic design.

Wilson is the recipient of numerous local, national, and international awards. He received the National Arts Club Award in 2002 and is currently one award away from gaining official recognition from the Pastel Society of America. In 2005, Wilson became the first African American to have a painting displayed in any North Carolina courthouse.  His work can be viewed in multiple books, museums and other collections. 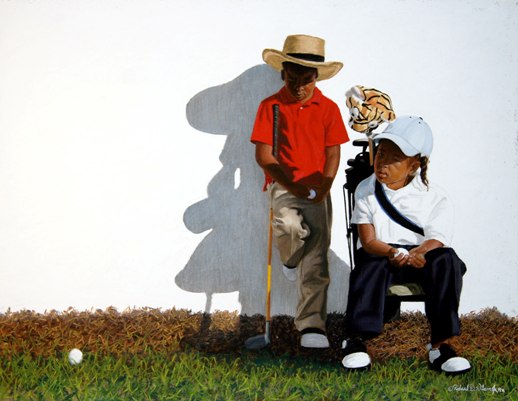 Vaughn: So, tell me about a person or an artist who helped inspire your way of painting.

Richard Wilson: Well, it was my dad. My dad was an art major, but then switched to a major in mathematics. He used to always draw my brothers and me when we were younger, and he used to do a lot of painting on the side. I was always influenced by him.

V: So he was the one who taught you what you know today?

V: Was there any other factor, besides your father, that made you want to pursue a career as an artist?

RW: Well, I was always inspired by Norman Rockwell. He was one of the more widely known or more famous artists that I knew of growing up…He did a lot of bold painting and he did some drawings, but it was his Americana themes and themes about family that really caught my eye. 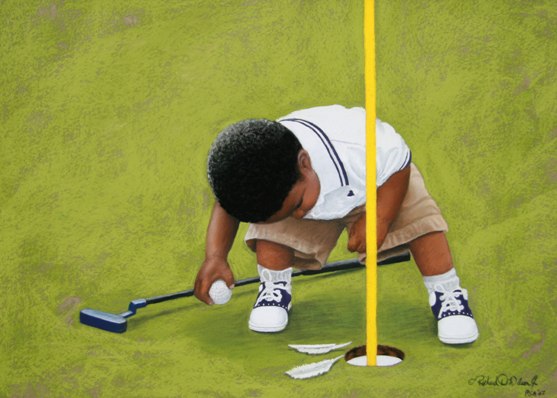 V: Going back to your father, how did his influence affect your mentality about your work?

RW: His use of realism and how realistic he drew really affected me. It inspired me to go in that direction and do more realistic paintings and drawings. I started out using colored pencils, pen and ink, and graphite because that is what he used. Later on, I started working with pastels, which is raw pigment and they were a lot more vibrant. I could use pastels faster and could create something a lot faster. Pastels are a lot more vibrant or rich than the colored pencils and graphite, so I’ve been working with that since 1997. I’ve actually launched several international art competitions with pastels.

V: So, what prompted your switch from graphite to pastels?

RW: Well, I was getting ready for an African festival and I wanted to paint these African women who were wearing head wraps. A friend of mine, who was cleaning out his store, had some pastels, and he asked me if I want to purchase them because he knew I was an artist. I agreed to try them and I used them for the painting of the African women. It was incredible, I mean, it took me half the time to paint versus doing it with colored pencils. The colors were just a lot more vibrant, and I had such a great response at that event. Ever since then, I haven’t done anything else; it has been strictly pastels that I’ve been working with. 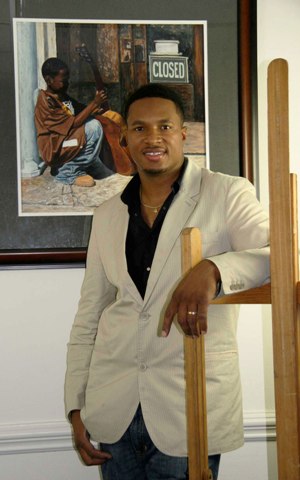 V: I’m shifting gears a little bit, but this new movie, “42” is about the life of Jackie Robinson. It is coming out on April 12th, and you have a painting, “In His Shadow” of Jackie Robinson and a little boy wearing the number 42 jersey. What inspired you to create that painting?

RW: Well, I always try to do paintings that reflect the people who have come before us. I always look back to our ancestors and to those who have made a difference. I call them trailblazers. I just know that Jackie Robinson was a trailblazer, because he broke the color barrier. That was actually my third piece in the “In My Shadow” series. The first piece was of Lee Elder, the first African American golfer to play in the masters. A lot of young people don’t know about him, so I painted a little boy walking in front of the side of a wall with Lee Elder on it. The boy has his golf clubs on his back and he has a golf club cover of a tiger. The tiger cover represents Tiger Woods as well as the boy’s inspiration to be the next master. The next one was “In Her Shadow”, with Althea Gibson in the background. Then I did the Arthur Ashe piece, and the Tennis Hall of Fame actually purchased that piece for their permanent collection in Newport, RI. It was afterwards that I did the Jackie Robinson piece and the latest one was a Michael Jordan piece.

In my paintings, I add little subtle things that say a lot. For instance, in the Jackie Robinson piece, there’s a door behind the little boy and it is unlocked. It represents the fact that Jackie Robinson broke the color barrier. He unlocked the door for so many, not just for baseball players, but also for athletes in all sports. I just want to paint pieces that really represent the people who came before us and that have made a difference. Sometimes we forget about those people, and I don’t want to do that. Another example is a piece I did to commemorate President Obama’s inauguration. I knew a lot of artists were going to do paintings of the president, but I wanted to do something that represented those who came before him. I did a piece called “44”, and it’s of an older gentleman sitting on his step in front of his house. He is holding an inauguration ticket in his hand and he’s thanking God for allowing him to see the hard work paid off through Obama’s inauguration. Behind him there is a flag on his door and above his door is his house number, which is 44. That gentleman is actually a real person. He is a veteran and he lived through the Civil Rights Movement.

V: These subtle reminders that are put in your paintings, is that something you try to do with all of your work or was this 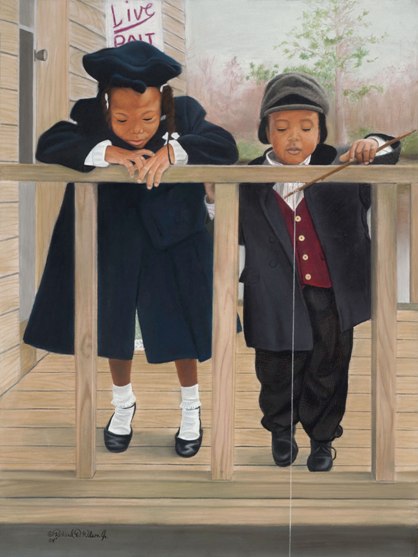 mainly for the “In his Shadow” series and for the Obama painting?

RW: Yeah, I put a lot of thought into all of my pieces, they are not just pretty paintings. I always try to put messages in them that say something. My pieces tell a story, and that’s what I try to do as well as create nice compositions. I also add light to my pictures to give off a sense of life and to make them more dramatic rather than just having a flat painting. I put a lot of thought into every piece, and I try to put symbols in there to make you think.

V: And I hear that Robinson’s daughter contacted you about the painting. What did she say?

RW: She said she loved the piece that I did of her father and she was honored that I would honor her father in that way. She also writes books, so she said she would pass along my name to a publisher at Scholastic. Hopefully, I will be able to work with her one day and illustrate one of her books. It was an honor just to receive an email from her.

V: So for the “In His Shadow” series, I know you said you want to create work that provides reminders of the people who have come before us. Was there anything else that prompted your creation of the series?

RW: Well, I’m a sports fanatic and I grew up playing sports all of my life. However, I’m not just going to paint sports with the “In His Shadow” series. I want to paint people who inspire me and who have made a difference. I really want to spread that knowledge about these people, these trailblazers. Sometimes, we aren’t provided with a lot of black history in the schools; we don’t get taught a lot of that. I’ve been asked many times to come talk at different schools, so I feel like that is a void I can help fill in my own way.

RW: Yep, I come to the schools, and I talk about my career. I talk about how I got started, and I try to encourage the children to not give up on their dreams. I remember when I was in the 7th grade, I painted several black historians for my math teacher. She asked if I could paint African American trailblazers, so I painted Booker T. Washington, Frederick Douglass, Martin Luther King, Jr., etc. What I didn’t know was that they were going to put up a bulletin board with all of my drawings on it. At the very top it read, “Future artist, Richard Wilson”, and they put it right in front of the principal’s office. To this day, the teacher that asked me to do that still has those drawings. And she said she knew I was going to be an artist one day, which is why she held onto them. It was an honor to have someone believe in me when I was younger.

V: Can we talk about your interest in painting the official portraits of the president and First Lady for the National Portrait Gallery? How are you visualizing your representation of them if you’re able to paint them?

RW: I would love to be able to bring out their personality and bring out who they really are in a relaxed setting. I would really love to paint the Obama girls, because I have three daughters myself. All of the girls in my paintings are my daughters, so I can relate to the president’s love for his girls. I would love to be able to paint them in a natural setting, just relaxed. It would be an honor to do a portrait of them.

V: What do you see in your future in terms of your career?

RW: I can see that I’m going to be a lot more known than I am now, because I’m never going to give up what I’m doing. I see myself inspiring others, especially young artists, to follow their dreams. I see myself being in museums and continuing to tell history through my art. I want to be able to share my art and possibly have my own gallery one day, maybe in several different states.