You are at:Home»Featured»LIMELIGHT – How a basketball and the Globetrotters saved “Bull” Bullard from Detroit’s streets
Tweet 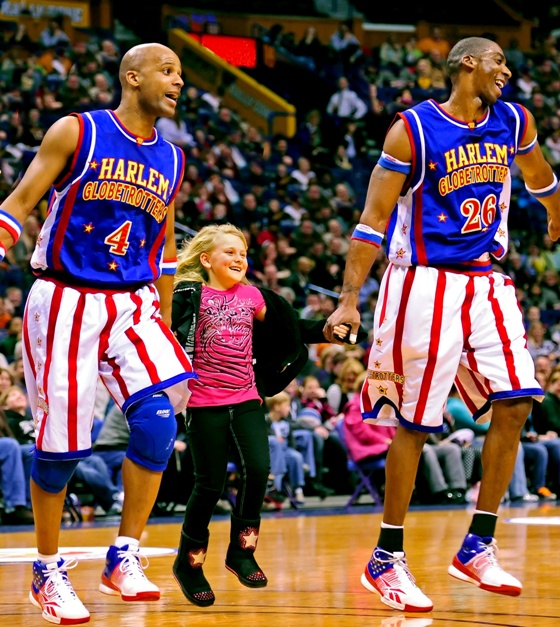 When Will “Bull” Bullard sat down to discuss his life of travel and training as a guard for the dynamic and hilariously funny Harlem Globetrotters, he made it clear that growing up in Detroit was extremely difficult and at times tough to endure.  He said, however, that his secret to success was knowing the difference between positive and negative. With many thousands of fans who come out and enjoy the side-splitting jokes and fun at the shows, he is grateful for such an opportunity to entertain and wants to be the best at what he does.  As a 217 lb, 6’4” basketball extraordinaire today, Bullard said that as a kid, it was basketball that saved his life.  As an adult, it is those basketball skills learned as a boy that are reaping huge dividends for this most versatile player on an exceptionally talented Globetrotters roster.

EM: Can you tell me a little bit about where you grew up? 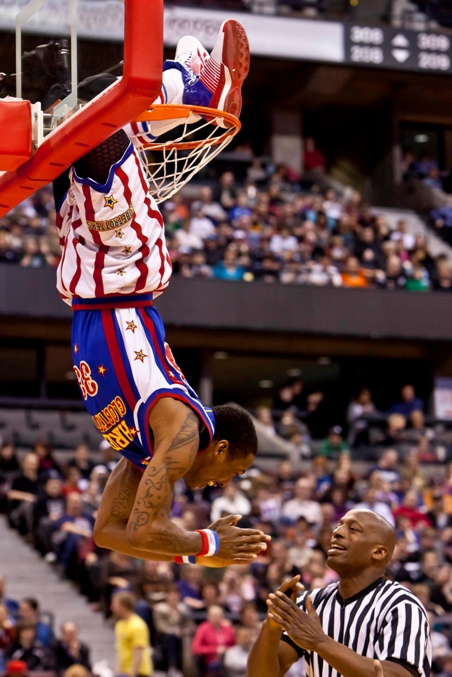 Bull Bullard: I grew up in Detroit, Michigan, born and raised. Tough background, I was in foster care when I was 12 years old, and I got out when I was 15. When I was in foster care I started to play basketball. My foster mom wanted me to do something besides sit around the house and mope, so what I did was I started playing basketball, and I fell in love with the game. That was it, man.

EM: Looking back at your childhood, do you think that growing up the way you did helped shape who you are today?

Bull Bullard: I turned a negative into a positive. People in negative situations think that it’s always negative and want to stay negative, but you have to think to yourself that you’ve got nowhere to go but up, and that’s what I was thinking as a kid. My grandmother and my sister raised me, pretty much, so I was always on a positive track.  I was always in good hands. I stayed positive as a kid and didn’t give into the negative things around me.

Bull Bullard: I know I was always active, and basketball was my way to release. I would get out there, and I 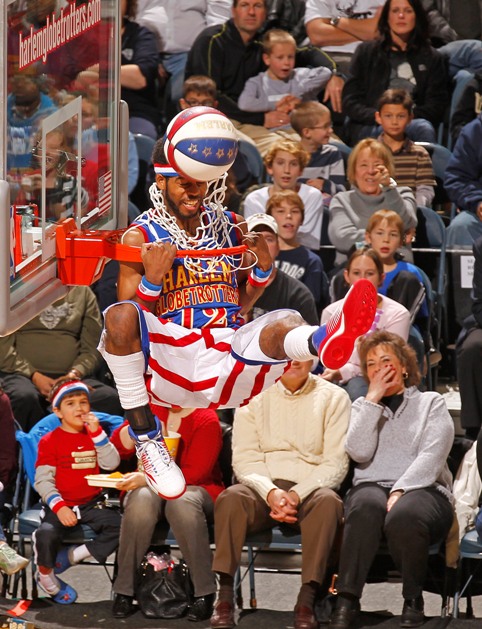 would try new moves, but if I had to focus on one sole purpose, or one sole thing, it was basketball at the time. When I decided I was playing basketball, I decided that was my thing, and I focused on that. The situation at hand, like out here at a Harlem Globetrotters’ game, I just hit the court and worry about the fans that are out here around me. I concentrate on making all of them happy and making sure that they’re good for that day. I love it; it’s my way to release. I get to go out there and just be myself. Basketball has created a way for a lot of things for me such as my career as a Harlem Globetrotter, in 2008. I was in the NCAA men’s slam-dunk contest where I came in second behind Sonny Weems, and after that the New York Jets called me down for to tryout football, yup, football. They called me down for a tryout, and then after that the Harlem Globetrotters called, and that’s pretty much it. I’ve been here for 6 years now.  I’ve been to 51 different countries around the world, and I love it.

EM: How do you like being a Globetrotter as opposed to being on any other team? What makes being a Harlem Globetrotter special to you?

Bull Bullard: Being a Harlem Globetrotter is that much more special, because we are a lot more interactive with our fans than a lot of organizations, and you haven’t heard one bad report about a Harlem Globetrotter. We are humbled with the situation in which we are [in]. We all love what we do genuinely, and we love the reasons for being a Harlem Globetrotter as far as being role-models and people with good characteristics. As far as being trendsetters and innovators, we love it, and we’re always bringing something new to the table, it’s something great to be a part of. I’m a professional athlete. As a kid I wanted to be a professional athlete, and that’s what I am today.

EM: I’ve read that you enjoy mentoring young people. What are some ways that you do that?

Bull Bullard: I don’t have one set way when I talk to a kid; it all depends on the situation that they’re in. I can come at it from a different approach being from Detroit and being from all my situations, I know that I’ve been through a lot. I know that other people are going through a lot, and [I] can help out or direct them to a positive person that could help them. I love being a role-model for kids, and I love that aspect of it.

EM: In your profession, you travel a lot. How does that work with your family?

Bull Bullard: It works.  My family is very understanding. They know I’ll be gone 6 or 7 months out of the year, but they also know that I’ll be changing lives. They don’t look at is as “Oh you’ll be gone; oh we miss you.” They understand that you never know who is coming to the games. Maybe someone’s family member just passed away and their way to cheer themselves up is to come to a Harlem Globetrotters’ game.  Then it’s up to me to go and do my job and do my part. My family understands when I’m out there and I’m gone, so that’s a good thing.

EM: When you’re done, and you’re ready to hang up your jersey and call it quits, how would you like to be remembered by those who have enjoyed watching you play?

Bull Bullard: I think that the fans will always stick around just because of the genuine person that I am and just because what the organization brings to the table. If my fans do still want to stick around as far as being a part of the Harlem Globetrotters organization and being supportive, that’s always excellent. That’s always great. But when I leave, and I hang up my jersey, I want to be remembered as one of the best Harlem Globetrotters to ever do it. I’ve been doing this for six years now, and I don’t see myself leaving the organization anytime soon. With that being said, I’m always good about trying to make contact with people out on the road. I’m actually starting a website and we want to get that going soon so that I can have the fans better interact with me, and so that they can find a way to be more involved with Bull Bullard.

From very humble beginnings in Detroit, Michigan, to the limelight of the Harlem Globetrotters, Bullard has shown fans and colleagues that adversity is surmountable, and that a positive attitude can be the difference in any person’s life.

Fans can catch Bull’s high-flying basketball skills in Washington, D.C. this weekend as the Harlem Globetrotters play at the Verizon Center.

Show dates and times are: