You are at:Home»Sports»SPORTS LEADER BOARD – RGIII: Getting to Know the Real Robert Griffin III
Tweet 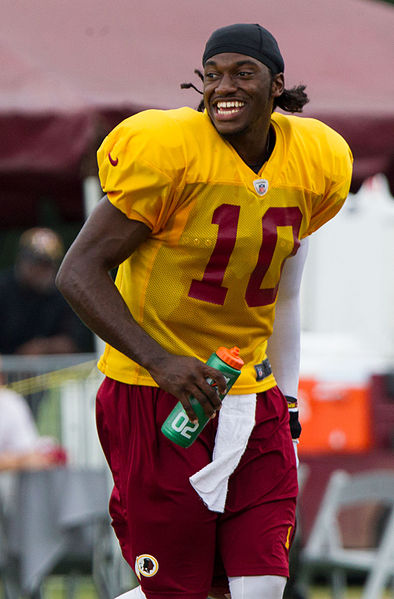 Who is RGIII? Is he the first starting quarterback in the NFL born in the 1990s? Is he an intelligent young college graduate? A Christian? A Heisman Trophy winning athlete? A humble and respectful son of military parents? The answer to Redskins fans’ dreams? Try all of the above. But what about black?

In a Decemeber 13 interview with First Take on ESPN, Rob Parker, a black commentator, made headlines for questioning Robert Griffin III’s ‘blackness’: “I’ve talked to some people in Washington, D.C.,” said Parker. “Some people in [Griffin’s] press conferences…Some people I’ve known for a long time. My question — which is just a straight, honest question — is…is he a brother, or is he a cornball brother? He’s not really…he’s black, but he’s not really down with the cause. He’s not one of us. He’s kind of black, but he’s not really like the guy you’d want to hang out with. I just want to find out about him. I don’t know, because I keep hearing these things. He has a white fiancee.  People talking about that he’s a Republican; there’s no information at all. I’m just trying to dig deeper into why he has an issue. Tiger Woods was like, ‘I have black skin, but don’t call me black.’ People wondered about Tiger Woods early on.”

Parker’s comments came in response to a statement by Griffin that although he identifies as “an African-American in America,” he does not think he should be “defined by that.” Backlash over Parker’s comments was largely negative, as fans rushed to Twitter to defend the star rookie quarterback and to contend that his private life should not be an issue. Griffin’s father, Robert Griffin Jr., had this to say: “That guy needs to define that. I wouldn’t say it’s racism. I would just say some people put things out there about people so they can stir things up. Robert [Griffin III] is in really good shape on who he is, where he needs to get to in order to seek the goals he has in life, so I don’t take offense.” Griffin III stayed out of the argument, choosing only to thank his fans for their support. His fiancée, Rebecca Liddicoat, is a native of Boulder, Colorado, whom he met while in school at Baylor University. She also prefers to rise above racially charged stereotyping. Griffin’s mother was quoted once saying that “she doesn’t see him as African American; she sees him as a man,” and that “he doesn’t see her as a Caucasian woman; he sees her as a woman,” further proving that the young couple and the people close to them will not be sucked into such negative discourse.

Parker, who was fired from ESPN, has since issued an apology, saying that although the issue of race in sports has the potential for an important yet difficult discussion, his insensitive comments “turned a productive conversation into a negative one.” He also highlighted Griffin’s immense talent, saying he was sorry for detracting from the “dignity, respect and pride” with which the quarterback carries himself. 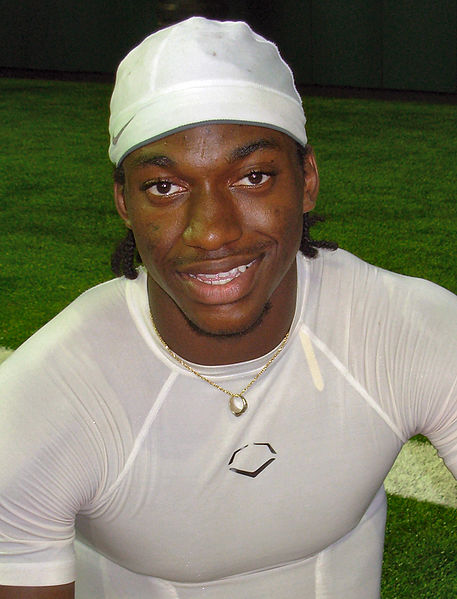 Robert Griffin III, known affectionately to his fans as RGIII, led the Washington Redskins to a well-received and successful season in 2012. He demonstrated comfort under pressure and showed the world that he remains true to his character. Raised in a military family, the twenty-two-year-old star was born in Okinawa, where both his parents were stationed. After moving around several times, the family settled in Texas, where Griffin III excelled as a three-sport athlete at Copperas Cove High School. RGIII is also a Protestant Christian whose strong religious background and strict upbringing have shaped who he is both on and off the field. He has said that his “relationship with God was [his]most important influence,” and often makes the sign of the cross after important plays. Maintaining the level of poise for which he is known, Griffin III contends that God “gives you the stage to make a difference and not to just talk about yourself … my biggest thing is it’s not our job to judge; it’s just our job to go out, praise Him.”

After high school Griffin III was accepted to several top-notch football schools, and finally chose to attend Baylor University, a private Christian school in Texas. There he stood out both as a star athlete and dedicated student, graduating in three years with a 3.67 GPA, a degree in political science, a winning season, and fifty-four school football records. He won the Heisman Trophy in 2011 and was drafted by the Washington Redskins as the second pick of the first round of the 2012 NFL draft. He quickly signed a four-year, twenty-one million dollar contract, and already has many official endorsements with Adidas, Castrol Motor Oil, EA Sports, EvoShield, Gatorade, Nissan, and Subway.

Coming to Washington among the fervor of his prior achievements and the excitement of anxious and notoriously pumped-up Redskins fans, one would not be particularly surprised to learn that fame had gotten to a young star’s head. On the contrary, however, Griffin III has proved himself to be calm, humble, and above the fray. Many look to Griffin’s parents as the source of his much talked-about humility and determination, but some of that responsibility should be credited to the young man himself. The answer to the question, “Who is RGIII?” is not simple—he is not an archetype or a stereotype, but rather an interesting and talented athlete, a dedicated student, a respectful son, a faithful boyfriend, and a good man.