You are at:Home»Opinions»Obituary - In Remembrance»OBITUARY IN REMEMBRANCE – Robin Williams: Gave happiness to the world as it evaded him
Tweet 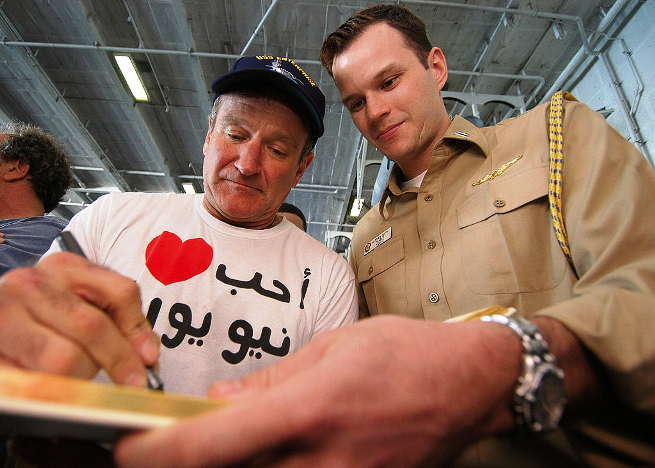 The world said their goodbyes to one of the greatest comedic actors of this generation on Monday after Robin Williams was found dead in his California home. The man famous for making others laugh tragically took his own life after a lifelong battle with depression. In addition to the depression, Williams also struggled with an addiction to drugs and alcohol. Williams was addicted to cocaine, but said he quit after the overdose death of his friend John Belushi. Williams entered rehab in 2006 when he returned to drinking after 20-years of sobriety. In July, he pursued ongoing 12-step treatment at a Minnesota facility.

In 2010, Williams talked about how dangerous depression could be when combined with alcohol. Williams admitted he had once considered suicide while alone in a hotel room with a bottle of Jack Daniels. On that occasion, Williams explained how his “conscious brain” told his drunk brain to “put the suicide over here in the discussion area” until he was sober, reminding him that “you have a pretty good life right now as it is just now.” Williams will forever rest close to home, as his ashes were scattered in the San Francisco Bay on August 12, just a day after his passing. The Williams family believed the spreading Robin’s ashes in the Bay was a “fitting” tribute to him.

Williams began his career as a stand-up comic after taking actor John Houseman’s advice. Despite his enormous fame on both the small and big screen, he still continued to perform stand-up throughout his life. It was in 1978 when Williams began to gain worldwide recognition for his part as Mork in “Mork and Mindy” a spin-off from “Happy Days”. In 1987, he proved his wide range of talent by playing an unconventional war-time DJ in “Good Morning, Vietnam”. The comedic genius became best known for his role in “Mrs. Doubtfire,” where he took on the role of a nanny to his own three children, so he could secretly visit his family at the home of his divorced wife. Much of the film’s appeal comes from unwritten, ad libbed remarks from Williams, himself. “He’ll start improvisations, but always based on character. They don’t get too wild until around Take 14 or 15. I then go back to the editing room and interlay them throughout the original scripted sequence. And they cut like butter,” said the film’s director Chris Columbus.

Williams went on to do a number of films and television shows that only proved how remarkably funny, witty and talented he was. During his career, he won an Oscar for Best Supporting Actor for “Good Will Hunting” in 1997, two Emmy Awards, four Golden Globes, two Screen Actors Guild Awards and five Grammy Awards. He was nominated for an Academy Award for playing an English teacher in “Dead Poets Society” and for playing a homeless man in “The Fisher King”.

Boston fans remembered Williams by gathering at the bench featured in his film “Good Will Hunting. “A petition has been created to place a bronze statue of Williams seated at the iconic bench.

Celebrities took to social media, upon discovering the beloved actor’s death, to mourn.

“Heartbroken…Robin had a ton of love in him. He personally did so much for so many people. He made Matt [Damon] and my dreams come 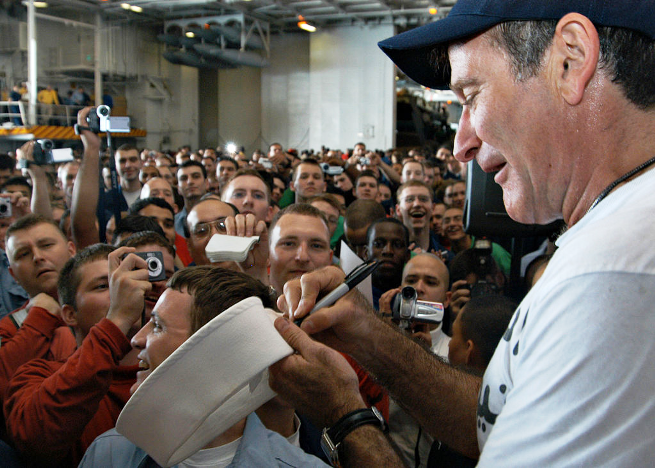 true. What do you owe a guy who does that? Everything. May you find peace my friend,” Ben Affleck posted to Facebook.

“I could not be more stunned by the loss of Robin Williams, mensch, great talent, acting partner, genuine soul,” Steve Martin stated.

The President released a statement only hours after the comedian’s death, “ Robin Williams was an airman, a doctor, a genie, a nanny, a president, a professor, a bangarang Peter Pan, and everything in between. But he was one of a kind. “

Williams’ daughter Zelda responded to her father’s last tweet that expresses his love toward her. “I love you. I miss you. I will try to keep looking up.” Zelda has since taken a social media break to deal with the passing of her father.

Robin Williams’ legacy will live on through his work and will continue to put a smile of the faces of generations to come.