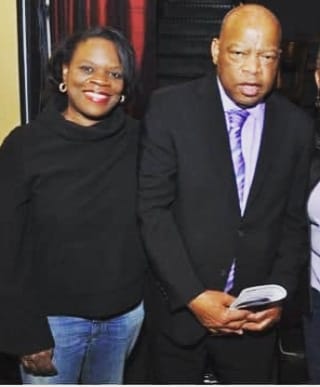 In December 2019, John Lewis, the iconic civil rights leader and congressman from Georgia’s 5th congressional district, announced in a statement his diagnosis with stage 4 pancreatic cancer. He said, “I have been in some kind of fight — for freedom, equality, basic human rights — for nearly my entire life. I have never faced a fight quite like the one I have now.” After a six-month battle with the disease, Lewis died on July 17, 2020 at age 80.

In a statement released by his family, his passing was announced.  The statement read:  “He was honored and respected as the conscience of the U.S. Congress and an icon of American history, but we knew him as a loving father and brother. He was a stalwart champion in the on-going struggle to demand respect for the dignity and worth of every human being. He dedicated his entire life to non-violent activism and was an outspoken advocate in the struggle for equal justice in America. He will be deeply missed.”

Born to sharecroppers in 1940, an Alabama native, Lewis came of age in an America that was drastically changing, and he made sure to be a part of it. Inspired by events such as the Montgomery Bus Boycott and the preaching of Dr. Martin Luther King, Jr., Lewis found his voice as a student at Fisk University organizing sit-in demonstrations at lunch counters around Nashville. He went on to participate in freedom rides, and more than once was physically beaten by those in opposition to racial equality. By 1963, Lewis was one of the key leaders in the Civil Rights Movement and helped organize and spoke at the infamous March on Washington in the summer of 1963.  During that event, he famously said, “I appeal to all of you to get into this great revolution that is sweeping this nation.  Get in and stay in the streets of every city, every village and hamlet of this nation until true freedom comes, until the revolution of 1776 is complete.”

Most recognized, Lewis led more than 600 peaceful protesters across the Edmund Pettus Bridge in Selma, Alabama in a march for voting rights on March 7, 1965. Lewis, in his iconic khaki trench coat, and the peaceful protesters were met with extremely violent opposition from state troopers who drove the crowd back across the bridge with gas and beat them with batons. The heavily televised and documented encounter was a turning point in the Civil Rights Movement and applied pressure for the passing of the Voting Rights Act of 1965, which passed later that year.

Through his position on the Atlanta City Council in the early 1980s, Lewis made his first political stand for ethics in government, a personal policy that became a hallmark of his career as a politician. In 1986, he was elected to Congress to serve Georgia’s 5th Congressional District, a position that he held until his death.

Throughout his career, Lewis has been awarded more than 50 honorary degrees from colleges and universities, such as Harvard, Brown and Duke. He received countless awards, including the Medal of Freedom by President Barack Obama in 2011.

As one of the original civil rights protesters against injustice, his death comes at another historic time of racial tension in the United States, as the country continues to reckon with the deaths of George Floyd, Ahmaud Arbery and Breonna Taylor and the international protests which ensued.  Many of the current protests have also been met with government force.

Many protesters have taken his death as a further call to action referencing a Lewis quote from 2018: “Do not get lost in a sea of despair. Be hopeful, be optimistic. Our struggle is not the struggle of a day, a week, a month, or a year. It is the struggle of a lifetime. Never, ever be afraid to make some noise and get in good trouble, necessary trouble.”

House Speaker Pelosi released in a statement a tribute to Lewis: “Today, America mourns the loss of one of the greatest heroes of American history: Congressman John Lewis, the Conscience of the Congress.”

After funeral services for Lewis in Alabama, horse drawn carriage carried his body over the Edmund Pettus Bridge in Selma, ending in a salute by the same branch of state troopers whose predecessors had beaten him in 1965. Lewis’s body arrived at a Maryland Air Force base on Monday. He was escorted by motorcade through the streets of Washington, D.C. and Capitol Hill, passing the Martin Luther King Jr. Memorial and the new Black Lives Matter Plaza. His body would lie in state in the rotunda of the United States Capitol Building — the first Black lawmaker to lie there — on Monday and Tuesday, followed by a public viewing that drew crowds stretching as far as the Supreme Court building.

On Thursday, final tributes will be paid to Lewis at the historical Ebenezer Baptist Church in Atlanta, the church once led by Dr. King. After the private funeral, Lewis will be laid to rest at South View Cemetery in Atlanta.

Since his march across the Edmund Pettus Bridge in Selma, Lewis has strongly preached the importance of one’s right to vote– a relevant call to action with the 2020 election quickly approaching. He once said, “My dear friends, your vote is precious, almost sacred. It is the most powerful nonviolent tool we have to create a more perfect union.”