You are at:Home»Metro Events»Congresswoman Norton kicks off 12th campaign
Tweet 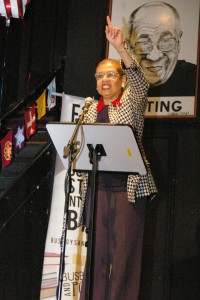 WASHINGTON – Congresswoman Eleanor Holmes Norton kicked off her campaign for a 12th straight term on Capitol Hill Saturday with a celebratory rally to garner support from Washington D.C. voters. Currently, Norton’s contenders in the upcoming 2012 election include Republican of the Statehood Green Party.

For the first time in history there will be an early primary. Norton must collect the signatures of 2,000 D.C. residents by January 3 to have a place on the ballot. Guests at the rally, including Maryland Democratic Congressman Steny Hoyer, the event’s host Jeannie Jones and the tap dancing sensations The Manzari Brothers, entertained the crowd in an effort to jumpstart the campaign.

“To see so many of you show up so I can get on the ballot by January 3 warms my heart and pumps me up,” said Norton to the enthusiastic crowd on hand at Busboys and Poets in downtown Washington. “The bell sounded, so I am running hard to go right back to the Congress to do exactly whatyou want the Congress to do and I know what that is,” she said to the crowd. 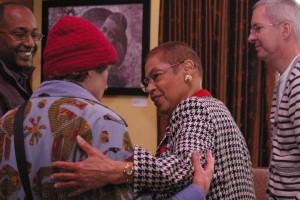 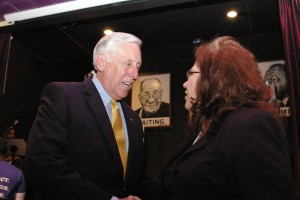 Hoyer, the former House Majority Leader and current Democratic House Minority Whip, engaged the crowd before Norton took the stage, likening the congresswoman to the Dahlia Lama, MohandasGandhi and Martin Luther King Jr., whose faces were displayed on banners overlooking the stage.

Said Hoyer, “Eleanor Holmes Norton is not somebody that [will]sit quietly in the corner and not speak up for those that need a voice.” 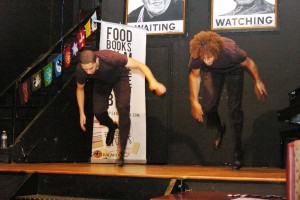 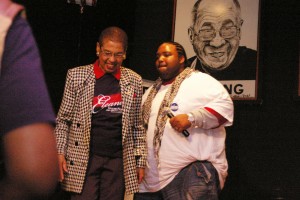 Norton has dedicated her career to fighting for the citizens of the District, including her ongoing battle to convince Congress to grant full voting rights to the District’s representatives on the Hill.  Norton is the current delegate representing Washington.

Her greatest obstacle has been the Republican Party, which after a 2010 takeover of the House, retracted Norton’s right to vote on procedural matters and amendments on the Committee of the Whole House.

“I am running for D.C. jobs and D.C. statehood and I am running to tell the Tea Party and the Republican Party, don’t even try to take the home-rule we have because we’re going after the statehood we deserve.” She continued, “Regardless of who controls [Congress] this morning, I am here to let them know they will not control the District of Columbia.”

Hoyer stressed Norton’s long service in the House and her commitment to constituents. “In the last 20 years, there has not been a day that’s gone by that she hasn’t raised the interest of the District of Columbia, the Washington D.C. area and the residents of America,” he said.