You are at:Home»Poetry»Spotlight on Poets»Kevin Brown: Using poetry to inspire hope for an “Opposite World”
Tweet 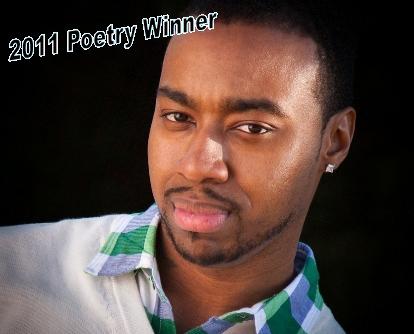 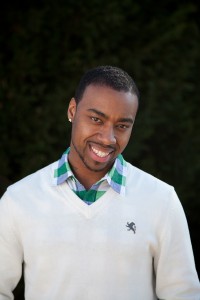 Kevin Brown, a 25-year-old account manager and new father from Ashburn, Virginia, won the DC Spotlight’s fall poetry contest.  His poem, which ponders a world turned upside down where everything is reversed from the norm, took first place in the competition.  The poem, “Opposite World,” begins by asking the question, “What would it be like to switch our left and right shoe? What if the sky was green and the grass was blue?”

“I was just sitting around with my pad, and I was thinking what do I want to write about?” said Brown, who admitted that he is never at a loss of topics to tackle. “Once I started writing, my pen was just flowing. Ideas were just coming to my mind. It just hit me.”

Brown continues, “What would it be like if this world was completely flipped? How would our perception on the world look? That would be something interesting. I decided to call it “Opposite World” and thought ‘I’ll start [asking]what if this was like this or that was like that?’”

“Opposite World” is one of the latest poems written by Brown. He began his career in 2009 and since then has composed enough material to build a manuscript and start publishing his work.

“When I started writing the poetry, I can definitely feel it in my heart,” said Brown, who ends the last line of every poem with the title, a trait that allows his work to come full-circle. “I just grew a passion and I just knew that’s what I wanted to do. Poetry definitely comes easy for me now.”  He is currently part of an online poetry community that features thousands of writers sharing their poetry.

“There are thousands and thousands of people out there. I love reading their poetry [and]commenting,” said Brown. “[I enjoy] just seeing how everybody else uses their words and where they get their creativity from…Anything that I read I take heart to.  Because I have such a great passion for it, I can relate to any type of poetry out there,” he added.

One source of motivation for Brown is Maya Angelou, who he confessed has always held a special place in his heart. Angelou is renown globally for her writing and her work has been nominated for the Pulitzer Prize. She was recently awarded the Presidential Medal of Freedom—the highest civilian honor in the United States—for her work as a writer, activist and Civil Rights leader.

Her poem, “We Had Him,” which was written as a tribute to late singer Michael Jackson and recited by actress Queen Latifah at Jackson’s funeral in 2009, stuck with Brown, driving him forward with his own poetry.

“I love [Angelou’s] work,” said Brown.” The depth of her words and creativity is amazing to me. I can feel her words.  It’s something that really stands out. I can see the colors in her writing, so it’s something really, really interesting to me.”

Like Angelou, Brown has also composed a poem about Jackson. Throughout the poem, Brown cleverly weaved Jackson’s songs in an effort to tell his story. It represents a unique way to pay tribute to the King of Pop and Brown intends to send the poem to Jackson’s mother as a gift.

It is that type of heartfelt writing that has always been a major part of Brown’s style. According to him, it stems from his desire to be there for other people and from his passion as a motivational speaker.

“I’ve actually reached out to kids like teenagers and others,” Brown said. “Parents have actually come to me and asked me to speak to [their kids]and help build their spirits up. I actually have a couple blogs out there that I’ve started, about motivational speaking, just keeping your spirits up and positivity. So I do like writing, not just poetry, but positivity.”

One of Brown’s favorite’s poems that he has written, titled “Trapped in Sorrow,” narrates a man who is down on his luck and according to the author, completely sad inside.

Brown has also considered writing books for children, combining his poetry and motivational speaking with illustrations. “Kind of like Dr. Seuss [and]“The Cat in the Hat,” Brown said. “Small words and everything rhymes.”

Brown intends to write and read children’s books for his son, Tyson, who was born six months ago. His father already admits to writing poetry dedicated to him, that he composed in the days leading up to his birth.

“It’s called “A Father’s Ambition,” Brown said proudly.  “I think he’s really going to appreciate that. It took a lot of heart to put into that one. I will definitely share that with him and hopefully he cherishes it.”

Brown envisions eventually starting a website, which would combine his poetry with motivational speaking and writing for children.  “I want to put all of that together and reach out as much as I can. I feel like I have that gift,” added Brown. “I have that ability to help whoever it is with my poetry, motivational speaking, [and]writing. I definitely feel like that’s what I’m suppose to be doing.”

What would it be like to switch our right and left shoe?
What if the sky was green and the grass was blue?
What if the universe was Earth and our world was called Space?
Does that mean aliens live here with no trace of human race?
How about if we read from the right to the left
And the meaning of blind was defined as deaf
If our world was like this, would we be confused and ask how?
Writing this same exact poem but mind painting our world now
What if everything was perfect, no disasters and no crime
And when you made a mistake, you could turn back time
What if music was called games and what you heard was called playing
Fire was ice cold, and ice was hot blazing
What if the number two really meant zero, none
And the end of a story was where it really begun
Would everyone be scared to live in this world for a day?
Probably, besides we’ve only seen one way
What if a King was called Queen and a Queen was called King
And when you were full really meant you were starving
Planes don’t fly here, here they sail and ship
It’s like going back in time and seeing the world has flipped
Now that I altered your perception and got your mind all curled
You just took a look at “An Opposite World”

Kevin Brown can be contacted at Brownk.kevin@gmail.com.