You are at:Home»Health»Healthy Living»Adopt a pit bull; improve your health
Tweet 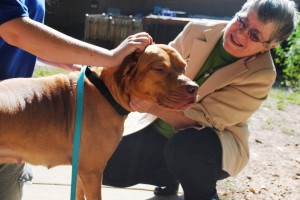 Nevie Brooks, a 23-year-old employee at the Montgomery County Humane Society (MCHS) in Rockville, Maryland blogs about her experiences with animals, particularly pit bulls. While the breed has gotten a bad rap over the years, Nevie and others like Aleksandra — who fosters dogs, including pits, for MCHS — are determined to save their reputation. Aleksandra’s blog, Love and aLeash, has inspired multiple pit bull adoptions, including Little Zee and Lollie, now known as Lily. She is currently fostering a pit bull named Georgia. In order to familiarize interested adopters with the breed, MCHS held a Pit Bull Awareness Day on SaturdayOctober 22.

It’s no secret that having a pet brings all kinds of health benefits to their human owners. According to the Centers for Disease Control and Prevention (CDC), pets increase “opportunities for exercise” and “opportunities for socialization.” Walking thedog is a good reason to exercise, and increases the opportunity to meet other dog lovers with their dogs and strike up friendships. The National Institutes of Health (NIH) have performed multiple studies that showcase the long-term health benefits of walking dogs. In a study of 2,000 adults, dog owners who regularly walked their dogs were significantly more physically active and significantly less likely to be obese than non-owners. In a study of 2,500 adults between the ages of 71-82, regular dog walkers walked faster, had greater endurance and greater mobility in their homes than adults of the same age without dogs. 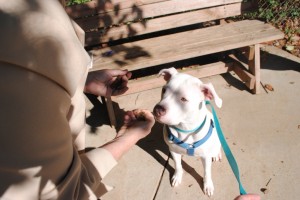 Exercise is just the beginning. Other studies have shown that human and dog interactions prevent loneliness and depression, on a chemical level. A five-minute interaction with a dog can increase oxytocin levels, the same chemical that creates happy feelings from exercising or interacting with a loved one. A 55-60 minute interaction can lower the heart rate. Another exploratory study shows the positive effects of short-term interactions between dogs and their owners’ oxytocin, cortisol, insulin and heart rate.

Still, another NIH study found that adults who had heart attacks were significantly more likely to be alive one year later if they owned a dog. In fact, dog ownership was the strongest predictor of survival. A follow-up study linked dog ownership to the prevention of depression in owners. Survivors of heart attacks who had dogs were less likely to be depressed than those without dogs, regardless of the presence of supportive family and friends. The study of human and animal interactions is in its early stages, but it is clear that long-term interaction with a dog is beneficial to human health.

So why choose a pit bull? BJ Altschul, director of external relations at MCHS, and Brooks agree that pit bulls are “family dogs” and “people-centric”. For example, Sugar, a one or two-year-old pit bull, is a white ball of energy whose enthusiastic greetings make her a popular hit at the shelter’s meet-and-greet on Saturdays. Before she came to the shelter, she was a stray found on the porch of a family home. Although Sugar is clearly affectionate and fond of people, her breed tends to have a longer turnaround time at the shelter, because families aren’t interested in looking at them. Brooks says “a good ambassador for the breed” like Sugar “opens [people’s] minds.” 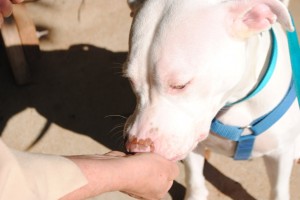 Kayla, another pit bull currently available for adoption at the shelter, is calmer, around three-years-old, and more of a “dog’s dog.” She likes to chase squirrels and tease the shelter’s pen of chickens, but she also likes to be petted and is extremely affectionate with humans. Some recent pit bull adoption success stories include Tanner, a winsome dog who was a favorite with the staff. Tanner’s new owner, a pit bull veteran, came fully clothed in a suit to pick up the pet. Remy, another staff favorite and successful adoption story, left the shelter with a new family on the same day.

For those who have concerns, Altschul explains that it’s important, when adopting any dog, to be attentive to their body language. When pets exhibit undesirable behaviors, like lunging or snapping, it is often possible to train them out of the behavior if the owner is vigilant and willing to pay attention. Altschul describes her experience with her 10-year-old beagle, Cori, who liked to lunge at other animals. If she notices the other animal first, she will preempt Cori’s behavior with a treat, rewarding her for not reacting. When asked about how animals have affected her life, she says, “I go where my dog goes.” She admits that it’s changed where she socializes and changed her conversations, which tend to focus on animals. Cori accompanies Altschul to youth and community groups, as well as senior homes. Many senior homes have recognized the benefits to residents of having permanent pets, and some have looked for pets at the shelter. Altschul and Brooks explain that often a dog is in the shelter because of something a person did wrong, not the dog.

Potential dog owners don’t have to get a pit bull to enjoy the considerable (and growing) list of health benefits. However, it’s possible that a pit bull like Sugar, with her showering of affection, will bring more opportunities for raising oxytocin and a pit bull like Kayla, who loves to investigate, will give an owner more of a healthy workout. With all of these benefits to humans, owners can help save a life while improving their own.

For more information on adopting a dog, visit http://www.mchumane.org. If you have kids and are looking to adopt, Altschul recommends http://www.livingwithkidsanddogs.com.

RESOURCES:
There are growing programs across the D.C. area where dogs can help children who have difficulty learning to read. The idea is that the children will read aloud to dogs, who won’t judge them, and afterward they are allowed to play with the dog. For information, visit
http://www.fidosforfreedom.org/therapy-dogs/dear-teams/dear_intro.php