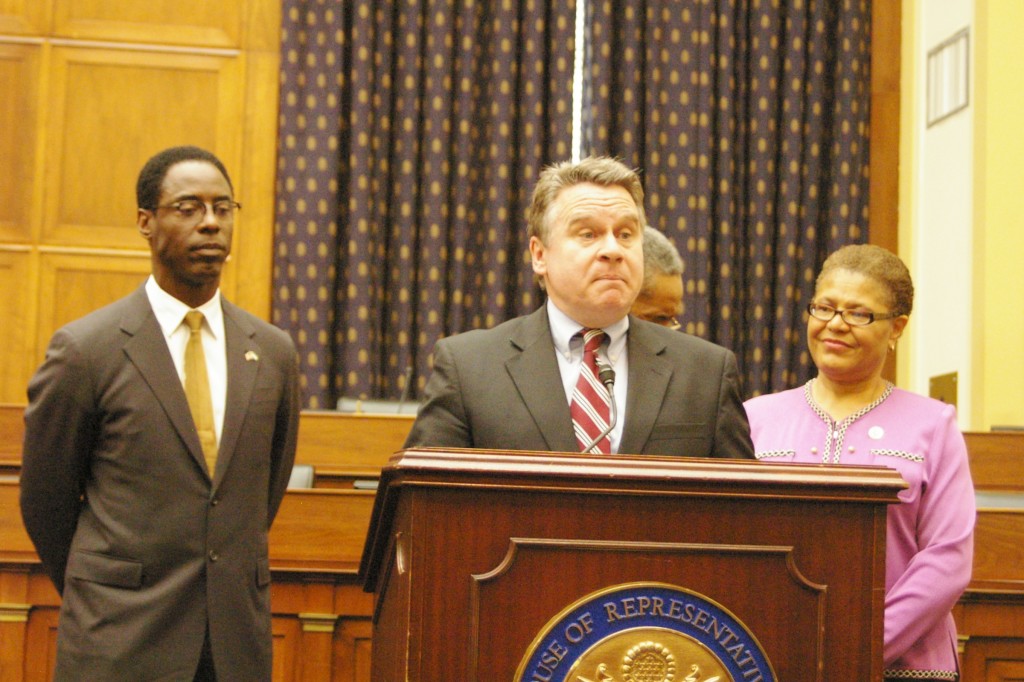 May 1, 2012
By Jordan Schatz
Reporter/News Writer
The Nation

WASHINGTON – In the spring of 2000, President Bill Clinton signed into law the “African Growth and Opportunity Act” (AGOA), which led to the creation of more than 300,000 jobs in Africa while earning the continent more than $300 billion in export earnings.  Now, a newly proposed bill will allow Africa to give back to the U.S.

“Africa is filled with entrepreneurs: the men and women who, if given the opportunity [and]if we can create more of a bridge, will excel and Africa will grow as never before economically,” said Rep. Chris Smith (R-N.J.) prior to a hearing on April 17 that focused on the legislation. “[Africa] is already, itself, an exporter of huge proportions but will go even further in that direction.”

Led by Representative Smith and supported by both a high profile actor and prominent members of Congress, the new bill, “The Increasing American Jobs Through Greater Exports to Africa Act” has the potential for significant job growth in the United States, while further connecting Africa’s economy with the rest of the world.

“Without a doubt there needs to be more trade with Africa,” said Smith, who has provided unwavering support of Africa throughout his career and has a track record of supporting human rights on the continent and all over the world. “We have focused rightfully on trying to help Africans eradicate some of the other most debilitating diseases on Earth like the pandemic with AIDS, malaria and other issues [such as]measles [and]the hunger issues.”

The bill will improve upon AGOA, which was signed into law on May 18, 2000 and later extended by President George W. Bush in 2007.

“The focus of [AGOA] since its passage in 2000 has been on increasing African exports to the United States and the resultant job growth on the African continent,” Smith said in his opening remarks to the House Subcommittee on Africa, Global Health and Human Rights. “This policy has neglected the job growth here in the United States that could be created through increasing U.S. exports to Africa.”

According to Assistant Secretary of State Carson  — who is also the head of Bureau of African Affairs — Africa has long been considered a gold mine of economic expansion and untapped resources.

“We believe it is important to promote creative trade between the United States and Africa,” said Carson. “Africa is a continent with enormous economic potential and we think United States companies should be focused on that investment potential.”

Increased exports to Africa by American companies will also aid in alleviating the stresses on a United States economy struggling with substantial debt and poor job growth.

“The benefit [of the bill]is [that]for every billion dollars of exports, there’s six to seven thousand new jobs created,” said Smith. “We’re in a huge economic mess in the United States. The debt problem is only one of it. A jobless recovery is another. One way of creating jobs is to find new export markets [and]new consumers.”

According to the U.S. International Trade Administration, the United States receives 20 percent of the continent’s total global exports, making it the leading importer of African goods in the world. Now, Smith and others are promoting a bill that will operate in reverse — allowing Africa to become the foremost importer of American goods. Currently, China is the leading exporter of goods from Africa.

“The perception of Africa as poverty filled and strife ridden continues to persist,” said Carson in his address to the subcommittee. “In many places, corruption is too common. The cost of finance, including investment finance, is too high. Infrastructure is lacking. Regulatory systems are often inconsistent and inefficient. Because of these barriers, many U.S. businesses see African markets as too risky. We work closely with African governments to address these issues and improve investment.”

Representative Rush proclaimed during the hearing in Congress, “For a long time, Africa has been portrayed exclusively as a war-riddled continent filled with dictators, poverty and disease, yet the true story of its country-by-country reawakening and revival and the story of many great successes remains untold. Seven out the ten fastest growing economies are today in Africa.”

The bill will encourage more American companies to build in Africa, with the focus on Sub-Saharan countries and with a concentration on goods such as agricultural and irrigation.  The bill has also gained considerable praise from Washington, who, as an international actor, views the legislation as an opportunity to bring about change in Africa.

“I’ve been very curious with Africa since I was about 19 years old,” admitted Washington, who was able to trace his ancestry back to the Mende and Temne people in Sierra Leone, Africa. “I didn’t understand why but I’ve got a lot of leadership and I read a lot of books…on why there were certain revolutions and evolutions…Since I got my DNA, I realized I’m going to drop the ‘R’ in revolution. I’m going to drop the ‘R’ in racism [and]I’m going to drop the ‘R’ in reparations,” added Washington. “One way I can eradicate racism and get those reparations and not die in a revolution is to evolve as a business person. If we evolve as a business person then, how can I use my celebrity to bring competent business persons to Africa? If we do something well or will we do something right then if it’s making money for everybody and everybody’s being educated in the economy and the GDP [gross domestic product]is rising?  Then you’re getting your reparations, racism is being eradicated, and then there is no need for revolution.”

The 48-year-old actor is heavily involved in Sierra Leone and is recognized for founding the Gondobay Manga Foundation, a goodwill group to support the African region. Most notably, he provided the funding to have an elementary school built in Bohol, Sierra Leone, West Africa in 2007.

“I focus on one village at a time,” said Washington, who admitted in his testimony for the House Subcommittee that he felt obligated to aide in the reconstruction of Sierra Leone.  “I have a student body of about 400 students from kindergarten to fifth grade, [at the Chief Foday Golia Memorial School]which they asked to have built. I didn’t build it. I provided the funding for it.”

For Smith, the new bill represents a move in the right direction.

“African counties, except for Sudan and a few other notables are democracies and they are flourishing,” said Smith. “If given the opportunity they will go off like meteors— straight up. So it’s very encouraging, and at a time when the world is awashed in debt and all the problems economically, Africa could be the money saver for the entire world. It is where the focus ought to be going forward.”