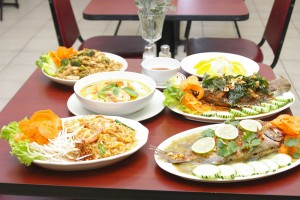 Ramaesh Bhagirat, owner of Thai Orchid’s Kitchen in southeast, Washington D.C. is soft spoken and laid back. He readily greets his patrons with a smile or a nod of his head.  He strikes up a conversation easily and comfortably with just about anyone. Knowing his persona, one might be surprised to learn that his restaurant was robbed in late December, but the tragic memories of the experience are constant and fresh in his mind even today.  “Three of them walked in the door, just like customers,” he recalls.  “One of them walked straight to me. He showed me under his coat; he had a gun.” 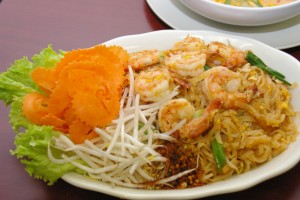 Walking through the door of Thai Orchid’s Kitchen, located at 2314 Pennsylvania Avenue, the pleasant aromas — a hint of curry, perhaps a trace of a sweet sauce or the smell of peanuts or fresh basil – overtake the senses. The atmosphere is relaxed as Bhagirat flashes a smile. He may suggest starting with Thai Ice Tea, as he hurries to the back where his team of family members is busy with the day-to-day tasks of the restaurant.  Elephant tapestries and flying dragons decorate the walls.  The melody of classical music plays in the background, while a regular customer such as Ronnie Streff enjoys a meal.  Thai Orchid’s Kitchen offers a peaceful environment and good food, but on December 28, 2010 at around 7:50 p.m., three 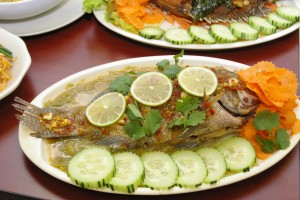 unidentified men terrorized Bhagirat and his family, robbing them at gunpoint.  The experience threatened Bhagirat and the safety of his family.  He contemplated packing up their dream of owning their own restaurant and leaving southeast.

Bhagirat stated: “I couldn’t do anything. The other two walked straight to the back. My daughter was there. We had another helper.  They put a gun to her head and told her to open the cash register.” Bhagirat’s wife, Donna, was in the kitchen. “My wife, I think was doing dishes or something, and she walked straight into him. He had a gun in his hand and told them to go down on the floor.” 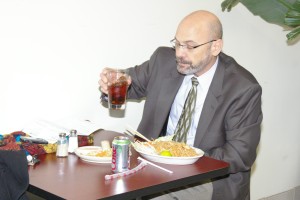 Thai Orchid’s Kitchen opened about seven months ago. Bhagirat, originally from Guyana, married his wife five years ago.  “She’s always wanted to get a restaurant – something of our own. It’s family-owned, my wife and I, and we just have family working with us.”

To the metro area and DC residents, southeast is often known for crime, largely attributed to the drug trade and poverty. Wards 7 and 8 suffer from the highest poverty rates in the District of Columbia. Crimes range from property theft to assault and from homicides to street violence. With minimal shopping, dining, entertainment or cultural services, Thai Orchid’s Kitchen offers something unique to southeast. Defeat Poverty DC, a coalition of organizations and residents, reports that low-income communities such as Ward 7 and 8 even lack access to grocery stores. There are thirty chain supermarkets in the District of Columbia; only two can be found in Ward 7, and one in Ward 8.

Despite this, Bhagirat, whose three sons attend colleges in Chicago, asserts that prior to the robbery he never felt unsafe in the area. In fact, he unabashedly calls Ward 7 his home. “I’ve lived in southeast for 17 years. I took my kid across the bridge to school every day,” he said.  “I cross the Anacostia Bridge practically every day, so I know this area to be very good. I’ve never had any encounter with anybody trying to rob me. My kids never had any problems with anybody trying to rob them or anything like that. A lot of people were surprised that we opened on this side of the bridge; I mean, this is Anacostia. There are some good parts to southeast and some bad parts. I know there are drugs, but this is a good side where we live on. I know it’s going to get better, but we don’t know if we can hang on.”

Bhagirat works for a management company in order to pay the mortgage on his house, since the restaurant is still young and financially struggling.  “The only way we could have owned this is because the rent is not as expensive as if it were on the other side of the bridge. We cannot afford a restaurant on Capitol Hill.”

Bhagirat insists, “When the guys came to rob us, I said ‘Why are you robbing us? We don’t have much cash here. We don’t even collect cash all the time.’ I went to the bank that day to get some money for – my kid was visiting from Chicago and I had taken some money out. The guy, he pushed his hand into my pockets and he got the money, but that was nothing. I’m glad no one was hurt,” he says in retrospect.

The robbery has undoubtedly shaken this family, and they have been trying to get past it. Bhagirat says it’s been difficult. “I got scared for my life. I couldn’t do anything; I just froze. My daughter was terrified,” he says. “She did not want to come back into the restaurant for quite a while. This is an experience we’ll never forget. Everybody who opens that door, we want to know if they’re going to rob us.”

Yet, Thai Orchid’s Kitchen has received a lot of support from an unexpected place – its fellow neighbors. On the night of the robbery, Veronica Davis and other loyal customers rallied support for the owner via listservs, Facebook and Twitter. The next day, residents from Ward 6, 7 and 8 showed concern for this local business by visiting the restaurant and sitting down for a meal.  Through their actions, customers sent a loud message to Bhagirat and his family: We want you to stay.  In a predominantly African American neighborhood, locals showed up to voice their outrage regarding the robbery and give their support.  Community outreach and support has kept Thai Orchid’s Kitchen from shutting down. In fact, on the day DC Spotlight reporters visited the restaurant, the River East Emerging Leaders organization — a progressive network created to engage and empower the River East community — held a meeting and dined on Thai cuisine at one of their favorite local restaurants, Thai Orchid’s Kitchen.

Bhagirat stated: “We’re grateful for their support because if it wasn’t for them, we would’ve really felt bad still. As we go along, we’re getting support from the community. People are ordering a lot of food, coming in more often, organizing parties here. We need that.”

Thai Orchid’s Kitchen was originally designed to be a carryout; however, the Department of Consumer and Regulatory Affairs notified Bhagirat that he had to open a restaurant. “With the carryout, you have to get the glass — an inch and half thick,” he says with disdain.  “When we first got here there were panhandlers outside. I work and my wife, her cousin and sister are the ones behind there. They don’t speak too much English. I was afraid for them mainly, and that’s why we wanted the carryout. When we went to get the permit, the city DCRA said it’s zoned for a restaurant, a sit-down restaurant. We had to take the glass down. We’re glad in a way, because we can interact with customers. When you have the glass up, you cannot do that. We enjoy talking to the customers, and most of them just love the food.”

The fact that Thai Orchid’s Kitchen is a sit-down restaurant serving good Thai cuisine has worked to its advantage. Additionally, if community support continues, the restaurant may finally find a strong financial footing in today’s economy. These factors may also make it a target for robbery, but recent community actions seems to suggest that the residents won’t let that happen or at least, they will attempt to prevent it. The restaurant has surveillance cameras and regular patrolling, but it has benefited mostly from its local customers.

“I grew up on Chinese food,” Bhagirat jokes. “Thai food is new to me, probably only in the last ten years, but now that’s all I eat.” He pauses, as members of the local REEL organization come into the restaurant, then states: “I feel like I have more support from the community. We’re seeing a lot more of the community coming in and we wish it continues, because we do need their support. They’re the ones spreading the good news about the restaurant.  As I said, we’re on this side of the bridge, this side of the river.  My wife is a cook. She’s worked at most of the Thai restaurants on Capitol Hill, and she can cook! People have talked about the food; they just love it. The good thing is that it’s ours…family-owned.”