You are at:Home»Features»Limelight»The Top 10 (#7) Ivy Rose: Prepare to be inspired and rocked
Tweet 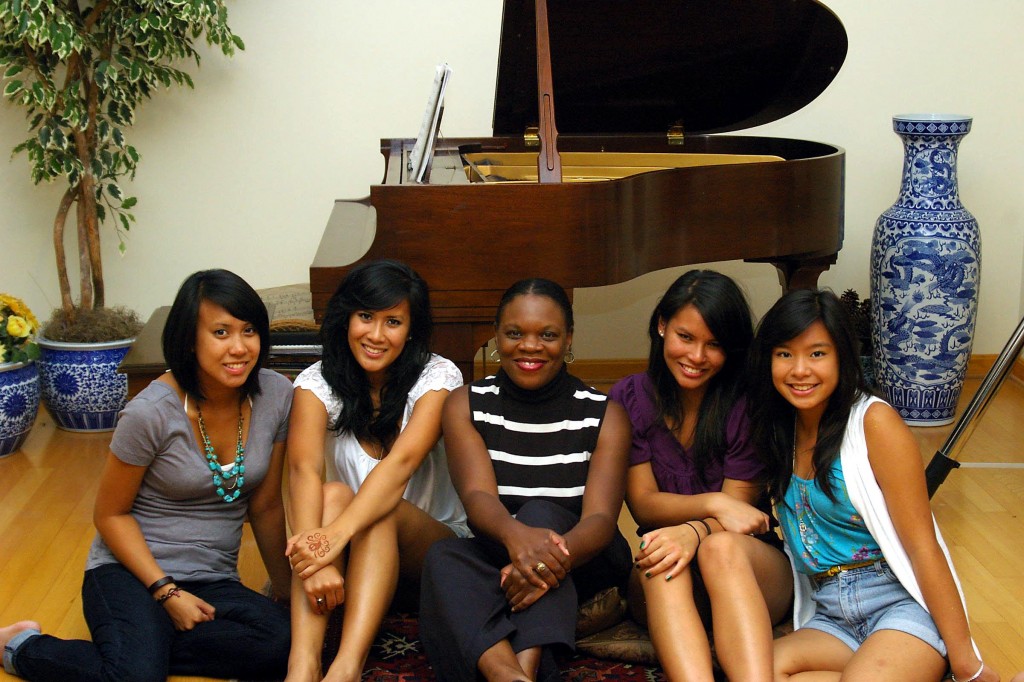 There is a strong possibility that upon entering the door of Lynn and Tito De Leon’s home in Gaithersburg, Maryland, you will be greeted with a pleasant aroma, just before Lynn insists that you’ll have try her cooking.  It’s hard to resist

wrapping up a Turron (a sweet plaintain spring-roll) to take home, but Lynn will again insist, as everyone dines at the colorful buffet she exhibits to guests, but was especially prepared for our reporters.  As one of the managers of the group, she is the figurative icing on the cake when meeting Ivy Rose.  Standing in her kitchen, you might catch that twinkle of excitement in her eye, which indicates that she has something special for you and what she and her husband have created is definitely special.  One of her daughters might shoot you a smile, as she hurries past to see what waits in the kitchen, before heading downstairs for band practice. This is a house full of life, family and music. Ivy Rose is a rising band that has already gained popularity and credibility on the music scene here in the Washington, DC metro area.  With a combination of the De Leon sisters, Isabelle, Kristine, Sarah and their “sister at heart,” Martina San Diego, this band is determined to keep sharing their art, while nurturing and improving their musical skills.

Ivy Rose recently released the album, “This Adventure.”  The album shows that these girls not only play wickedly, but that they have distinct style.  Their genre varies from alternative to rock, proving to any boy band that they can surely “kick butt.” When asked where the inspiration to write songs such as “Runaway” or “Pilot” (which deal about the struggle to let go of situations or people) came from, the band draws on their own experiences. “You can’t write anything raw or real if it’s nothing you can relate to,” Martina states.  Isabelle also adds that “reaching out to people is a powerful thing,” and can be inspirational as well.

Although the band hopes to get a recording deal, tour the world and continue sharing their music, they stay well-grounded, pursuing their academics actively and with one foot firmly planted on the earth. Kristine is pursuing an architecture degree and toys with the idea of having her own firm one day. Isabelle is a double major in college in both music and biology and wants to be a doctor. Sarah jokes that she’s a “triple major.” She is still in high school, but is interested in following in her dad’s footsteps and studying the technical side of music. Martina hopes to pursue music education after high school.

There is a saying in the De Leon home: “Much is given, much is expected.” Lynn and Tito De Leon have supported their daughters and continue to do so, not only as parents, but also as managers who stay on top of their schedules and priorities.  They find solutions to problems and encourage the band members to maximize their time.  “Dad started us playing. He’s the one that brought the first drum set home and got us our equipment,” Sarah states. Tito deals with most of the technical aspects such as sound and engineering and even manages the family’s small recording studio. “Our mother is the cook and makes sure we’re all sane,” adds Isabelle.  Lynn also makes sure that “they start and end the day with a prayer.” “I always tell them that when you have God in your life, you make the right decisions,” Lynn asserts.  Martina’s family is also involved, never missing one of her gigs and giving her constructive criticism. Her father is a web designer and constructed the Ivy Rose website.  Although Ivy Rose must manage their time well and may often lose sleep balancing their academics and music, they get all the nurturing and support they need inside their home.

Some might be surprised by the down-to-earth, inviting and warm personalities of the girls that make up Ivy Rose.  Not only are they having the times of their lives making music together, but they also have the ability to laugh at themselves.  They commonly refer to themselves as “goofballs.” Sarah states how a friend recently told her, “On stage you’re like so cool, but when I meet you in person, you’re so weird.”  This is just one more thing that makes this band unique.  On meeting Ivy Rose, one gets the feeling of being around your own family.  They bring an energy to their music, but have no doubt that when they perform they bring a fierceness and edge you might not expect, and it will definitely inspire and rock you.