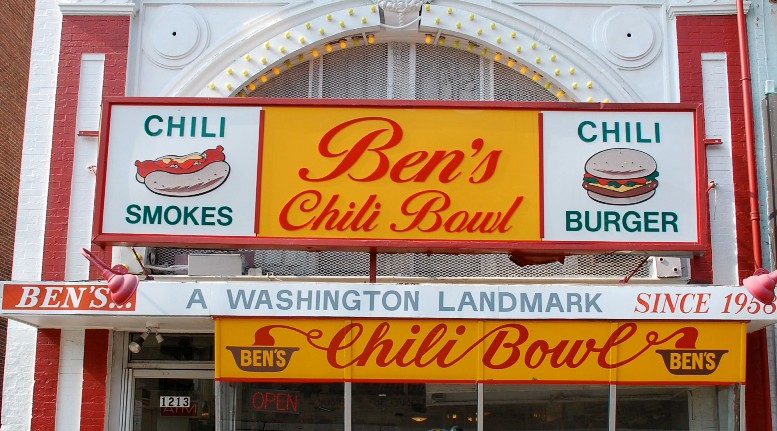 If after calling Ben’s Chili Bowl you find yourself placed on hold (chances are you will—the restaurant is very busy), the recording you’ll hear is of comedian and TV star Bill Cosby, thanking you for dialing his favorite Washington D.C. eatery.

Cosby began dining at Ben’s Chili Bowl when the restaurant first opened in 1958, forming a close friendship with the establishment’s founders, Virginia and Ben Ali. From then on, whenever Cosby made a trip to the District, he was sure to stop by Ben’s for the legendary half-smoke chili dog –the signature dish for which the iconic restaurant is famous—and to say hello to Virginia, who, despite passing ownership duties onto her sons, still spends much of her days in the Chili Bowl. Her husband Ben, who began the restaurant following his graduation from Howard University, passed away in October 2009. He was however present that January, when President-elect Barack Obama dropped by for a bite to eat on his way to the Oval Office, adding himself to the long list of famous and ordinary customers to wait in line for some of the country’s best-tasting chili.

The restaurant is located on U Street, once known as ‘Black Broadway’ and made famous by artists, such as Ella Fitzgerald and Duke Ellington, who frequented the many theaters on the block. Ben’s Chili Bowl has been a fixture in the city for half a century, feeding people from all walks of life—from celebrities, such as Cosby and the president, to the average person on the street.

Ask Virginia however, and she will inform you that it wasn’t until August 22, 1998—the Chili Bowl’s 40th anniversary—that she realized just how special her restaurant truly is.

“I think what stands out most to me was when my sons decided they were going to celebrate 40 years of being in the business,” said Ali, who sits in the dining area of the restaurant surrounded by photos of some of the establishment’s more noteworthy customers, including Denzel Washington, Danny Glover, Chris Rock, Dr. Dre, and Redd Foxx.  “The response was so overwhelming. To see all the news networks here and to see people come to this place and stand in line all day. There was a line a block long in the hot August sun to buy a hot dog. We weren’t giving anything away that day.  It was overwhelming and I began to realize then, maybe we do mean something to this town.