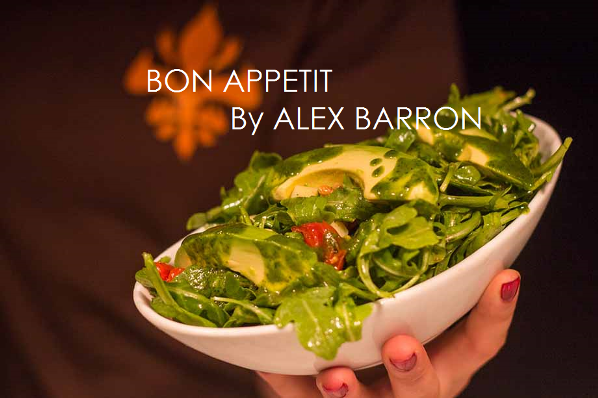 There’s something eminently satisfying about a good upscale pizzeria. Such places almost never seem to suffer from the common complaints of small portion sizes or overly precious preparation that sometimes plague other fancy restaurants. At the right spot, it’s easy to feel hip and trendy – and it’s easy to satisfy your taste buds without experiencing the suspicion that you may have just been robbed. 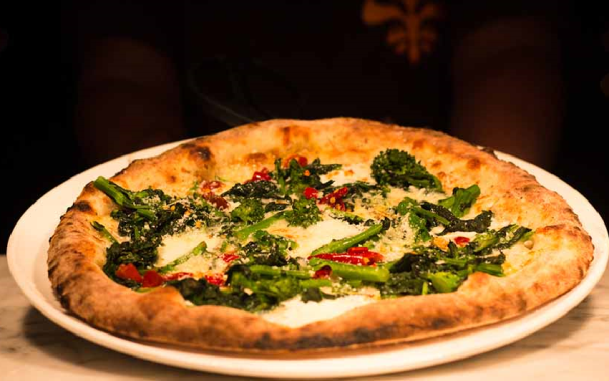 A good upscale pizzeria is also usually welcomed to the neighborhood with open arms. Certainly, this was the case for Ghibellina, which immediately fits right into the landscape of 14th Street, south of Logan Circle, where it opened two years ago. Quality pizza, with a crust that is both well-charred and pleasantly chewy, is a simple, yet effective draw. This is never truer than during Happy Hour, when Ghibellina offers some of the best and, increasingly – as Logan Circle denizens start to catch on – the most popular deals around.

Ghibellina makes the most of its building’s exposed brick walls and wooden planks. These features, along with wrought iron light fixtures, drafting table stools and well-stocked shelves behind the bar, give the impression of an old-world wine cellar. Its slightly gothic look is at odds with its generally festive atmosphere, however, especially during spring and summer afternoons when the after-work Happy Hour crowd spills onto a small patio in front.

The special menu, which offers half price beer, wine and selected pizza between the hours of 4 and 6:30 daily (even on weekends), is good cause for festivities. It seems hard to believe that a pizza as flavorful as the Finocchiona (normally $17; $8.50 during Happy Hour) can be had for significantly less than the cost of a generic pie from Papa John’s or Domino’s. This blend of sweet and savory, featuring fennel sausage, fresh fennel and fennel seed, dusted lightly with pecorino and dotted with olives, is one of the best combinations on tap. More familiar offerings include a solid Margherita ($16), a classic mix of mozzarella, tomato and basil, and a rich Quatro Formaggi ($17) smothered in a mélange of mozzarella, ricotta, Padano and Pecorino Romano. Of course, half the fun of eating these pizzas is getting to cut them with a pair of scissors nearly the size of gardening shears. They’re a great little feature that manages to feel quirky and original instead of gimmicky.

Needless to say, pizza steals the show here – especially on the Happy Hour menu, where it is the only discounted food offering – but there are plenty of other delights to be found. The antipasti section of the menu features a generous hunk of Burrata ($16) drizzled in olive oil, as well as light and crispy Fritto Misto ($14), a mix of seafood and fried polenta cubes. The surprisingly pillowy homemade Gnocchi Alle Verdure di Stagione ($17), tossed with asparagus, mushrooms and goat cheese, is another winner. Dessert options include one of the better Panna Cottas around ($8), a simple, yet addictive bowl of thick vanilla custard, and a rich and decadent Torta di Formaggio ($8) which combines cream cheese, goat cheese and crème fraiche, as well as a filling of seasonal fruit.

During the Middle Ages, the Ghibellines were a faction that supported the pope, but co-owner Ari Gejdenson’s connection to his restaurant’s name isn’t quite as lofty. It was the name of the street where he and managing partner Ralph Lee lived during a residence in Florence. Gejdenson, a native Washingtonian who also played professional soccer in Italy, seems to know both locales well. He knew well enough to hire the talented Jonathan Copeland, formerly of Cleveland Park’s highly regarded Palena, as his head chef. Copeland’s experience seems to be paying dividends like the burger at Palena, which achieved local legend status in some circles. Ghibellina’s pizza is simple, elegant comfort food, and in just two years, it has become a centerpiece on a street that has become a foody’s paradise.