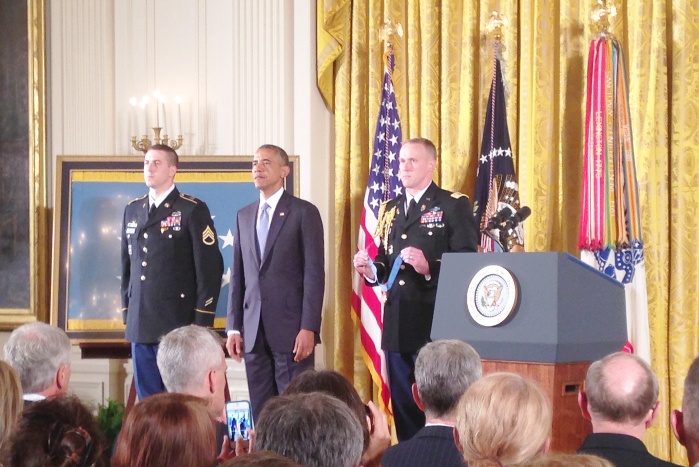 WASHINGTON, D.C – On Monday, July 21, 2014, President Barack Obama presented the Medal of Honor in a ceremony at the White House to former Army Staff Sgt. Ryan M. Pitts for his display of courage and bravery in one of the most brutal battles of the Afghanistan War.

Pitts, 28-year-old and from Nashua, New Hampshire, is the ninth living recipient to be awarded the countries’ highest award for valor in combat. Other fellow Medal of Honor recipients were also in attendance at the ceremony.

Upon being presented with the medal, Pitts shared with the president that the award was not his alone but belonged to everyone there that day during the attack on July 13, 2008 in Wanat, Afghanistan. He said they did it together.

Throughout the ceremony, Obama described the events that took place on that early summer day. “This was a time when our forces in Afghanistan were stretched thin and our troops were deployed to isolated outposts,” Obama said.

Pitts was the last soldier standing at his post after 200 insurgents attacked his team. He was badly bleeding after a hit by shrapnel from a grenade explosion in both legs and arms.

In spite of his injuries, Pitts still managed to hurl grenades at the enemy and pull himself onto his knees to man a machine gun to defend his post single-handedly. One of his teammates said if it were not for Pitts, the post would have been overrun.

The enemy was so close, Pitts could hear their voices. The president shared that Pitts begin to make peace with the possibility that he was going to die when he whispered over the radio letting others know he was the only soldier left. “He prepared to make a last stand. Bleeding, barely conscious, Ryan threw his last grenades,” Obama recall.

Once other soldiers finally arrived, severely injured, Pitts called over the radio to air support sending coordinates that helped drive off the enemy.

The president also honored the nine men by name and their families who served alongside Pitts and died in battle. “These American patriots lived to serve us all. They died to protect each of us. And their legacy lives on in the hearts of all who love them still, especially their families. Mothers, fathers, wives, brothers and sisters, sons and daughters,” said the president.

The soldiers who later arrived to provide reinforcements were also in attendance at the ceremony. “And so today, we also pay tribute to all who served with such valor that day. Shielding their wounded buddies with their own bodies. Picking up unexploded missiles with their hands and carrying them away. Running through the gunfire to reinforce that post. Fighting through their injuries and never giving up. Helicopter pilots and MEDEVAC crews who came in under heavy fire,” Obama said as the soldiers humbly stood.

Pitts reiterated that the medal was a opportunity “to tell our story” and “a memorial for the guys who didn’t come home”.

Just moments before Obama presented Pitts with the Medal of Honor in the East Room, he once again honored him for his actions, “It is remarkable that we have young men and women serving in our military who, day in, day out, are able to perform with so much integrity, so much humility, and so much courage,” Obama said. “Ryan represents the very best of that tradition.”