You are at:Home»Featured»MY STORY – Life after the Olympics: A lesson in sports and business
Tweet 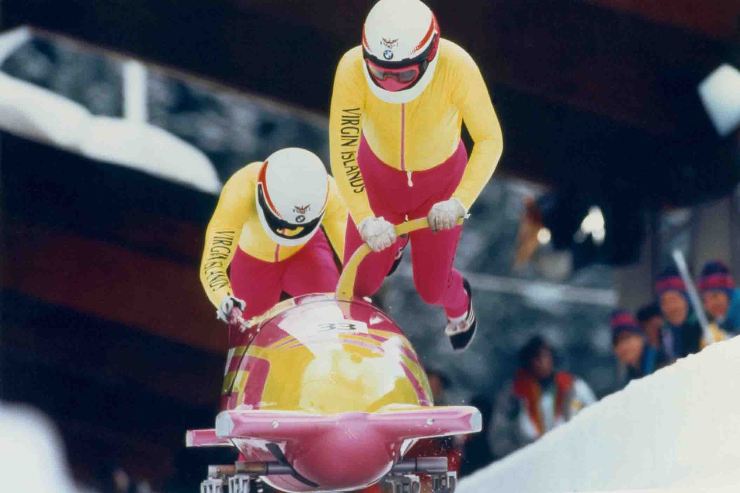 Go with your gut. If you think you can do it, go for it. Go all out. Don’t do it half, either go all in or don’t try. Just go all out and follow your dreams.
— David Entwistle, 2-time Olympian

Born in Maryland and raised in the U.S. Virgin Islands, David Entwistle has experienced much in his 49 years. While attending the University of New Orleans, Entwistle decided to leave before graduating, in order to get an opportunity to run a restaurant. This venture led to a 20-year-long career for him in the food industry, owning a food service business, grocery stores, and a wholesale foods company. Having been a successful hurdler in college — known for his athleticism — he was recruited to join the U.S. Virgin Islands bobsled team as the brakeman at the age of 24. Entwistle went on to compete in two Winter Olympic Games with the team: the 1992 Olympics in Albertville, France and in 1994 in Lillehammer, Norway.

Afterwards, he continued working in the food industry until 2003, when he sold his companies and returned to Maryland with his family. Though he continued to work in the food industry in the states, he realized that he could not work for others and found success again with his own company, Pirtek, where he works with company president, Morgan Arundel. Entwistle and Arundel talked to the DC Spotlight Newspaper about what he learned as an Olympian and how those lessons aid them today in running the Pirtek company in Rockville, Maryland. 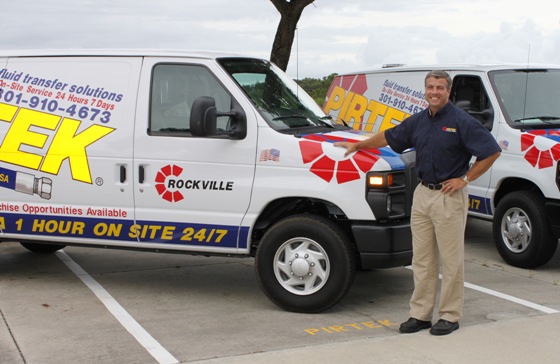 BD: Tell me about your time training with and competing with the U.S. Virgin Islands bobsled team.

David Entwistle:  Time training was fun. It was a span of about six years total. It was good. I’m competitive. It was on and off, because I did have a job at the time. In warm weather, we’d train at Lake Placid, but during the winter months, it would be at different tracks: Canada, France, Germany, anywhere the World Cups were is where we would train in Europe. Competing was when… all the training comes together. I was just a break, man. It wasn’t like I was a driver, so all I had to do was be fast and stay in shape, lift, and be fast. That’s about all a brakeman does; you don’t do much after that, just basically staying in shape for all that time.

BD.: In what year did you compete and win the Olympics and which medal did you win?

David Entwistle:  No medals. It was 92’ Olympics in Albertville, France and the 94’ in Lillehammer, Norway. No medals. Not even close. It was more just representing my country.

BD: During your rise from athlete to Olympian, what life lessons did you learn from the Olympics?

David Entwistle:   There was no pretentiousness. When everybody got together, especially at World Cup events, everybody was an equal. Remember that movie “Cool Runnings”, where everybody was laughing at them and ridiculing them? That didn’t happen at all. That was all for the movie. I think everybody always got along. Warm weather countries obviously were never expected to be great; if you don’t have snow, you’re not expected to do well in Winter Olympics. But nobody looked down on anybody about that. Everybody was looking out for each other, helping each other. Guys helped each other move their sleds, because those are heavy sleds. Then in situations where you came off the track at different venues for eating and stuff like that…in the village, everybody hung out. It wasn’t like everybody stuck to their team. So you got to know people from Germany, Russia, Austria, and all over. We also hung out with anybody that was in a sliding sport: the lugers and the bobsledders.  Everybody sort of hung out. You’d see everybody at meals and stuff like that.

BD: How have these lessons transferred over into your role as a business owner?

David Entwistle:  I’ve pretty much been competitive since I was young. Even though we weren’t expected to medal, I still went in to try and do the best I could at all times. I’ve always done that with athletics. And I guess from a business standpoint, it transferred over — to have drive, to show up. I don’t ever take sick days, even when I had my wholesale food business I never missed a day. I was competitive in the fact that I wanted to be the best in what I did, and now with this Pirtek that I’ve started, I’ve got big plans on being one of the top centers in the franchise.

BD: What made you want to become a business owner rather than try and compete in the Olympics again?

David Entwistle:   I just got older. I was 24, 25 when I started. It was time to let the younger guys go. I brought some younger guys into it and they kept going. For the Japan Olympics, I was there if they needed me to call, but I wasn’t really planning on going. It was time to go into the real business world. I had a family at that point, responsibilities.

BD: What’s the name of your company and what service do you offer?

David Entwistle:  It’s called Pirtek Rockville. We’re an onsite hose replacement company. So if somebody breaks a hydraulic hose, we show up and fix it.

BD: How old is the business.

David Entwistle:   In the U.S., it’s been about 16 years now. This franchise we’ve opened is only six months, but it’s been around for 16 years in the U.S. and longer internationally.

BD: Was it hard adjusting from rigorous training for the Olympics to being a businessman?

David Entwistle:  No, not really. Work in [some]ways is hard and so is training.

BD: You once owned a variety of food businesses, what was that experience like and what made you want to sell them?

David Entwistle:  The food business was in the Virgin Islands. I actually sold that because I was trying to come back to the United States with my kids. They were getting ready for school age, and I was going to move back to the continental U.S., so I sold them. That was in 2003. I loved the food business. It was something I got into out of college. The wholesale food was good because I was dealing with a lot of big companies at the time and trying to get them placed in grocery stores in the islands. I love the food business and transitioned from that into now, hose replacement, a more mechanical type business.

David Entwistle:  Business is business. This one I have to deal with people and I had to deal with people in the food business, so there’s a lot of a similarity there. In the food business, you’re selling a product that some people can either buy or not. If they don’t want Hellmann’s, they can buy the private label mayonnaise. If they don’t want Ocean Spray, they can buy the private label cranberry juice. People have an option, so you’re trying to sell the name brand to somebody. In this business, you’re helping somebody out of a situation. They basically will call us when they have a break down. So just like your car when you have AAA, when you blow a tire on the highway, you call them.  Well, if a hose blows on a job site or in a factory or on a cruise ship, they call us and we come and fix it. You’re getting somebody out of a bind. So it’s a little different in that aspect, but you’re still dealing with the same kind of people and you’re giving customer service to somebody.

BD: In two sentences, what advice would you give to others who would like to be an Olympian?

David Entwistle:   Go with your gut. If you think you can do it, go for it. Go all out. Don’t do it half, either go all in or don’t try. Just go all out and follow your dreams.

BD: In two sentences, what advice would you give to anyone who would like to start their own company?

David Entwistle:  Prepare to work hard. Don’t let anybody stand in your way.

BD:How has David’s drive for excellence in the Olympics helped in building the brand of his company Pirtek?

Morgan Arundel: Well here’s a guy from the Virgin Islands that takes on a challenge of riding a bobsled when the country doesn’t even have any ice in it. I mean, anybody who can take on a challenge like that can certainly handle operating a Pirtek center. And his drive and ambition obviously showed when he was on the Olympic [bobsled]team. And so when running a Pirtek center, we look for people with the same drive and ambition and he has it.

BD: What are your future plans for the company?