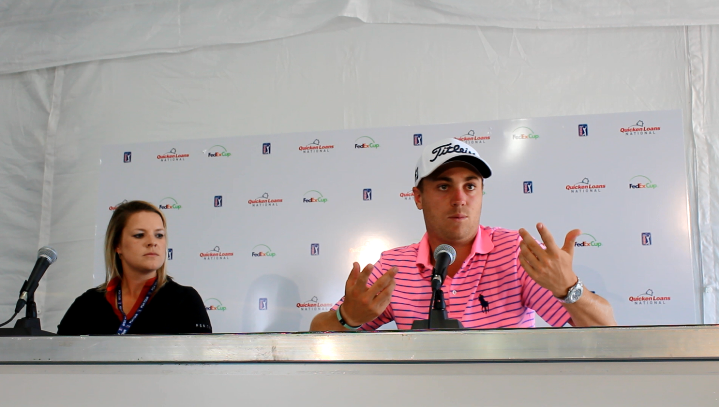 Ricky Fowler early in the week.

WASHINTON, D.C – Golfers could not escape the Washington, D.C. heat over the Fourth of July weekend. Neither could they escape the rain at the Quicken Loans National Golf Tournament. With high humidity and temperatures running up to 93 degrees, PGA tour members survived the final day of the tournament at TPC Potomac at Avendale, dealing with rain delays and ultimately, a one hole playoff to determine the winner. 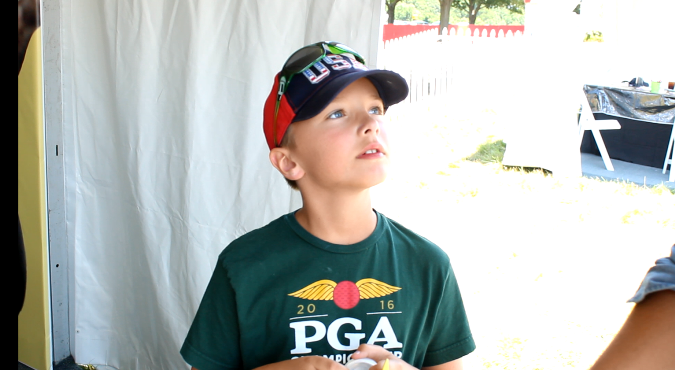 Charlie, participating in the kids activities at the TGR Learning Lab Youth Activity Zone at the tournament.

This year’s tournament carried a lot of emotional weight on the course and off. The tournament kicked off on Wednesday with the celebrity Pro-Am tournament. Ricky Fowler played with Cleveland Cavalier shooting guard J.R. Smith. On the final holes, Fowler was joined by U.S. Army veteran Bryane Greene. Greene, who had just returned from a tour of duty, caddied for Fowler on his final two holes, surprising his family, who unknowingly waited for him at the eighteenth green. 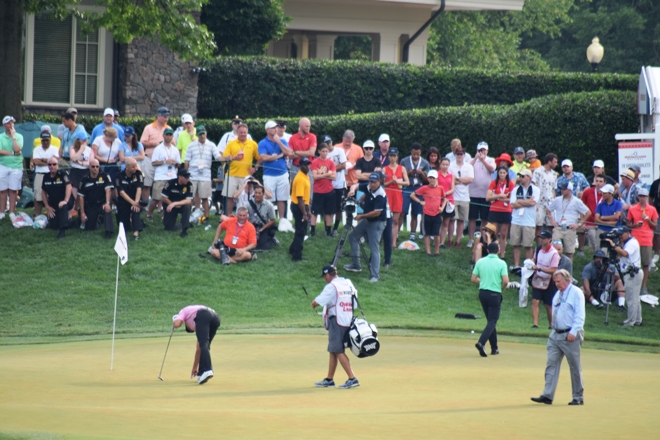 Fowler commented on the heartwarming moment at the press conference. “I think everyone’s seen a lot of homecoming videos,” he said, “and having that feeling coming down the fairway, walking to the green, sharing that moment with him and being able to share that special moment with his kids behind the green is definitely something I’ll never forget.”

Much of the tournament focused on veterans and service members of the military at the driving range, where spectators signed a military heroes wall and participated in Shot for Heroes, a chipping contest sponsored by Operation Homefront and the Tiger Woods Foundation. This event raised money for service members.

Shot for Heroes benefited two charities: Operation Homefront, which serves military members at home and abroad, as well as their families, and the Tiger Woods Foundation, which provides kids with an education.

The event took place at Avendale’s driving range. Participants had to aim for a giant “Q” bullseye with a hole in the middle. Quicken Loans donated $150 dollars to each charity for every ball hit inside the “Q.” For a hole-in-one, the sponsor paid $10,000 to each charity and the participant who took the shot. While no one hit a hole-in-one, one participant managed to dunk it into the cup. Unfortunately, the ball bounced out.

Quicken Loans donations were not only contingent on the success of the participants. The company took care of registration, donating $25 to each charity for each player who registered. This allowed Shot for Heroes to raise close to $100,00 this year. The event — in its third year — was “an incredible success.” One participant agreed saying, “The shots themselves were irrelevant. I think just by signing up, the fact that they would make that donation. That was key.”

The tournament also featured activities geared towards families this year, with the unveiling of the Kids Village. The village featured mini golf and activities such as face painting and caricature artists, as well as the TGR Learning Lab Youth Activity Zone. The Learning Lab was the main attraction of the kids zone and centered around educational activities set up by the Tiger Woods Foundation.

The six stations at the Learning Lab focused on STEM curriculum, one of the key tenants of the foundation’s education initiative. Kids could participate in these activities, which ranged from “Discovering Pi” to “Light it Up,” which taught about circuit through LED lighting, to “College Blueprint,” which used augmented reality technology to allow kids to explore college campuses.

Many of the young golfers took to the mini golf course, such as CJ, who was attending his second Quicken Loans National. Late on Sunday, he had yet to score his hole in one, but was determined to achieve it.

As the spectators took part in the off course activities, the pros were out trying to tackle what was described as one of the toughest courses on the tour this season. The final day began with David Lingmerth leading a close pack at seven under par. but following in hot pursuit were both Kyle Stanley and Charles Howell III.

Paired together for the final day of the tournament, Howell III and Stanley both managed to shoot four under par on Sunday. Lingmerth, on the other hand, shot three above par and fell out of the lead, as the other two came on strong. After an inopportune rain delay, Lingmerth and Daniel Summerhays — his partner for the day — both finished regulation play. Sitting at the top of the leaderboard in a tie were Stanley and Howell III.

After the rain delay, the drama continued when two golfers faced each other in a playoff on the eighteenth hole. Stanley played first, smacking the ball into the rough off to the right of the fairway. It was hard not to feel his dismay as his drive missed the mark. With him most recent PGA Tour event win in 2012, the last couple years have been tough on the 29-year-old Stanley. But after managing to knock one on the green, Stanley successfully putted, clinching the win with one shot to beat Charles Howell III.

During his press conference, Stanley teared up about some of the lower points he had faced over the last few years his career. “There was some doubt for a little bit,” he said when asked if he thought he would ever get back to the winner’s circle. “You certainly question if you’ll get back [and]have a moment like this. It makes this pretty special for sure.”

Stanley may have teared up during the press conference, but one couldn’t help but think of Tiger Woods, whose triumphed through career setbacks. Despite supplanting himself as one of the all time greats, Woods has had to overcome setbacks, from the death of his father to a debilitating back injury late in his career. It seems Tiger can take a page out of Kyle Stanley’s book when it comes to career setbacks. Eventually with grit and perseverance, the wins will come, even through the lows.