You are at:Home»Featured»BOOK REVIEW – The Particle at the End of the Universe: Uncovering the Higgs Boson
Tweet 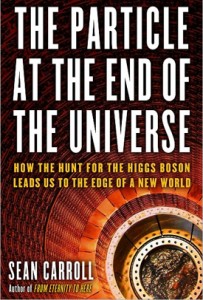 The world celebrated the discovery of the Higgs boson on July 4, 2012, but many of the general public still have uncertainties about what the Higgs boson is, what it means, and why we should care about it. Sean Carroll, a theoretical physicist at the California Institute of Technology, is here to answer those questions. He illustrates the concepts clearly, especially for those with “absolute zero” physics knowledge, in The Particle at the End of the Universe.

Washington, DC, residents in particular shouldn’t have any trouble with the bevy of acronyms that Carroll introduces. Among the most important are the Large Hadron Collider (LHC), ATLAS (A Torroidal LHC ApparatuS), CMS (Compact Muon Solenoid), and SSC (Superconducting Super Collider). The first three are all part of the experiment that discovered the Higgs and the fourth was the proposed name for the equivalent American machine that was never built. Each of these machines was an enormous and expensive endeavor (the LHC contains ATLAS and CMS) capable of producing large-mass particles. For Carroll, the ghost of the SSC lingers behind the LHC’s startling success, as a reminder that profit margins sometimes trump the scientific spirit.

Carroll brings a sheer passion for his subject that shines throughout the book. Playful chapter titles and subtitles let the reader in on the joke, such as chapter six, entitled “Wisdom Through Smashing,” and subtitled, “In which we learn how to discover new particles by colliding other particles at enormous speeds, and watching what happens.” That description, while simplistic, summarizes how the Higgs boson was found: it is a particle that emerges when other particles are smashed together. It lasts for less than a sextillionth–or a billionth trillionth–of a second, but without it other particles would have no mass and there would be no life as we know it. 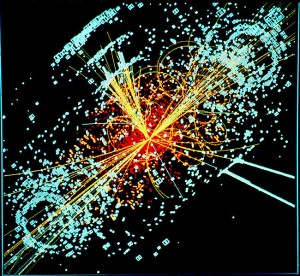 In order to understand the significance of the Higgs boson, one needs to understand the significance of the physics behind it. Carroll guides the physics neophyte through the Standard Model of particles, which, in turn, cannot be explained without a particle like the Higgs boson. One of the most confounding questions of modern physics he answers straightforwardly: “Matter is really waves, but when we look at it…we see particles.” The Higgs boson is a wave in the Higgs field, as photons (light particles) are waves in the electromagnetic field. Unlike any other field, the Higgs exists in empty space at a nonzero energy level. All matter (even, scientists theorize, dark matter) has to travel through the Higgs field, preventing every particle from traveling at an identical speed, in other words, giving it mass.

How the Higgs field gives mass to other particles can be explained by the following analogy, updated from one proposed by physicist David Miller, who lobbied for the machine that found the Higgs boson in 2012. If Angelina Jolie and Sean Carroll walk at the same speed from one end of an empty room to the other, they will both reach the end at the same time. However, if the experiment is repeated in a room full of people, Jolie will reach the end later, because she will be stopped along the way for autographs and chitchat. In this scenario, Jolie has more “mass” than Carroll. Throughout the book, Carroll combines the insights and analogies of other scientists with his own to explain both the intricacies of science and their enthusiasm for it. Among those interviewed for the book are all the key scientists involved in the experiments: Lyn Evans, Joe Incandela, Fabiola Gianotti, JoAnne Hewitt, and Sau Lan Wu.

One does not need to know anything about physics to comprehend Carroll’s defense of its pursuit. He actively avoids claiming any practical applications for particle physics (though he notes that there were no apparent applications for electricity or relativity either) and instead concentrates on the wonder factor. “Science,” he writes, “is the quest for awesome,” and that is why we should care about the Higgs boson. This is a book not for those with technical expertise, but for those interested in the awesome. Carroll invites anyone who wants to understand the mysteries of the universe–at least, as far as he does. And what we do not know? That’s what makes it fun.

Renowned theoretical astrophysicist Lawrence Krauss will be giving a lecture on the discovery and implications of the Higgs boson particle at the Baird Auditorium of the National Museum of Natural History on January 14. For more information, click here.