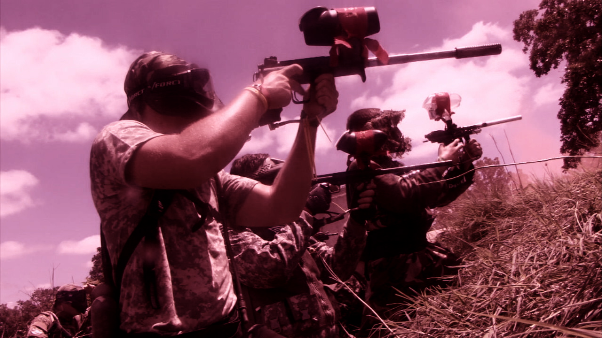 The year that local Washington, D.C. directors and producers, Doug Gritzmacher and Mike DeChant, Jr. discovered “Oklahoma D-Day,” an annual event in Wyandotte, Oklahoma, would become a creative milestone in their film careers.  As fans of the sport paintball, they were immediately interested in the premise of the day, which involved the re-staging of the storming of Omaha Beach in Normandy, France by Allied forces during WWII.   Having heard about the event from a friend, Gritzmacher and DeChant, Jr. decided to visit the location.  They discovered that the safe, but challenging, game of paintball was intricately used to portray the crucial scenes in the war.  This event was a labor of love of sorts and a dedication to organizer Dewayne Convirs’ grandfather, who actually served in the war on D-Day.  Convirs’ grandfather proudly attended the event until his death.

While this pivotal event during the war has never lost its significance in the minds of most Americans, Gritzmacher and DeChant, Jr. wanted to reintroduce the events for the benefit of younger generations in memory of the soldiers through their own documentary.  Their trip had been a success and was ultimately the beginning brainstorms for their documentary “Soldiers of Paint.”

What were your aspirations as a child?
Mike DeChant, Jr.:  Well, for a while I think I seriously wanted to be an NFL wide receiver, but that was at about 5 years old.  I hadn’t yet realized that the pros don’t actually play with Nerf footballs.  Then somewhere along the way it shifted to becoming an artist. First, I wanted to be a painter and illustrator, because I really enjoyed painting and drawing. Then my father introduced me to the still camera, and I never put it down. From that point on, I wanted to become a professional photographer.

Where did you grow up?
Mike DeChant, Jr.:  I grew up in Montgomery County, Maryland. 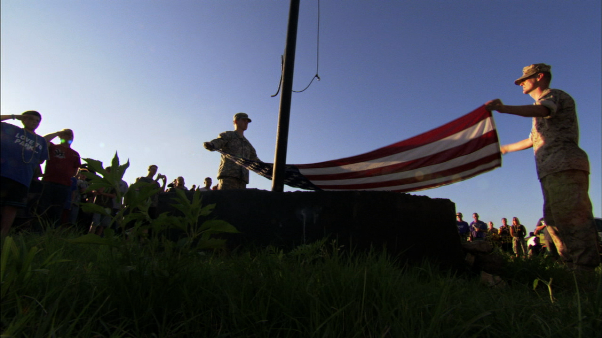 Where did you go to college?  How did you get your start in the film and video industry?
Mike DeChant, Jr.:  I remember messing around with the ancient A/V equipment at my elementary school with friends.  We made short, goofy, mock TV shows for fun, but I seriously doubt they were any good (I’d love to see those videos again). I took my first real video production class at the Montgomery County Community Cable Access facility, making a music video for a local musician.  I went on to study graphic design and still photography at Loyola University in Maryland. There wasn’t a film program at Loyola.  Though I took a fascinating Philosophy in Film class there, that ultimately inspired me to want to become a filmmaker. After spending a couple years in the real world working as a photographer’s assistant and then as a graphic designer, I decided to pursue my dream of becoming a filmmaker and enrolled at American University as a graduate student in the Masters of Fine Arts in Film in Electronic Media. 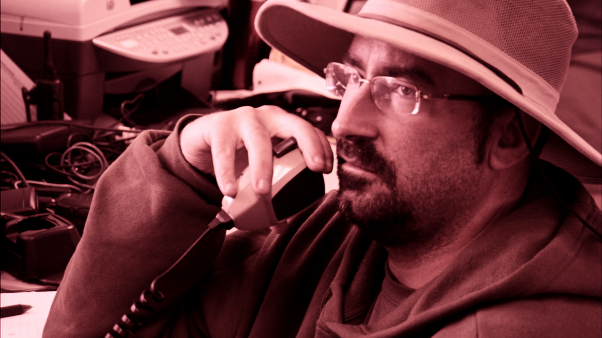 “Bone Mixers.”  “Bone Mixers” is the story about a group of D.C. area people who gather weekly at a suburban home in Silver Spring, Maryland to play the game dominoes. The diverse group featured members from all over the world, including Jamaica, Venezuela, Cuba, the Czech Republic, Guyana, St. Lucia, and the United States. These men and women were extremely passionate about their game and the competition level was high. But ultimately, they gathered religiously every week, because they were part of a community — a community that shared culture, laughter, and friendship.  All of this was possible because of their combined love of the game, dominoes.

How did we come up with the idea of 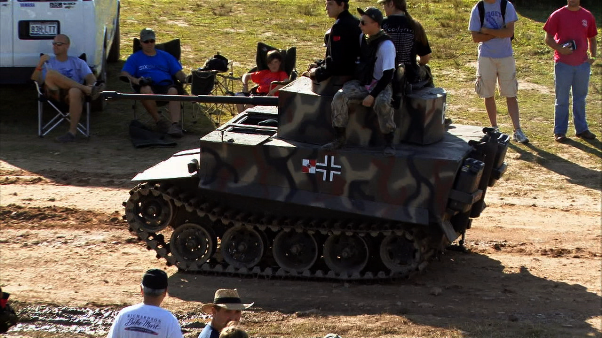 “Soldiers of Paint”?
Mike DeChant, Jr.:  After we completed our Master’s Degrees at AU, Doug and I spent a good bit of time working as independent freelancers in the DC film and video industry. We always felt like we wanted to work together again and make a feature-length documentary, but we just needed to find the right idea.  It took a while, but the idea came back in 2007.  I happened to be playing paintball at a friend’s bachelor party in Maryland. I’m not a big paintball player and didn’t know much about the sport other than finding it fun… At the field that day, I was talking to a teenage referee who worked there. He asked me if I was going to go to “D-Day”, and I had no idea what he was talking about. When he told me it was 5,000 paintball players re-staging the battle of Normandy in Oklahoma, I was 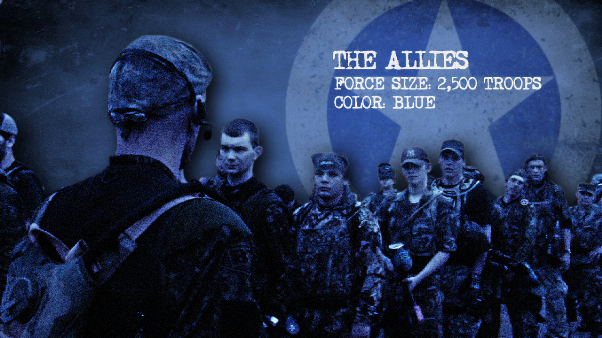 instantly intrigued.  I had a look at the website and was completely blown away by what I saw: the scope, the intensity, and the tanks.  The fact that we hadn’t heard of this event before and that someone hadn’t made a movie about it yet convinced us that we finally had our idea. The next step was to head out to Oklahoma to see it for ourselves.

Where was the setting of the event?
Mike DeChant, Jr.:  Oklahoma D-Day is located in rural North Eastern Oklahoma in a town called Wyandotte.

Who organized the event and who originated the idea?
Mike DeChant, Jr.:  Oklahoma D-Day founder and promoter, Dewayne Convirs, originated the event in 1997. He staged the first Oklahoma D-Day to honor his grandfather who served on the actual D-Day (one of the first allied troops to land on Omaha Beach in Normandy, France. He was a combat engineer, clearing landmines and barricades for the next wave of the beach invasion. He made it all the way to Germany and survived the war. He was present at the first event in 1997; approximately 150 paintball players took part. (They were divided into “Allied forces” and “Germans”.)  A group of “Allied forces” transformed a small boat into a landing craft and crossed the family pond to invade a group of “Germans” entrenched on the hillside across the pond. I’m not sure who won that battle, but Dewayne’s grandfather was so enthused that Dewayne promised to make it an annual event. Unfortunately, his grandfather passed away before the next year’s event – which was about 300 players. The event has continued every year since then, growing as large as 5,000 players from all over the US and the globe. 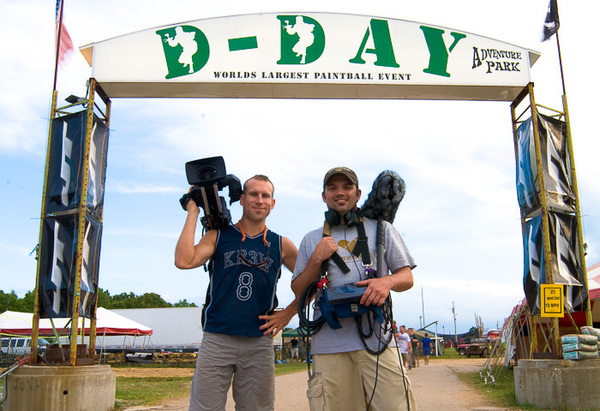 What was interesting to you and Doug about the people who participate in the event?
Mike DeChant, Jr.:  Like many when they first hear about this event, certain preconceived notions popped into our minds when we first heard of Oklahoma D-Day. This could be a bunch of wacko, militant, yahoos, we thought. But when we first got to Oklahoma and started walking around the campgrounds to introduce ourselves, we were really impressed by the community that makes up this event…In fact, many of the players are veterans and some are even active duty service members…We felt that there was a very positive story coming out of Oklahoma D-Day, and we wanted to make that a core theme of the movie (in addition to some great battle sequences).

How did you try to emphasize that this re-enactment of D-Day is really a tribute to all veterans?
Mike DeChant, Jr.:  By telling Dewayne’s story in the movie –- focusing on why he struggles to put the event on every year as a tribute to his grandfather –- we knew we would convey this message.  In the scene where we tell Dewayne’s grandfather’s story, we captured an emotional interview with Dewayne as he recounts his memories of his grandfather. We were also able to track down some archival black and white footage from the actual D-Day. The intention was to juxtapose this fun, epic, paintball war with the harsh images of real war to root in the audiences’ mind that this event is about more than just a paintball game.

How does this event give a new perspective to the real D-Day that many people remember, or have learned about?
Mike DeChant, Jr.:  In the making of the movie, both Doug and [I] captured footage as “battle embedded” cameramen. The feeling of being in the battle was intense: paintballs flying everywhere smoke grenades, yelling and screaming… the veterans who are also players at Oklahoma D-Day tell us that there are some distinct similarities even though the armies are using paint instead of bullets – fog of war being chief among them.   The big thing for us was witnessing the randomness of when people would get hit…A lot of players get hit before they’ve taken two steps on the “beach”. Knowing that is what the soldiers landing on Normandy in 1944 faced – with bullets – really puts things in perspective. The fact that they continued to push forward even after taking massive casualties to take those heavily fortified beaches is truly amazing when you think about it. History easily could’ve gone another way if it wasn’t for the unrelenting push of those heroic troops on that fateful day in June seventy years ago.

This documentary gets rave reviews for portraying a real action film. Were you surprised by how far the players were willing to go to make it seem like an actual battlefield?
Mike DeChant, Jr.:  Thanks!  When we first saw Oklahoma D-Day battle with our own eyes we were astonished by the scope of it all – 5,000 players fighting for 800 acres of land – using tanks, bazookas, and sophisticated war strategies.  We knew right then and there that it was tremendous material for a documentary film…We wanted that Saving Private Ryan type of feeling, the jaw-dropping combat action…This made for a compelling “who’s going to win?” story line that I won’t spoil here…

Where can you purchase or view the documentary?
Mike DeChant, Jr.:  Visit www.soldiersofpaint.com to order the DVD or find the multiple ways you can buy or rent the movie in digital form.  Note that the DVD features 25 minutes of bonus footage and a director’s commentary track.