The president of the United States has a range of responsibilities that extends far beyond the strictly political. This week, President Obama hosted the Kennedy Center Honors, and then spoke at Nelson Mandela’s memorial in South Africa. Truly two different types of events, but both indicative of the vast work our president does across the globe.

On Saturday, President Obama traveled to the Willard hotel for the 10th annual Saban Forum on U.S.-Israel relations. He focused on Iran and its changes in leadership. “We do have to test the possibility of resolving all these issues diplomatically,” he said of the nuclear conflicts with Iran. In regards to the political issues in Iran, Obama stated that the Iranian people and government “are going to have to have a path in which they feel that there is a dignified resolution to this issue. That’s a political requirement of theirs, and that, I suspect, runs across the political spectrum. And so for us to present a door that serves our goals and our purposes but also gives them the opportunity to, in a dignified fashion, re-enter the 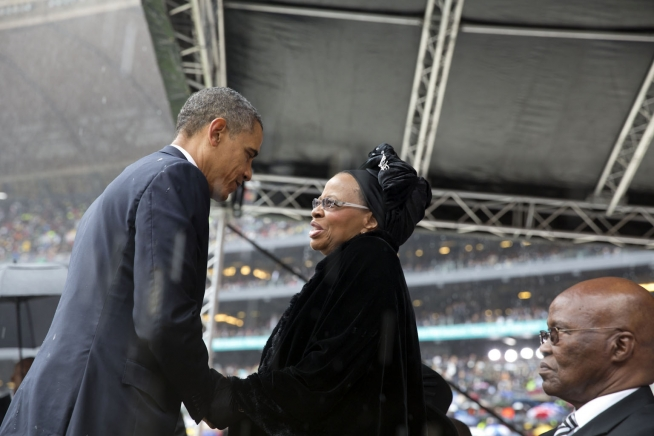 international community and change the approach that they’ve taken.”

On Sunday, President Obama and the First Lady hosted the annual Kennedy Center Honors, where Martina Arroyo, Herbie Hancock, Billy Joel, Shirley MacLaine and Carlos Santana were awarded medals. The celebration of achievers in the performing arts always brings forth some of the biggest names in the industry, but Obama pointed out that all of this year’s honorees can be also congratulated for their ability to preserve their true character. “President Kennedy once said of such creative genius that, ‘The highest duty of the writer, the composer, the artist is to remain true to himself and to let the chips fall where they may.’ Now, that’s easy to say when — as they do for these artists — the chips usually fall in your favor, whether at Woodstock or the Oscars or elite venues all over the world,” Obama said. “But the fact is that the diverse group of extraordinary individuals we honor today haven’t just proven themselves to be the best of the best. Despite all their success, all their fame, they’ve remained true to themselves — and inspired the rest of us to do the same.”

Monday was a long day of travel for the president, as he headed to South Africa for Nelson Mandela’s memorial. First Lady Michelle Obama, Hillary Clinton, and former president George Bush and his family accompanied Obama to the service where 80,000 people were expected to attend. The group arrived in the early hours of Tuesday morning, and then sloshed through the midday rain to the stadium where the memorial was held. Despite the weather, audience members were waving flags and cheering in celebration of the late South African leader and statesman. “It is hard to eulogize any man — to capture in words not just the facts and the dates that make a life, but the essential truth of a person — their private joys and sorrows; the quiet moments and unique qualities that illuminate someone’s soul,” Obama said in his speech. “How much harder to do so for a giant of history, who moved a nation toward justice, and in the process moved billions around the world…After this great liberator is laid to rest, and when we have returned to our cities and villages and rejoined our daily routines, let us search for his strength. Let us search for his largeness of spirit somewhere inside of ourselves. And when the night grows dark, when injustice weighs heavy on our hearts, when our best-laid plans seem beyond our reach, let us think of Madiba and the words that brought him comfort within the four walls of his cell: ‘It matters not how strait the gate, how charged with punishments the scroll, I am the master of my fate; I am the captain of my soul.’”

On Friday, President Obama hosted a meeting with a large group of mayors from across the country. Obama discussed how his administration can work with mayors in order to boost job creation and ensure success for the middle class. “My hope and goal out of this meeting is [that]we immediately set up a strong partnership with all of the mayors that are here and all of the mayors that are not here, where we get a clear sense of what their vision is of how they are trying to deliver services. How we can make sure our kids are getting the very best education possible. How we make sure that we are creating the platforms and the infrastructure for jobs to be created and business to succeed in these cities. How we make sure our transportation dollars are flowing in a way that maximizes economic development and hopefully reduces congestion and rush hour traffic. I’m sure that’s something some of you have heard from your constituencies, about how do we make sure there’s a strong social safety net there that is not a place where people stay over the long term, but rather is a mechanism by which people who have had some bad luck can get back on their feet and get back into the workforce,” Obama said.

For the president, that ended a week which had culminated in a historic memorial to celebrate a great leader and humanitarian. It was certainly an important week in the life of our president, as well as in the life of over 100 other world leaders who attended the celebration of Mandela’s life. It was an honor for a man who gave new meaning to the words “world leader,” because he unequivocally changed our world.