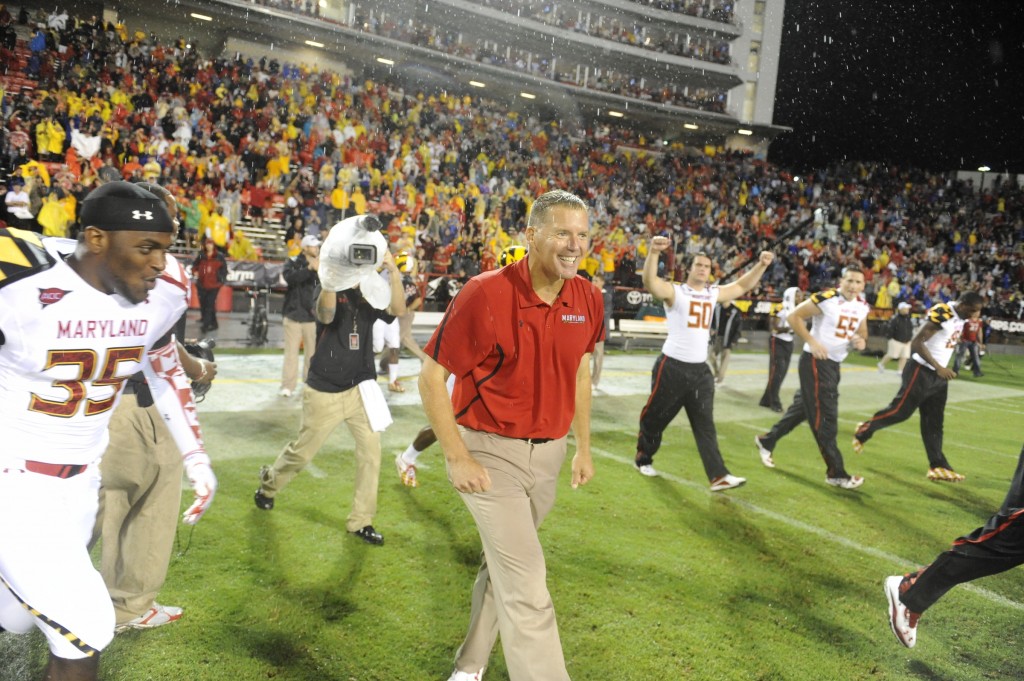 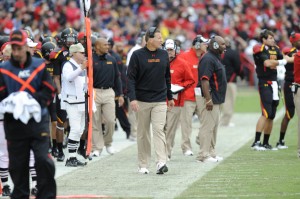 Maryland football has a new sheriff in town.  In January, the University of Maryland and its football team (9-4 last season) hired Randy Edsall, the former head coach of the University of Connecticut and the mastermind behind a resurgent Huskies team that won the Big East in 2010. Edsall grew up roughly 70 miles from College Park, Maryland and welcomes the opportunity to coach the hometown college team he rooted for in younger years.

He replaces Coach Ralph Friedgen, who led the Terps for the past 10 seasons, 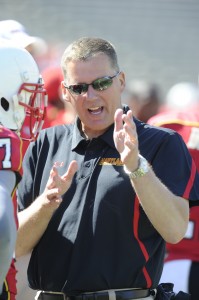 and he recognizes the enormity of this position. “I said [Maryland] is a place, if I ever had the opportunity, that I would like to coach, and God gave me the chance back home and fortunately the opportunity presented itself,” Edsall said. “I was lucky enough to land here and I’ve enjoyed every moment that I’ve been here.”

The Maryland community has hailed the coach’s arrival with great fanfare, which hasn’t gone unnoticed by Edsall.  “[Washington, D.C.] is a very vibrant area with a lot of things to do and a lot of places to see,” he said.  “I’ve been well-received and welcomed, and I appreciate that very much.”

Edsall has a 74-70 career record and brings a stout resume with him. The Huskies entered the Big East in 2004 and since then, Edsall has won two Big East titles and appeared in five bowl games, including last year’s invitation to the Fiesta Bowl, a bowl championship game where UConn fell to the Oklahoma Sooners 42-20.

Edsall recalled his strategy at UConn and concluded, “My whole philosophy, my whole belief and really what I did at Connecticut is, I wanted to make sure that we would build a program, that we would do it the right way and that we would develop the young men holistically in every aspect of their life.”

He intends to incorporate an offense that stretches the field both vertically and horizontally. The beginnings of that new offense was on display in the first game of the season, a primetime Labor Day matchup against the ACC rival Miami Hurricanes.  Incidentally, during that game, the Terps topped the Hurricanes 32-24.

“We want to stay balanced in what we do—run and pass,” Edsall said. “I think the fans love the up-tempo, no huddle offense.”

Fans were also given a first look at the team’s pride uniforms — unorthodox jerseys featuring the pattern of the Maryland flag on the helmets and sleeves.  The new attire debuted with both positive and negative reviews.

“I knew the uniforms would create some topic of conversation all around the country, but I didn’t think it would be that much,” Edsall admitted. “In terms of Maryland, we wanted to bring out the state pride…I knew people would say, ‘Wow, what’s that?’ Standing in the tunnel and running out onto the field and seeing the full stadium, I felt good for our kids.”

The arrival of Edsall marks the beginning of another era of Maryland football. This chapter features a new look and an invigorated offense competing in a larger more competitive conference.  Big East teams Pittsburgh and Syracuse became the latest teams to make the jump to another conference, as they both left the Big East for the ACC. Connecticut, Edsall’s former team, is also rumored to be transferring to the ACC, creating compelling storylines for years to come.

“I think it’s good that the ACC was proactive,” Edsall said. “I think those were two good additions.”

With so much anticipation, only one thing remains for the Terps to do: win. According to Edsall, that’s exactly what they plan to do.

“I just want to be known as a guy who came here and worked extremely hard. If we do that, we will win championships,” Edsall said. “It’s not about Randy Edsall, it’s about what I can do for these young men that I’m coaching and developing them as people and as students and as athletes.”