You are at:Home»Sports»Sports Leader Board»SPORTS LEADER BOARD – Tiger pounces, positions himself for a comeback
Tweet

In his latest ad for Nike, Tiger Woods intones, “Winning takes care of everything.” The only problem with this statement is that Wood 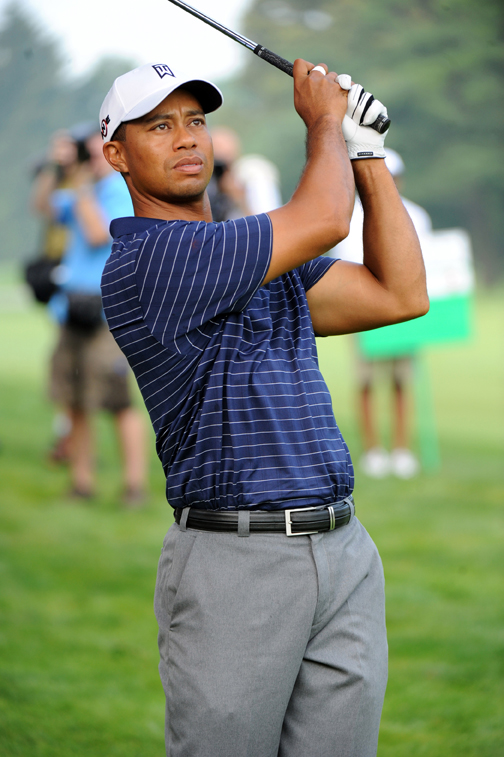 s hasn’t done nearly as much winning as he’s needed to over the last few years. Although he regained the world’s number one ranking for the first time in over two years with a win at the Arnold Palmer Invitational back in March, it’s been five years since Woods has lifted a trophy at a major.

To add insult to injury, Woods missed his best chance at adding a 15th major championship victory with the debacle at this year’s Masters, as he watched Adam Scott win the tournament with Stevie Williams, his former caddie.

“If I would have shot my number, it might have been a different story,” Woods responded when questioned after the tournament.
He finished tied for fourth at the event at five-under-par, but his infamous illegal drop earned him a two-stroke penalty that effectively ended his shot at contention. “I certainly had a chance. If I would have posted a number today, I was right there,” Woods said after the tournament. “I was four back starting out the day and I thought I really played well this week. I made my share of putts as well.”

He was tied for the lead when he was penalized on Saturday, but still entered the final round four strokes off the leader, before his putting betrayed him. Although he birdied the ninth, 10th, 12th, and 13th holes, he missed a chance for an eagle on the 15th, and then missed his birdie attempt on the 16th to truly end his chances. He also missed three putts on Saturday inside of five feet, showing that his old weakness is still very much an issue for the golfer.

Despite his continued frustrations on the green, Woods has been trying to address his putting problems. In an unexpected move for the often egotistic star, Woods went so far as to ask veteran pro Steve Stricker for his advice on how to improve his short game.

“Whatever (Stricker) says, I’m going to do,” Woods admitted. “He’s one of the best putters that’s ever lived.”

He sought Stricker out at the Cadillac Championship at Doral Golf Resort and Spa in Florida, and Stricker’s tips seem to have had an immediate effect, propelling Woods to a win at the tournament. “He was talking a little yesterday that a couple of putts were bothering him,” Stricker said back in March. “I always hate to interject anything with him, but he was open to it. You don’t want to screw a guy up, either.”

Although the Masters was a missed opportunity, the win at Doral and the Arnold Palmer victory were part of a resurgence for Woods. Not only has he won six of his last 21 PGA tour starts, but he’s also started dating Olympic ski champion Lindsey Vonn.
“Something nice that’s happened off the course was meeting Lindsey Vonn,” Woods posted on Facebook. “Lindsey and I have been friends for some time, but over the last few months we have become very close and are now dating.”

After his disastrous cheating scandal and subsequent split with ex-wife Elin Nordgren, this was some of the first positive news that’s come out about the golfer’s personal life in a long time. “Our relationship evolved from a friendship into something more over these past few months and it has made me very happy,” Vonn shared on her Facebook page.

While things may be on the upswing for the beleaguered star, the Masters loss still leaves Woods with an uphill battle to match Jack Nicklaus’ 18 major wins. The golfer recently committed to playing in The Players Championship at TPC Sawgrass on May 9, an event he finished 40th at last year, as he tries to warm up for the next major on the tour schedule, the U.S. Open in June. It will undoubtedly be yet another test of his mettle in a career that has been full of them in the last few years.

“He’s faced things he’s never had to face before,” pro golfer Rocco Mediate said of Woods. “He’ll be a little more human to everybody else, which is good. As a golfer, he’s not more human.”