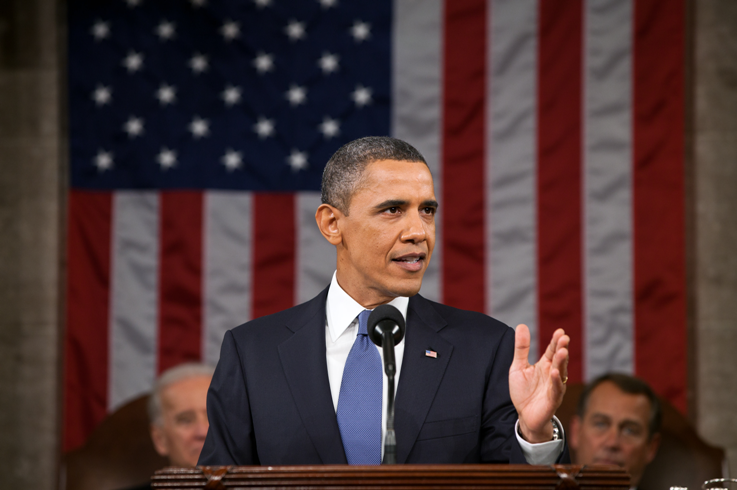 As I walked into the Senate chambers last night where President Barack Obama would give his second to last State of the Union address, I didn’t sense that much had changed since the last address a year ago.  I was wrong.  Unlike previous years, I missed last year’s address due to frigid weather.  I watched the event from home and didn’t get the feeling of excitement that I usually get from presidents in the past.  But this year, despite a personal illness and the cold temperatures, I was determined to be at this address to see the president’s remarks in person…and he did not disappoint.

As I looked out over the crowd of senators and representatives sitting on the floor of Congress, I noticed the anxious anticipation of the Democrats, as if they knew something big was about to happen.  After everyone, including Obama’s cabinet and the justices on the Supreme Court filed in, the president walked in to great fanfare, as prior presidents have done for years.

He stepped onto the stage and began with eight powerful words.  “We are fifteen years into this new century.” This statement set the tone for the speech like Lincoln’s opening words in the Gettysburg Address.  He continued, “Fifteen years that dawned with terror touching our shores; that unfolded with a new generation fighting two long and costly wars; that saw a vicious recession spread across our nation and the world.  It has been, and still is, a hard time for many.  But tonight, we turn the page.”

This was reminiscent of Lincoln’s Gettysburg Address, which began, “Fourscore and seven years ago our fathers brought forth on this continent a new nation, conceived in liberty and dedicated to the proposition that all men are created equal.” Obama must have taken his cue from Lincoln, because his speech began with power and ended powerfully.  They were words to be reckoned with.

After the opening, Obama quickly kicked it into high gear and explained how his policies during the past 7 years have helped America and Americans “turn the page.”  The list of his successes was a mighty one and the boisterous crescendo was the sound of two resounding words:  robust economy.  Those words were undeniable for Republicans.  But the president’s top 10 list itself was even more impressive, by Republicans’ standards and Democrats’.

Obama then let us in on his “Top 10 To do” list, a list that is enviable, yet doable.

Obama could have walked off the stage following this procession of successes, but he was not finished.  Apparently he ascribes to the adage “Leave the best for last.”  His last remarks were reserved for voting, race relations and venomous confrontations in Congress.

He insisted that the right to vote for all must be preserved, no matter what.  “We may go at it in campaign season, but surely we can agree that the right to vote is sacred; that it’s being denied to too many; and that on this 50th anniversary of the great march from Selma to Montgomery and the passage of the Voting Rights Act, we can come together, Democrats and Republicans, to make voting easier for every single American.”

He admitted that some Americans disagree about “events of Ferguson and New York…but surely we can understand a father who fears his son can’t walk home without being harassed.”

For any American who has an interest in U.S. progression, undoubtedly, they realized that the state of affairs in Congress, the bitter fighting and gotcha tactics, have sank to a new low, even for Congress.  They have record low approval ratings and have earned the nickname of the “do nothing Congress.”

The president, in a reflective moment of conciliation began, “I’ve served in Congress with many of you.  I know many of you well.  There are a lot of good people here, on both sides of the aisle.  And many of you have told me that this isn’t what you signed up for – arguing past each other on cable shows, the constant fundraising, always looking over your shoulder at how the base will react to every decision.  A better politics is one where we appeal to each other’s basic decency, instead of our basest fears…without demonizing each other…If we’re going to have arguments, let’s have arguments – but let’s make them debates worthy of this body and worthy of this country.”

It was a speech of historic proportion and that of a true statesman.  It was impressive, if only for his first five accomplishments.  But the speech kept on giving and giving until our plates were overflowing with good news and American’s collectively cried, “Uncle.” Obama was most definitely a winner in the personal battle that began between himself and Republicans.  But on Tuesday night, the winner was obvious.  Despite fierce partisan efforts on the part of Republicans to malign the president’s policies, partner and even parenting lately, the gavel has sounded and a winner has been chosen.  The victory speech was brief.

“I have no more campaigns to run,” he said, almost tongue in cheek during his ceremonial victory speech.  The Republicans in the audience roared with laughter and applause.  Then Obama quickly shot back with a response that would resound through the halls of Congress:  “I know because I won both of them.” Checkmate.