You are at:Home»In the Spotlight w/ Wendy Thompson»(VIDEO) Iyanla Vanzant: (2011 Republish) A Rising Phoenix Coming Back after Death – Part 1
Tweet


…That day I realized, you’ve got to think about this differently…Your daughter dying ain’t about you.  It’s about her and God.  Your husband leaving ain’t about you.  He changed his mind.  Okay, so [what].  What is about you Iyanla?  What is about you?  And what I know is the gifts and work and the blessings that God has given me to do that I’ve done for the past 32 years…Okay, get your butt up and go do something. 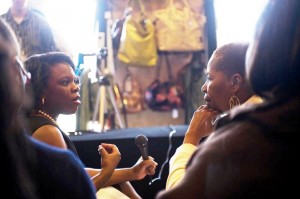 As Sharon Bullock moved through the aisles of her chic, upscale Silver Spring boutique, Metamorphosis, she glances over at the door in anticipation of her guest.  Bullock is also the local stylist for motivational speaker, advice guru, best-selling author and former talk show host Iyanla Vanzant. She awaits Vanzant’s arrival along with the other 150 people on the guest list. Vanzant is the special guest at the private luncheon and book signing to promote her latest book “Peace from Broken Pieces”. 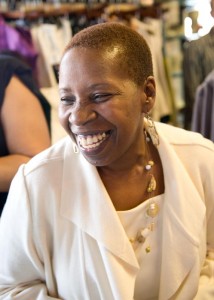 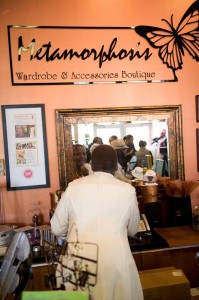 “I just spoke with Iyanla,” says Bullock, addressing the crowd, “and she is enroute.” The crowd of women smiles in unison.  Moments later, Vanzant appears seemingly out of nowhere – as she has done recently in her return to the public stage.  She sashays into the boutique and into the embrace of a sea of women eager to hear her stories and tell theirs.  “I need to put on my lipstick,” she says to the enthusiastic crowd.  “Now where is my lipstick?”

She dashes over to the mirror, then quickly returns.  “Now I’m ready,” she says and flashes her signature broad smile.

Vanzant is in her element and in her own neighborhood, but this popularity with American women far exceeds the suburbs of Maryland.  Last month, talk show queen Oprah Winfrey devoted two back-to-back shows to an extensive interview with Vanzant.  Each riveting show left viewers on the edge of their seats in anticipation of how both women would reconcile a friendship that had ended abruptly. 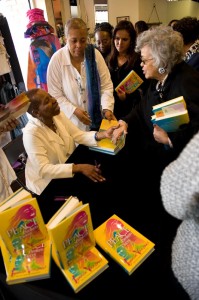 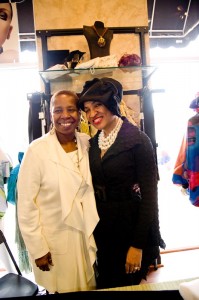 In years past, Vanzant had been a regular on “The Oprah Winfrey Show”, appearing on Tuesday of each week to speak to the millions of viewers who watched the show.  During last month’s interview, Winfrey repeatedly reminded Vanzant that “I gave you the stage,” – that she would literally turn her show over to Vanzant each week.  Winfrey would leave the stage and sit in the audience to watch Vanzant advise her audience.  Winfrey and her producers were in the beginning stages of creating a separate show for Vanzant, but suggested that she was not quite ready and needed more grooming.  Vanzant was on the stardom track initiated by Winfrey along with other regulars such as Dr. Mehmet Oz and Dr. Phil McGraw, who went on to great success.  When the budding star confided that someone “big” had approached her to give her a show of her own, the Winfrey camp accepted Vanzant’s confession as an indication that she would take the alternate hosting offer.  Then the “big” entity was later revealed to be Barbara Walters.

Her new book details the past 11 years of enormous success and tremendous loss, including securing her own talk show, “The Iyanla Vanzant Show”, with Walters.  But in those recollections, which are similar to the book of Job, Vanzant laments many of the choices she made, particularly, accepting the talk show deal with Walters.  Her book chronicles her incredible losses:  the end of her long marriage, the premature death of her daughter, the death of two siblings, the foreclosure of her home, the loss of millions of dollars resulting in bankruptcy and the loss of her coveted talk show.

When questioned about the losses, Vanzant has quick and definite responses.  Regarding the loss of her home she says, “That’s totally insignificant.  In my father’s house, there are many mansions.  Do you know how many real estate agents want me to buy a house right now?  A house ain’t nothing…”

Of her divorce, she says, “Oh well, a man [is]like a bus; wait long enough and another one will come along.”

Her pride in having learned many valuable lessons from loss is immense.  “I learned that you can never outlive the core level of your self value and worth.  And that at that level of your core value and worth, there are patterns and pathologies of thinking and believing that are going to attract to you exactly what you need to live through and learn. That’s what I’ve learned,” she says with conviction.  “I’ve learned that you can give yourself and life and the world all the lip service that you want, but when your back is against the wall, that’s when you’re going to find out who you are.  And that every now and then, God will push our backs to the wall just so that we can have a rude awakening, cause we really think we’re cute until life happens…My cuteness didn’t help me when they told me my daughter had colon cancer.  My degrees didn’t help me.  The money didn’t help me.  My cuteness didn’t help me.  None of it helped me.  What helped me was my prayer life.  What helped me was understanding no matter what happened to her [or]to me, no matter what they said, that I was going to be okay.”

Vanzant remembers vividly the day she received inklings that her young daughter Gemmia might not survive cancer.  “…This is Dr. Carol Mussenden.  She was the first one, and she said to me, ‘We’ve got a hard way to go here, a long way to go.’  And I said to her, ‘I just want someone to tell me that my child is not going to die.’ And she said to me, ‘With God all things are possible,’ and I said, ‘I’ll hang onto that.’  That was the first day, September 11, 2002,” she says as she recalls the life-changing moment.

She stressed that even in the midst of surmounting difficulties, it was important to put things into proper perspective.  In her situation, losing millions of dollars was indeed devastating, but in the current recession, many average Americans are losing his or her job, which is equally as devastating.  “I would also say, for me, it was a million dollar contract and a 40-year relationship, but for somebody else, it was a job at the post office and…the loss of a savings account.  It’s all relative to where you are.  It didn’t hurt me more because I lost a million dollar contract than it hurt the guy who lost a job at the postal plant,” she says with passion.  “We think we’re separate and I’m better and you’re better and you’ve got more…no.  No.  And that’s what I hope this experience teaches everybody.  Life happens!  It happens and when it happens, God knows who you are.  God knows where you are and God knows what you’ve done.”

She wishes she had been more introspective during the time she was experiencing the hardships, but she admits that she was not.  “I wish I had been that spiritually profound, and I wasn’t.  I was whining like a fool.  Yeah, I don’t wanna,” she says, mimicking a whining child. “You know, because I’m human.  I’m like okay, give me a break here.  Alright, what’s the deal?  So I don’t know.  What I do know is there was a day, probably about four months after Gemmia died and the pain was just unbearable.  It’s just mind-boggling. This is before the divorce, before the house, before any of that.  I lost my brother in March of 2000.  I lost my sister in June of …2001, and then Gemmia was diagnosed in September 2002. You know, I’m the baby.  I’m the last one standing.  It was about four months after Gemmia died and…it was just too painful.  It’s the kind of pain that makes you drool.  You know, you just feel stupid, like just leave me alone.  I don’t want to live.  And I didn’t want to live.  And so many many years earlier, I had bought this lovely little pink pearl-handled pistol.  I told myself I was going to protect myself – from what, I don’t know.  I don’t even know where the bullets are…”

Vanzant decided that the pain was too severe, so she made plans to take her own life.  “Because of Gemmia’s illness she had lots of drugs, so I had all of her drugs,” she says explaining her thinking process during those trying days.  “So I said, ‘Okay, I’m going to take these drugs.  No, I’m going to shoot myself.  Okay, no, I’m going to take the drugs.’  I said, ‘Okay, now if I take the drugs my grandson is going to come home from school and find me dead, and he’ll be scarred for the rest of his life.’  And I said, ‘If I shoot myself, it’s going to be all over the wall and somebody is going to have to clean that up.’  And I’m just sitting there going through this conversation, because I didn’t want to die.  I wanted to stop hurting.  So I’m sitting there and I say, ‘Okay God, please, please, please help me.  Help me Jesus.  Somebody.  Anybody.  Anybody out there.’  And then I heard as clear as day, ‘Stop being dramatic.  Stop it!’ …That day I realized, you’ve got to think about this differently…Your daughter dying ain’t about you.  It’s about her and God.  Your husband leaving ain’t about you.  He changed his mind.  Okay, so [what].  What is about you Iyanla?  What is about you?  And what I know is the gifts and work and the blessings that God has given me to do that I’ve done for the past 32 years, come hell or high water, rain or snow, all over the country, all over the world, everywhere.  That’s about me.  Okay, get your butt up and go do something.”

Today, Vanzant credits her clarity about her purpose in women’s lives for the joy she has now and is also hoping to find a great companion to share the share the joy and her time with as she gets older.  “I’m getting older, and I don’t want to be flying around all [the time].” she confides.  “I’m trying to find a boyfriend, but I ain’t ever home.”  When asked if she wants to remarry, she replies vehemently, “I said a boyfriend.”

Her career as a talk show host is not completely dead in the water; however, she is leaving those possibilities in God’s hands.  She says she would not mind having a show on Oprah Winfrey’s OWN Network or one of the big three networks:  NBC, CBS or ABC.

In the meantime, Vanzant is busy teaching and advising, as well as providing spiritual guidance at her Inner Visions Institute in Silver Spring.  After the event a Metamorphosis Boutique, she scurried off to finish teaching a local class and then hit the beltway on her way to New York to give a speech at City University of New York.

As her light begins to shine brightly once again, she does not mince words when describing what is most important to her today:  her 16-year-old granddaughter.  She beams as she speaks her name: “Niamoja.”  After her daughter Gemmia died, Vanzant became the parent of her granddaughter Niamoja.  She stops and thinks for a moment and then remarks with the clarity of an ancient sage, “It’s amazing to parent when you’re awake.”  For Vanzant, being awake means the nightmare is over, and with so many women eager to hear her wise words in an effort to change their lives, her future is blindingly bright.