You are at:Home»Health»Healthy Living»Daddy’s girl competes with Alzheimer’s and lost memories
Tweet

I am 41 years old, married and have two ten year old boys. Honestly, my life is not what I expected it to be when I dreamt of motherhood.  When I was in my senior year of high school, my paternal grandmother had begun showing early signs of dementia and subsequently ended up living with my parents after I had gone off to college.  My father will celebrate his 67th birthday this month.  He was in the early stages of dementia by the time he was 60 years old and now has full blown Alzheimer’s disease.

It seems like this disease — Alzheimer’s and all that comes with it — has become an “official member” of my family:  using the guest room, adding another plate to the dinner table, adding more items in the grocery cart, adding another seat in the car, adding another appointment to my to do list.  That makes me a “sandwich generation child” (also known as SandGEN), a generation of people who care for their aging parents while supporting their own children.  About 22% of the US population is part of this sandwich generation.

November was National Alzheimer’s Disease Awareness Month, but one month is not enough to cover the other eleven months that the disease steals from families.  There are approximately 5.3 million people living with Alzheimer’s disease in the US and approximately 18 million people worldwide.  This number is expected to nearly double by the year 2025.  According to The Alzheimer’s Association (www.alz.org), Alzheimer’s disease is “a fatal brain disease that causes a slow decline in memory, thinking and reasoning skills.”  With a rapidly increasing baby boomer population, this disease is impacting more and more lives of people we know and love on a daily basis.

According to data shared by the American Health Assistance Foundation (AHAF.org), the following facts further detail the costly impact the disease has on families in addition to emotional toll: 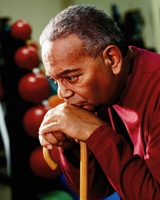 I grew up a daddy’s girl.  I loved sports and adopted my dad’s love for swimming, coastal living and listening to rainstorms.  In college he was a highly regarded distance swimmer.  He was always a big guy, but a gentle giant with a gentle spirit — a true image of protection and strength.  My dad was a leader in our community and had a vision for how things should be.  He was the counselor in the neighborhood for other dads and young men who were headed down the wrong path.  He started an afterschool program in my elementary school to help kids stay focused on positive things like homework, sports and crafts.

When his health took a turn for the worst, it was difficult to fathom seeing him in a weakened state of mind, body and spirit. He was the social butterfly, always working, planning, partying and enjoying the simplicities of friendships developed over a lifetime.  It has been challenging to accept the fact that his mind is not able to make as many connections with short-term memories; however, it is refreshing to witness the occasional glimpses of his ability to capture the long-term memories that have helped to shape who he is today.  At times, that may be the best part of this disease.  It can help reveal pieces of his timeline that have gotten lost in the day-to-day.

It’s amazing, when you are a child, you dream of being an adult and being “free” to do as you please.  However, as an actual adult, there are many times when parental input and nurturance is all you crave.  I never imagined having to be a provider or nurturer of an aging parent at this age.  I’m still reading bedtime stories to my sons.  I used to actually get angry, because I feel I’ve been cheated.  I don’t have my father (parents) in my life as an active grandfather.  I envisioned having the same kind of childhood that I had for my own children.  It has taken years to build a network of friends who have children of similar ages as my children to help recreate some of what I had growing up.  Although it’s not the same, it’s not all bad either.

I never would have interpreted Alzheimer’s as an opportunity for personal growth, but it has been presented in a way that has given my spirit permission to reconcile with the unknown, the uncontrollable.  This disease has taught me to live in the present and enjoy life’s simplest pleasures and God’s truest purpose:  to love unconditionally.  On the other hand, there is another factor:  how this disease affects the care-giver, in this case, my mother.  My parents were college sweethearts and have been together since my mother’s sophomore year.  On most days she appears as if she has lost her best friend, and essentially she has.  She was forced into early retirement because of the demands of the type of care he requires.  The toll is enormous and difficult to itemize.  Some days are longer than others, many things left undone, even more unsaid.

I have observed with a keen eye, the type of care he requires.  Due to countless surgeries (including a kidney transplant), mishaps, falls or infections, my father ingests at least 16 medications on a daily basis. This includes one medication for Alzheimer’s to help assist with memory; he was prescribed Aricept, which research states is a drug that helps slow the progression of the disease.  Another specialist recommended that he takes the medication Namenda without stating specific reasons other than to help support the degree to which the disease manifests.  After noticing an increase in his lack of recall, I learned that he was taking Namenda.  That conversation prompted another doctor’s appointment, which led the doctor to discontinue that medication. I have mentioned the idea of going off all of his medications and sending both of my parents to a natural detox retreat.  My role is clearly the advocate.  When they have appointments, I try to go so that I can ask questions or send a little list of questions with my mother.  At times, he has had 5-6 appointments in a month.

I have learned over time that prescribed medications are not always the best medicine.  Although, it has been challenging to consistently get my parents to buy into some more natural ways of easing the symptoms of Alzheimer’s, there are several lifestyle implementations that can be made for healthy aging adults that may reduce the likelihood of  Alzheimer’s symptoms.  Research reveals that some causes of the disease are due to nutritional deficiencies.  B vitamins, in particular, are crucial to cognitive functioning.   Some connections have been made to high levels of aluminum in the brain as well. Brain cells also deteriorate as a result of illnesses that attack the bodies’ immune system. Keeping the mind busy intellectually as well as getting ample fresh air and light exercise is necessary to maintain a healthy body, mind and spirit. Eating a well balanced diet of natural foods promotes healing.  These diets consist of fruits, vegetables, whole grains, lean meats, cold water fish (salmon, tuna, mackerel), quality, non-tap water, and herbal teas.  Herbs and spices such as turmeric have all been found to have effective results on brain health if used consistently.  Alcohol, cigarette smoke, processed foods, and exposure to environmental toxins, such as typical house cleaning products should be fully avoided or at least minimized with great effort.

When listening to my mother share her anxieties, she often says that “the hardest part of this process is losing a voice, because if I don’t initiate a conversation, no communication exists.  I have to rely on facial expressions and gestures; it’s like he’s absent and has nothing to say.  He has become very clingy and clutchy.  He needs attention almost like a child.  This has been emotionally draining and difficult and tiresome.”  I have experienced frustration trying to convince my mother that this is not the end — that this is not the longest farewell.  Although I still envision myself as daddy’s little girl, I must remember that he is not my husband and respect the array of emotions that my mother copes with daily.  A simple touch or hug is all that I can offer at times of high frustration.  Including my parents as much as I can in my children’s activities is an important responsibility that I have accepted.  Many nights after working a 10+ hour day, helping my sons with their homework and my own household tasks and responsibilities, I literally fall into bed at times with tears rolling down my cheeks.  I wish that the health care system could witness more of this struggle within families.  There is a wretched glitch in the system that does not seem to offer comfort in our greatest time of need.  The system that I have had to turn to is my network of family and friends that provide more than any health care plan can and that is genuine support, prayer and good old fashioned tender loving care.

There are many helpful resources and organizations available now more than ever.  Here are just a few that I have found helpful.

Maria Shriver has been a long-time advocate for Alzheimer’s care and research and was an executive producer of HBO’s “The Alzheimer’s Project,” which included the Emmy-Award winning segment “Grandpa, Do You Know Who I Am?” which is geared toward children and young teens coping with a grandparent’s Alzheimer’ disease. The film is based on her book, “What’s Happening to Grandpa?”   http://www.alz.org/mariashriver/mariashriver.asp

An assortment of sites on the Internet for Alzheimer’s care giving: