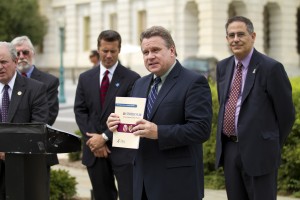 Over thirty years ago, a young Chris Smith could never have fathomed the long journey down the road that would lead to the House of Representative in Congress.  As a boy growing up in New Jersey, he had an affinity for boats and his greatest aspirations were to be a Navy man or work for the Coast Guard.  Yet fate had visions unimaginable to the Jersey youngster.

Today, Congressman Smith reflects on his early days as a tenacious young man determined to make his way through the swift waters of politics in Washington, D.C.  Without those crucial components:  a drive to succeed and a refusal to give up, Smith might have led a life far different and far removed from the powerful platform that is readily accessible to him.  However, his first run for Congress gave every indication of his pedigree.

“I got elected at 27, and ran at 25 and ran somebody else’s campaign at 23.  And even the loses — losing a congressional campaign is very hard – taught me great lessons.  I remember the day I lost, I wrote a press release – because I wrote my own press releases…I couldn’t afford to hire somebody – and it said ‘Smith:  I’ll be back,’ and I handed it out to all the press.  One reporter looked at it, laughed and went like this (wadding up the paper and tossing it in the garbage).  Two years later, when I did win – friendly like – I went back and said ‘Hey are you still throwing [it in the can],” he says jokingly, as he motions tossing paper in the garbage.  “So you have to be persistent in this job.”

With his propensity for tenacity, it is unlikely that another congressman or woman could have engendered the immense passion and courage required to stand on principle for the rights of victims in the U.S. and around the world.  Smith literally illuminates when he speaks about the bills, proposals, resolutions, initiatives and collaborations he has worked tirelessly on to bring better conditions to people who want nothing more than the right to live whole lives and obtain the pursuits our Constitution guarantees Americans.  Unfortunately, many atrocities around the world limit those pursuits, and Smith recoils at any notion that those crimes of violence will continue on his watch.

“If we’re silent on human rights, the bad guys look at that and say, ‘All they care about is trade and making money.  They don’t care if we put our people in prison [or if]we don’t have labor unions.’  China totally, totally represses its labor union movement.”

Smith says the U.S. must wield its power when it comes to trade and use it as a bargaining chip.  He laments our government’s lax approach to dictatorships such as China, which resembles appeasement.  He adds that under the Clinton administration, in May 1994, President Clinton “de-linked human rights from most favor nation status (now called permanent normal trading status) and that’s when we said human rights don’t matter.  And ever since then, human rights have spiraled down…because there was no benefit or penalty for these countries like China that engage in such egregious practices.”  Smith fervently adds, “We need to bring that standard of human rights to our trade policy.  It can’t be a talking point on page six of the secretary of state’s list of talking points,” he admonishes.  “It ought to be integrated in everything we do, including our trade policy and it’s not.”

He regularly meets with dissidents who are fighting for human rights in China and other countries.  He warns that if America does not take the lead, not only will more atrocities occur, but they will increase.

“Wei Jingsheng, the father of the Democracy Wall Movement, whom I met with when he was let out of prison.  When China thought they would get Olympics 2000 just by letting this great human rights activist out of prison, they didn’t get it,” he says.  “They got it years later – so they rearrested him and beat him almost to death.  He came to my hearing room afterwards and said, ‘You Americans don’t understand.  When you’re tough [and]transparent, they treat us better in the gulag (prisons), because they know they’re dealing with people they respect…who’s firm and has backbone.  When you’re kowtowing and like jelly, they beat us more in the prison camps.’”

Smith has used his life effectively throughout his thirty years as a public servant to both his country and his constituents.  His bold stand on human rights (even against such powerful countries as China), his legislation to combat human trafficking, his resolutions to recognize activists and dissidents during the anniversary of the Tiananmen Square massacre, his groundbreaking legislation to fund research of Autism, his bill to provide assistance to homeless U.S. veterans and his lobbying for a change in policy in China’s one child law and selective abortions that discriminate against girls are mere drops in the bucket when the full spectrum of his career in Congress is examined.

He recently helped reunite a New Jersey father with his kidnapped son in an emotional case that left many wondering if American parents have any recourse when their child is kidnapped and taken out of the country.  Additionally, when actor Ben Affleck — reportedly a Democrat — requested Smith’s support for his Eastern Congo Initiative to build war-torn communities in the Congo, the congressman — a Republican — crossed the political aisle for the sake of human dignity and human rights.  In a political climate where many Republicans and Democrats have virtually refused to work together, Smith has maintained his statesmanship.

Smith credits his unique value system for his unending devotion to those who become unlikely victims of circumstance.  He concedes:  “It comes from the Gospels – I’m a Christian, a Catholic – and my operating scripture, the one that motivates me the most, is when our Lord said, ‘Whatever you do to the least of my brothers, you do to me. The least in terms of circumstance, because we’re all equal before God…So it’s all about meeting the needs of people who are at risk and it comes right from that scripture Matthew 25.  And if we do that, it’s as if we’re doing it to God himself.”