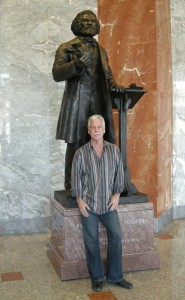 In 2012, after a five-year wait, a bill authored by Rep. Dan Lungren (R-Calif.) and back by Del. Eleanor Holmes Norton (D) was unanimously voted upon to have the Frederick Douglass statue placed on Capitol Hill.  “I think it is a really good way to show how a long time residence of Dc and advocate for voting rights is remembered,” said Ka’mal McClarin, curator at the Frederick Douglass National Historic Site. “It is a memory of him fighting for that cause.”

The Frederick Douglass statue, currently located at Judiciary Square, will soon be moved to Capitol Hill’s Emancipation Hall.  Douglass, a writer, abolitionist, and advocate for the equality of people is one of three African Americans to be represented in this hall.  Emancipation Hall holds two statues of notably exceptional peop  le from each state.   However, Washington, D.C. is not a state, which did not warrant a statue or representation, until now.

The creator of the Douglass sculpture, artist Steven Weitzman, has been a professional artist since the age of 19.  When Weitzman entered the National Competition for DC Arts and Humanities in 2006, he was required to create a clay model of Frederick Douglass. After the small clay model was formed in 2007, he then made a full-size clay model from which the bronze statue was formed.  The bronze was then placed on display in Judiciary Square in 2008.

“It’s a very incredible honor, a very humbling experience,” said Weitzman.  “I’m thrilled.” When asked what message he hopes people receive from his work of art, he says he hopes people see Frederick Douglass’s message and everything his life represented.

An actual date or time has not been scheduled for when the statue will be moved.