You are at:Home»Featured»Top 10 List of the Most Interesting People – Dante Butler: Putting cutting edge D.C. fashion on the map
Tweet 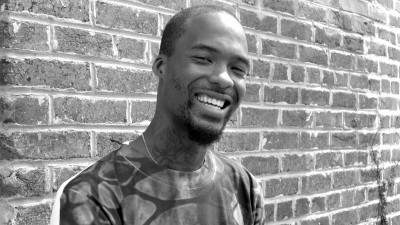 The District of Columbia is home to many young artists who continue to break bounds and barriers. Twenty-two-year-old Dante Butler is no exception.  The young, talented and often humble Butler is the founder of GreatnessWX clothing line.  He credits his career in fashion design to his passion for art and his ultimate objective is to impact the fashion world with his more artistically expressive edge of designing.

Butler sat down for an interview at the Long View Gallery in Washington, D.C. and provided a closer look into his current endeavors, his sudden popularity, and his future plans for the line of clothing.

So tell us about yourself.  Where are you from?

I’m Dante Butler, A.K.A WizzolX, and I’m from Washington D.C.

In the name ‘Wizzolx’, the “L” is not pronounced? What is the concept behind that?

No, not at all.  The concept behind WizzolX is “wizzo”, it stands for a wizard, someone who is creative or gifted or skilled at their talent.  The “x” stands for the Roman numeral that is a 10, and I have a daughter that was born on the 10th of February. 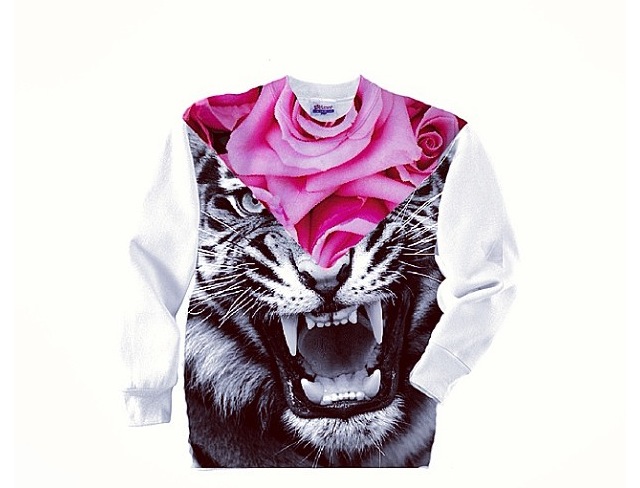 How old were you when you discovered your artistic talent?

I would pretty much say around five or six, but it never went to use until 2010.  I thought maybe I should put it to use towards something, but I never knew what it could go towards.

So, did you start out drawing, or maybe coloring pictures on your mom’s walls?

(laughs) No, I wasn’t that bad.  I would just draw a collage on a piece of paper at school every day, until one day someone said, ‘You should make something happen with it.’  And one day I did.  I decided I could mix both worlds together. Because nowadays, you don’t have fashion and art, you just have fashion.  So I decided to mix art with

Well, that’s a good mix.  When you were younger, did you always want to be a fashion designer when you grew up?

I would have to say no.  I wanted to be Michael Jordan. (laughs)

Were you any good at basketball, or were you more of a bench rider?

No, no I was good.  But I think what I’m doing now turned out to be better.

When did the whole clothing line come about?

Basically in 2011, but it really took off this year and last year, and it is everywhere.  I still think that it’s crazy, and it amazes me that people go crazy when they see the stuff that I do.  And my work doesn’t amaze me, because it’s the same thing I have been doing from the jump. 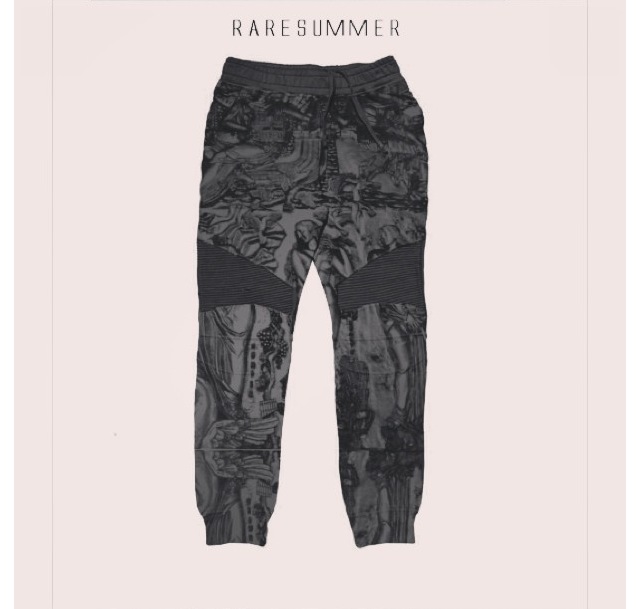 How do you go about transferring the images onto actual clothing?

Who are your biggest inspirations, in the fashion world and in general?

I would say Jeremy Scott and Kanye West.  Even though Kanye West isn’t a fashion designer, he has his style.

Well, he has his shoes, the Louis Vuitton’s and the Yeezy’s.

Yes, yes, he does.  I admire him and Jeremy Scott, because they both push it to the limit.  Like Jeremy Scott, he will give you a kind of ‘What is that?’ reaction, but it’s catchy.  And Kanye West is more like, ‘I don’t care; it’s me.’

That’s where I come in at, with a mixture of both sides.

Where were the images for your line discovered?

Just mainly from my everyday life.  Like this shirt that I’m wearing, it is a snake, like poison. Poison to me is a big thing.  Poison meaning poisoning people’s brains from where I grew up.  So when you look at the drug dealers and all that, it’s like poison, because everybody wants to be them.  But for me, I took it the opposite route and went into something positive.

And how much do these shirts go for?

I don’t want to tell you. (laughs)  They go for fifty dollars and up.  And we have everything.  [There are] sweaters, sweat pants, and girl’s stuff.

We have kid’s sweat pants too. 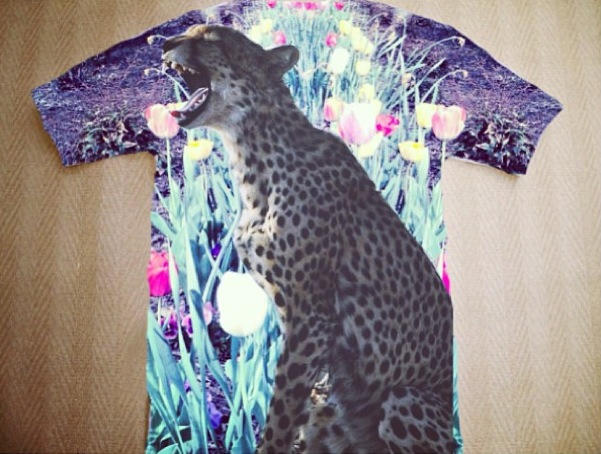 What is the website, and do you release items every so often, or is everything on there already?

The website is www.greatnesswx.com and we actually have an event coming up, and everything is going to be at the event.  You can check the site for details of the event and you want to be there.

Can you purchase items online?

At this time no, because we actually want to do it at the event.  So, everything at the event will kick off like a launch party.

How did you go about gaining funding or support for your line?

I don’t know.  A lot of people saw what it was about, even a couple of people from Maybach Music.  I have no idea how, but they found me.  Even people on Instagram, they see things that I put up and they say “Yo, I love it” or “It’s crazy.  What you’re doing is amazing.”   I’m not amazed yet, because I know what I can do and what I am capable of.

Have you considered opening a store?

I have, but not too much.  I was invited to sell my line at a couple of stores, but I know my worth, so I said no.  I feel like we deserve our own store.  If I were to open a store, it would have to be in D.C.  It would be in New York too, but it would have to be in D.C. first because, that is home and a lot of people out here are proud of what I am doing.  I inspire so many people here, and I didn’t even know it.  A lot of youth are inspired by me.  Whereas, I thought I was just giving them my artwork, but they say what I’m doing is not regular.  People will recognize me and say, “That’s him,” and ask to take a picture, and I’m just me.  Nowadays, you have rappers talking about guns and that type of lifestyle, and we are not about that at all, and that’s what we want to show them. 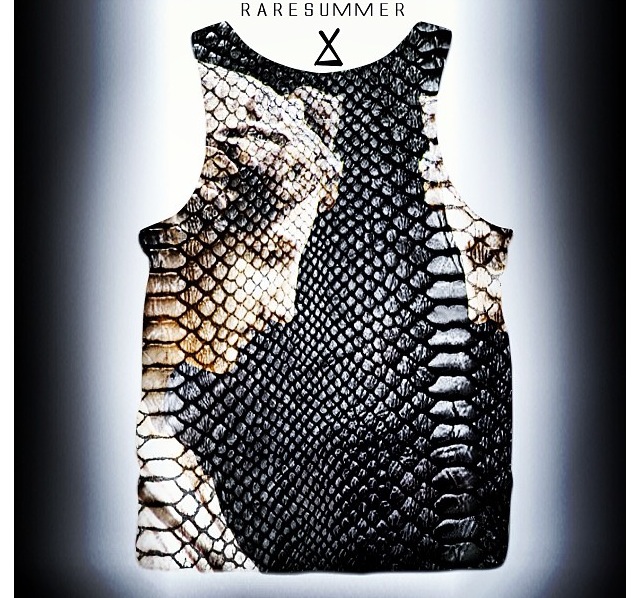 Dante Butler’s clothing and images were displayed and available for sale at his gallery event.  An exclusive

collaboration he did with Adidas was also released there for the first time.  Various samples of Butler’s work can be found in publications such as Complex and XXL Magazine.  Some of his work is also featured in cover art for some Maybach Music Group rap artists. 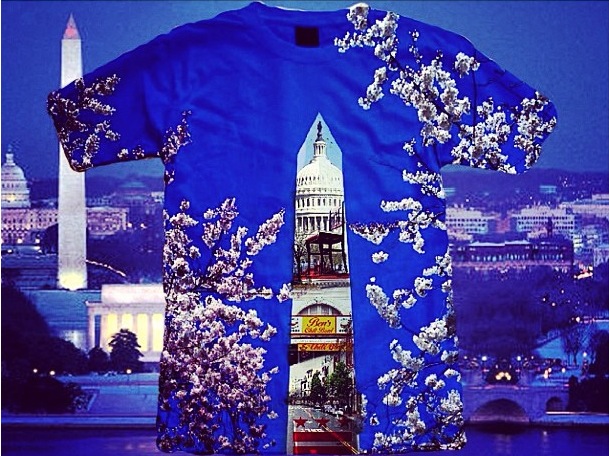