You are at:Home»Features»Bon Appetit»BRABO: Fine Delectables of Antwerp Come to King Street
Tweet 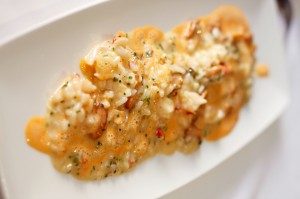 As a half-Belgian, half-American child growing up in Germany, chef Robert Wiedmaier was no doubt familiar with thelegend that lends its name to Old Town Alexandria’s BRABO. As the story has it, Salvus Brabo, a mythical soldier, was responsible for saving the Belgian city of Antwerp from a giant during Roman times. For good measure, our hero tossed the giant’s severed hand into the Scheldt River — an act that is commemorated in a statue in the middle of Antwerp’s Grote Markt.  This scene has been recreated in the logo that adorns BRABO’s menu. 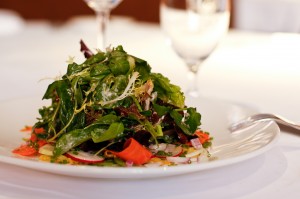 Recent years have seen Robert Wiedmaier develop into more of a giant than a Brabo on the DC restaurant scene. Two of his restaurants, Brasserie Beck andMarcel’s have been staples of the downtown fine dining scene for several years.  Mussel Bar, which opened less than a year ago in Bethesda, proudly displays Wiedmaier’s name as part of its formal title, likely as proof of its street credit. Wiedmaier himself has already made a name for himself as one of DC’s most visible chefs, one of its most demanding to work for and one of its best. And yet, according to a waitress at BRABO, the restaurant’s grand opening in Old Town two years ago brought with it an element of resistance, presumably from a faction that assumed the bistro’s modern vibe would not agree with the neighborhood’s colonial look. “There were people around here who were a little worried that it would be ‘formal this’ and ‘dress code that,’” she remembers, “but it really isn’t like that at all!”

With its European roots and its dimly lit dining room, BRABO does have the potential to intimidate, but dinner here also has a certain warmth and ease that trickles down directly from its staff. General Manager Gonzague Muchery is largely responsible for the cheerful tone. A thick-accented, amiable Frenchman, Muchery attends to many of the tables himself, while giving BRABO an authentic European stamp to match its name and background legend. A devoted disciple of Wiedmaier, he understands that the kitchen’s “secret formula” is in fact its lack of secrecy: “Simple dishes, simple flavors,” he claims, “You won’t find many dishes that mix sweet, sour, savory.”

The dining room itself, which some may have initially feared to be stuffy, follows the same rule of simplicity. Lamps and large wood-framed mirrors are the only adornments on the surrounding walls. Elsewhere, subtle touches — a collection of old gas lanterns, the red brick bar — serve as a tribute to King Street’s colonial charm. Diners seated in front of the wide front windows will be treated to a panoramic view of Old Town’s main drag (whose surrounding trees are beautifully lit with white Christmas lights during the winter months) and the unique sensation of experiencing two centuries and two countries at once. 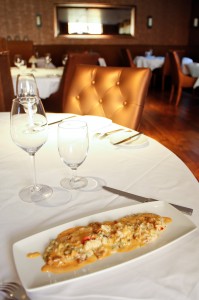 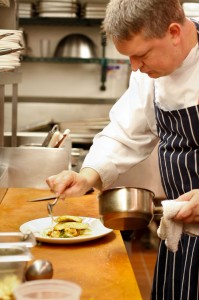 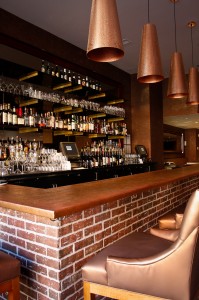 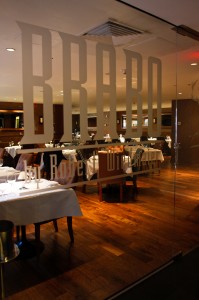 In spite of its Belgian roots, BRABO’s menu is largely Modern American, although many of its dishes are at leastEuropean influenced. The Maine Lobster Risotto ($18), found in the Starters section, is a good place to begin; mixed with generous chunks of tender lobster meat, the risotto itself is sweet from the unexpected addition of vanillabean and creamy without being too heavy. The most artistic dish on the menu, Mussels Gratin ($18) features de-shelled mussels served in an attractive kaleidoscope with tomatoes and spinach and melted into a thick gruyere. It’s a shame that heartier appetizers like the risotto, gratin and ravioli may distract from the more unassuming Roasted Beets ($14). The juicy beets, which could be mistaken for very ripe tomatoes, come in three varieties and are drizzled with a savory goat cheese fondue. As light and simple as they are, they are a true highlight.

BRABO’s entrees are Modern American, with occasional hints of old Europe. The perfectly seared Maine Scallops ($29), topped with buttery spaghetti squash, are a signature dish. The carefully prepared Herb Crusted Rack of Lamb ($36) comes in three shanks — white on the outside fading into a juicy red in the middle — all served atop their own bed of lush, garlicky potato puree. The formidable Braised Pork Shank ($27), probably the largest entree on the menu, is heavily glazed, and falls right off the bone.

Any place that claims Belgian roots is obligated to serve one of Belgium’s famous waffles. BRABO’s Belgian Waffle ($8) has the right consistency — not too crispy or fluffy — but the addition of both candied bacon and bacon ice cream feels like overload. The Chevre (goat cheese) Cheesecake ($8) is a bit of an acquired taste for diners more accustomed to finding the cheese on a salad. The Lime Semifreddo ($8), a tart frozen mousse, slightly thicker than ice cream, may be the strongest entry.

Of course, it would also be unconscionable for a Belgian restaurant to think of itself as authentic without an extensive beer menu. BRABO has beer in spades, including several rare Belgian specialties in the twenty to thirty dollar range. Perhaps more surprising is its extensive wine list presided over by new sommelier David Purka, who is fresh off a stint at Brasserie Beck. One of the most hands-on sommeliers in the area, Purka is willing to come up with wine or beer pairings for every course of the meal. Diners could do a lot worse than hand over the reins and allow him to make the drink choices for the evening.

On the other side of the entrance to the Lorien Hotel is BRABO Tasting Room, a less formal altenative to BRABO, which serves many of the same dishes, along with several sandwiches and wood-fired tarts. It’s a good option for a lunch or informal dinner. In tandem, the two Wiedmaier restaurants can only strengthen the neighborhood; this is certainly a nexus point between Old Town and Old Europe.