You are at:Home»Featured»IN THE SPOTLIGHT WITH WENDY THOMPSON – Jennie Forehand: Beloved State Senator retires, leaves behind a smoke-free Maryland and more
Tweet 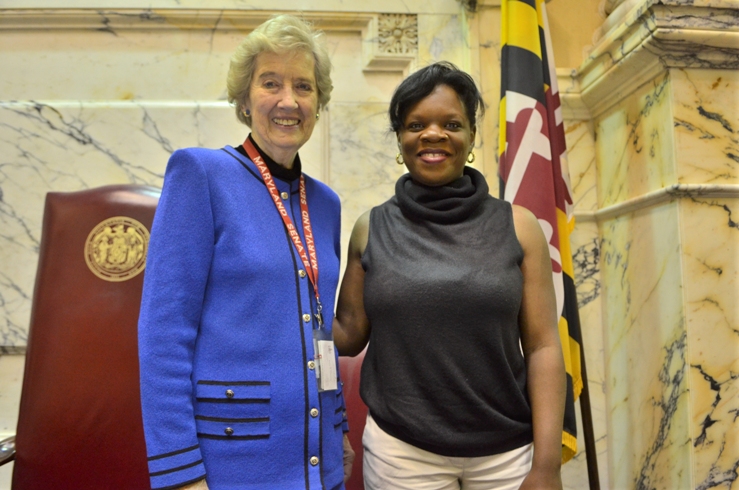 If there is one Maryland legislator—among others–who works ferociously and tirelessly in the General Assembly, it is Senator Jennie Forehand.  Her list of accomplishments makes onlookers sigh in disbelief as she chronicles her life and career in her soft pastel office.  The cool tone of the room adequately mirrors her gentle southern temperament and accent.  She remembers walking into a committee meeting during her first week on the job when she noticed that there was an ash tray on every seat and every desk. 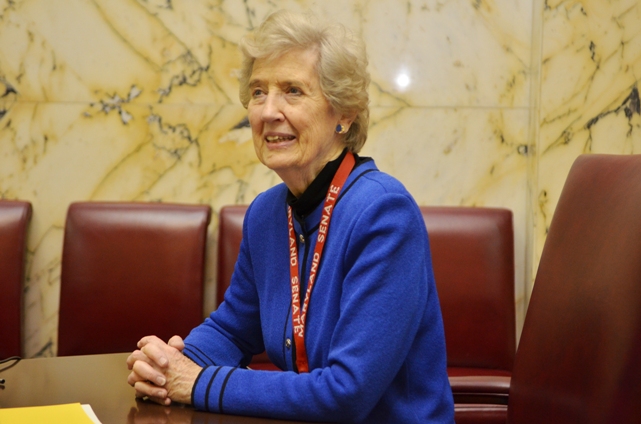 She was the first person to arrive; she walked around and collected the ash trays and hid them under the radiators. “When the committee was ready to begin, the lawmakers came in and began searching for their ashtrays.  When the men began smoking anyway and putting the ashes in the cuffs of their pants,” she mused. “I was slightly amused, but that was the beginning of my passion to get people to stop smoking.” Forehand did this for three days and it eventually led to Maryland becoming smoke free. This was  an issue close to her heart, because her father, who never smoked himself but worked around people who did, passed away of from lung cancer.

36 years later, Senator Forehand has announced the end of her time of service 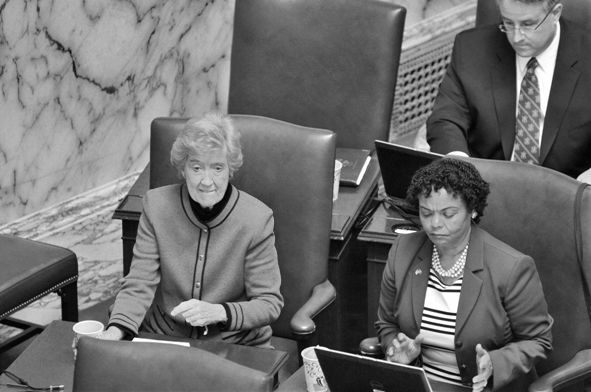 as a Maryland legislator in the General Assembly. January 5, 2015 will be her last day. “I’ll miss the people. And I’ll miss not being able to help people as easily as I do here,” she says thoughtfully.

Forehand has dedicated the better part of her life to serving the state of Maryland and its residence. For 36 years she has served the state in the areas of technology, transportation, and public policy in first the House for 16 years and then the Senate for 20.

A native of Charlotte, N.C., Forehand said that she had “no inkling that [she]would wind up doing [politics].” But as a person that has never been a stranger to service and being active in her community, it 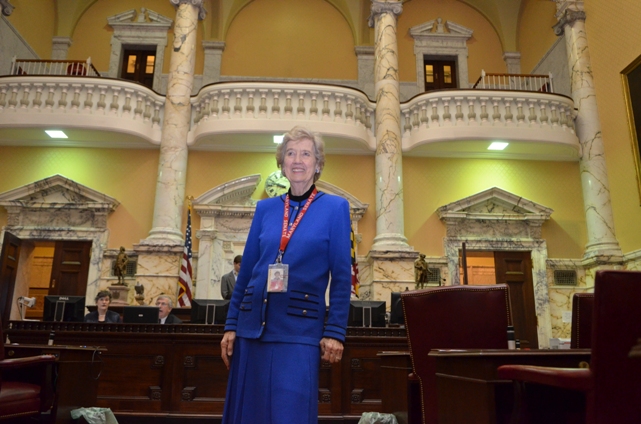 seemed almost inevitable that she would make a career out of it. In high school, she was involved in many activities and even went out for the men’s basketball team, prompting the school to start a female team. As an only child, Forehand immersed herself in activities ranging from volunteering to clubs to church projects in order to stay social. “I was always looking for more things to do to meet more people,” she expressed as she sat in her quaint office in Annapolis. Her parents also set an example for her, taking her along with them on their own service projects. She continued to remain active throughout her time at the University of North Carolina Chapel Hill.

While there, her mentor arranged for her to meet her role model: Eleanor Roosevelt. “Mrs. Roosevelt was coming to town and [she]was driving the narrow 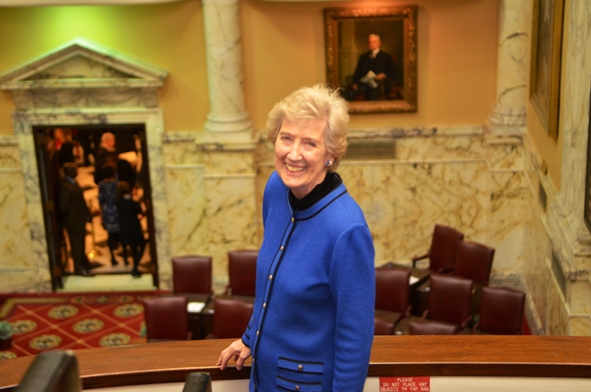 streets in Chapel Hill in a pink Thunderbird Convertible,” Forehand reminisced. “He had her and she looked happy and was waving like she was the queen of the day,” she continued. As her role model, Mrs. Roosevelt unknowingly inspired Forehand to make a difference whenever she could. “It’s wonderful for young people to find somebody that they can appreciate and somebody that has done something really special to help other people,” she says reflecting on her admiration for Mrs. Roosevelt. “I tell young people today to find somebody like that and see if you can walk in their shoes.”

Once Forehand moved to Maryland, she settled into the life as a mother with two kids– a son and a daughter– but 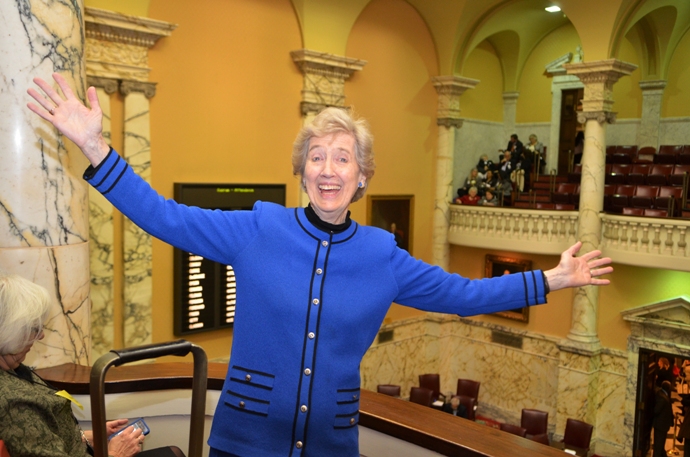 continued to be active in her community. She was a PTA mom, performed numerous community activities, was on the Montgomery County Health Planning Board, and was also able to get Shady Grove Hospital accredited after some difficulties. “I was a mom at home, but I was always volunteering for something and working with kids or the church or something,” she says. With a history of service and determination, Forehand set out in 1978 to become senator of District 17, which encompasses the areas of Rockville, Gaithersburg and Garrett Park in Montgomery County. After a hard fought election, she won and took office in the Maryland House of Delegates. Her first position in office was to be named to several boards and commissions, including the State Physical Fitness Commission and the Board of Lung Association.

But smoking was not the only issue that Forehand tackled with vigor. She has been credited with getting the controversial Intercounty Connector – a road connecting the Washington D.C. area up to Baltimore–that has been proposed since the 1960s. On the technology front, she got a bill passed to remove taxes on computer services, an area important to Montgomery County.  She also made huge strides in the area of human trafficking in Maryland. “I guess we’re all naïve to think that something as horrible as that is not going on in our communities,” she says. “You would think it would go on in some foreign country, but never here. So we are trying to raise the public’s awareness.” Along with others, Forehand helped pass legislation that made it a felony to traffic girls.

Working on legislation for so many years, Forehand says that it has made her a more courageous person. “I will go up to anybody who I think can solve a problem. I don’t hesitate to call a secretary of a department, and I will call the mayor. I’ve learned to talk to people who are involved,” she says. But overall, she is pleased that she was able to help the people of her district.  “The things we were able to do to improve the lives of people in Maryland, that’s what I’m really excited about. My fingerprints are on some of that,” she remarks.

As for what’s next, Forehand is thinking about joining a few boards of commissions and will continue to do things in the community. She would like to go and visit her children who live in Indianapolis more often and possibly continue playing basketball, she says humorously.  Her daughter graduated from the Naval Academy and her son is an architect.  “I’d like to mentor some kids,” she says. “Maybe I’ll clean my house,” she jokes.  As she walked out of the Senate chamber doors during the videotaping of the interview, she turned and said, “Oh, that’s a great shot, like I’m leaving for the last time,” she quips, with that coy grin that won the hearts of her colleagues who work in the State House. Indeed, in April she will be leaving as the senator for the last time.