You are at:Home»Featured»HUMAN WRITES – Immigrant children: Will work for freedom in the home of the free and the brave
Tweet 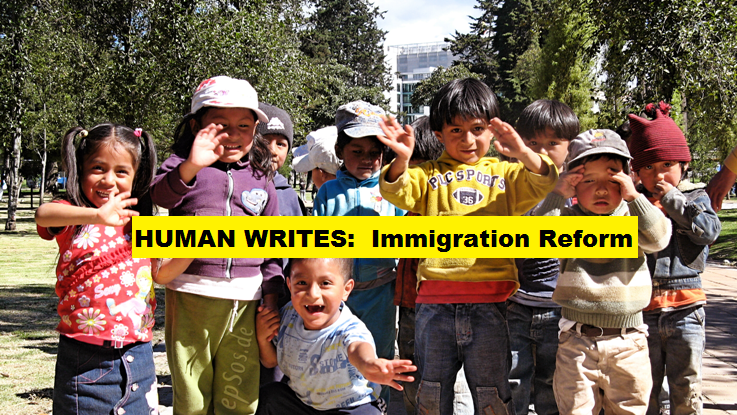 Earlier this summer a flood of unaccompanied children from Central America arrived at the U.S. borders seeking asylum. Although unaccompanied children from Mexico and Central America are not unheard of, the amount of children immigrating this summer makes it a pressing humanitarian issue. A majority of the migrant children and families are from Honduras, El Salvador, and Guatemala, but interestingly, in 2013 Honduras was ranked with the highest number of homicides in the world, El Salvador 4th, and Guatemala 5th in a report by the United Nations Office on Drug and Crime. Despite these facts, the surge of unaccompanied minors this summer took everyone by surprise.

As the number of unaccompanied children exceeds more than 50,000 and continues to grow, the nation is split on how the situation should be handled. Earlier this summer, it was speculated that some republicans were planning a possible impeachment of the president for exceeding his executive power after President Obama proposed immigration reform and submitted an urgent request for $3.7 billion to deal with the humanitarian crisis on the border. In response, the House Speaker, John Boehner (R–OH) wrote a letter to President Obama blaming the humanitarian issue on him. “The policies of your administration have directly resulted in the belief by these immigrants that once they reach U.S. soil, they will be able to stay here indefinitely.” Boehner insists that before any immigration reform takes place the border needs to be secured and our laws enforced. Unsurprisingly, before Congress left for their recess, the proposal was rejected.

According to Dr. Mark P. Jones, a professor at Rice University and Chair of the Political Science Department, immigration is a multifaceted issue. “It’s a difficult topic, because you combine people’s concern for the humanitarian situation and the belief that the United States is a country of immigrants, combined with the reality that sovereignty is in a main way defined in part by your borders and that there is belief by many Americans that the U.S. can’t let everyone in…In other words, you have two splits: on one side — an economic split — people are concerned with immigrants taking jobs or competing with jobs or using social services.” Jones continued, “There is also a cultural aspect where an overwhelming majority of immigrants…are non-European [who]come from Latin America and to a lesser extent Asia. Therefore, [they]are changing the racial and ethnic composition of the United States. So mixed in with the economic concern are issues about the United States and its growing diversity. So I think [that]those are two different issues that play there and it’s an issue that splits the parties in terms [of]Republican and Democrats but also splits each party…”

Jones stated that historically, these countries have never been economically successful. Thus begs the question of why the surge of children occurred this summer and not earlier? Dr. George T. Diaz, history professor at the Sam Houston State University, stated that there are a plethora of thoughts as to why the surge of minors occurred this summer.

One idea that abounds is the thought that “aside from the gang violence that is in Central America right now…criminal networks began to diversify their economies after the Mexican Drug War…So rather than focusing on trafficking narcotics; organized criminals in Mexico began to diversify their economies and began to tax and extort migrants…In order to gain more clients, human traffickers perpetuated a false rumor that if unaccompanied minors entered the country the United States will grant them amnesty…[However] as the United States is working to repatriate a lot of these individuals who entered the country, that rumor has become dispelled, so the flow of migrants has been declining…”

Although a handful of individuals — including children — have been repatriated, there has been a lot of backlash by many human rights organizations. Amnesty International published an article by Natalia Blutz that states that “Under international law, the U.S. government has an obligation to ensure that the human rights of unaccompanied migrant children are respected, protected and fulfilled.” The expedited process and deportation of women and children has caused several civil rights groups to file a lawsuit on August 22nd against the federal government at the court of the District of Columbia. The following is the ACLU’s (American Civil Liberties Union) complaint against the expedited process to repatriate individuals that have pleaded for asylum:

“These mothers and their children have sought refuge in the United States after fleeing for their lives from threats of death and violence in their home countries. U.S. law guarantees them a fair opportunity to seek asylum. Yet, the government’s policy violates that basic law and core American values. We do not send people who are seeking asylum back into harm’s way. We should not sacrifice fairness for speed in life-or-death situations.”

A second human rights violation, according to Clara Long, a U.S. researcher for Human Rights Watch, is that “children in detention face anxiety, depression, and long-term psychological and emotional damage; it should never be considered in their best interest to lock them up.” Long adds, “Instead of funding additional detention beds, Congress should be adding immigration judges and improving access to legal counsel to make asylum fairer and more efficient.” Human rights organizations are also concerned that mothers are not currently separated from their children when asked by authorities the reason they are seeking asylum. This is necessary, because the mothers at times are embarrassed to discuss issues like sexual abuse or death threats in front of their children.

Although much is left to be done in order to protect the individual’s human rights upon their plea for asylum, an abundance of organizations have been willing, able and offering to provide shelter, food, and personal needs to those asylum seekers. The question that begs to be asked is why are children being sent back to their home countries if they are petitioning for asylum? In a quest for immigration reform, lawmakers and members of Congress have dismissed the creed on which the U. S. was founded: “Give me your tired, your poor, your huddled masses yearning to breathe free.” Where hard-line immigration reformers see lawbreakers, immigrant children are simply exercising their human rights to be “the tired, poor and huddle masses yearning to breathe free,” because America is where those seekers were once welcomed.