You are at:Home»Featured»ENTERTAINMENT – “We will Rock You” brings Freddie Mercury back to life
Tweet 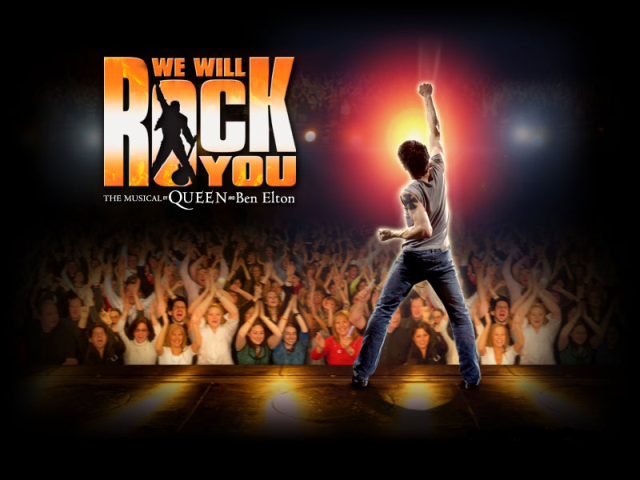 “They wanted to pay homage to Freddie, because he was so ahead of his time as an icon, a sexual icon and a pop icon.”

— Ruby Lewis, lead actress in the musical We Will Rock You

It was August 28, 1996. Roger Taylor, the drummer of the British rock band Queen, and its lead guitarist Brian May were at Venice Film Festival for a screening of some short films made by the band. During the festival opening, they met the American actor, director, and producer Robert De Niro, also the head of the production company Tribeca Film Center. De Niro told them that his daughter is a fan of Queen and asked Roger and Brian if they had ever considered creating a musical based on their songs.

Six years later, on 14 May 2002, jukebox musical We Will Rock You opened at the Dominion Theatre, London, UK. On October 15, 2013, its North American tour began at the Hippodrome Theatre in Baltimore, Maryland. The dreamer, Galileo, and the sassy rock chick, Scaramouche — as the English comedian Ben Elton, who wrote the musical’s script describes them — are the play’s heroes. The original cast includes Brian Justin Crum as Galileo and Ruby Lewis as Scaramouche.  The DC Spotlight sat down to interview Lewis, as the musical toured the U.S.

How did you get the part in We Will Rock You?

LEWIS: I live in Los Angeles and their casting agency came to Los Angeles initially, so I went in a couple of times there. Then for the final callback I had to fly to New York and audition in front of Brian May, Roger Taylor and Ben Elton. Robert De Niro just left the room (laughs). There were probably 20 people in the room for my final callback, I was one of the last auditions of the day, so I just went in and probably half an hour later I’ve heard that I’ve got the part.

What part does your character play in the musical?

LEWIS: I play Scaramouche; she’s the love interest of Galileo, who is our protagonist in the show. She and Galileo are the young bohemians who escape and go on this journey to try to find and resurrect rock and roll.

How do you feel about the issue the musical focuses on: “ a future age of mindless manufactured music, where everyone dresses the same, thinks the same, is the same.”  How do you like the way it is addressed in the play?

LEWIS: The show is written almost 12 years ago, and now it’s scary how much closer to that reality we have come. I think that it’s scary how young people, especially now, these days, only hear professed music and they only see people who are also professed by these big production companies. I think that the show is a really great reminder that we need to get back to the heart of the music and not to worry so much about the media and popularity and really just do it.  Because we have to, because we love it.

What are the similarities between you and the character?

LEWIS: I definitely relate to the character. I was feeling a little outcast when I was a teenager; it’s difficult being an artistic teenager. I definitely didn’t follow conformity and I got my own thing. A lot of times that meant not being the popular one or not being invited to the parties, but I had parents who were very supportive in my endeavors in theater and dance. I can understand how frustrating it can be to not feel popular, not feel like you’re being heard as a young person.

What is your greatest memory from working with the play?

LEWIS: The greatest memory is definitely the opening night in Baltimore. Brian May played Bohemian Rhapsody with us. He came out and played the big guitar solo and to share the stage with him and, to me, to speak with him was the highlight of my life.

Because of the complexity of the Bohemian Rhapsody, before appearing in its entirety in the musical, the entire song had never before been staged live by Queen or anyone else. How did the team manage to do that?

LEWIS: The orchestrations and the vocal arrangements in We Will Rock You are just genius. You know when you listen to Bohemian Rhapsody, the record, it sounds like a lot of people singing, because Queen layered their voices.  Now, for all of us 25 people, to be singing it at once the different voice parts, it really comes to life in a very reminiscent way. Not to mention that our band is so stellar that they managed to recreate the sound, the iconic sound, and it really comes to life and it’s very special for the audience to be a part of it.

Ben Elton is an English comedian and We Will Rock You was first released in England. Was the script adapted to each audience? How did the American audience react to English humor?

LEWIS: Yes, we actually had a lot of artistic license during rehearsals because living in America, we knew the pop culture a little bit better. We have definitely made some changes to the script so that it is more relevant to American audiences.  We’ve changed the humor a little bit too, because our sense of dry wit or sarcasm is just a little bit different then the British dry wit. It was wonderful to work with him (Ben Elton) and figure out what was going to work over here.

Is Freddy Mercury’s gay sexuality reflected somehow in the musical?

LEWIS: His gay sexuality specifically isn’t touched upon. His love of life, flamboyance, the magical, the mysterious and being yourself, being an individual, those are really the themes that specifically Brian and Roger wanted to implement into the musical. They wanted to pay homage to Freddie, because he was so ahead of his time as an icon, a sexual icon and a pop icon. I know they wanted to be very respectful and give him his due recognition.

What role did Jim Beach, the long-time manager of the British rock band, play in setting the musical?

LEWIS: He was mostly there to help manage Brian and Roger. I know he stays very busy, because he has endeavors all over the world, so we didn’t work with him one-on-one specifically, but we did get to meet him and spent time with him. He did get to see the product that North American cast came up with.

The drummer of the rock band Queen Roger Taylor and the lead guitarist Brian May were music supervisors for the play. Did any other members of the band react somehow to the musical?

LEWIS: No, they are the only two now who had their hands on the We Will Rock You musical. I know they feel very passionate about it, but just the two of them are really there to make sure that the artistic integrity and musicianship remains intact. They handpick all of the musicians and they listen to all of us sing and make sure that we can really do it justice.

Why do you think Robert De Niro, the head of the production company Tribeca Film Center, was interested in creating a musical based on Queen’s songs?

LEWIS: Well, from what I’ve read, he’s been a Queen fan for a long time. There was an influx of musicals that included songs from different artists and I think he saw that with Jersey Boys or with the other jukebox musicals that this was a good time to try to bring Queen’s music to life on stage. It is so theatrical (their music) that I think it was a really wise choice. I could tell after meeting him that he is very moved by Queen as individuals, as human beings, and I can also tell that he just really loves its music and is very nostalgic about it.

For the past 12 years, the musical We Will Rock You, which includes over 24 of Queen’s songs, has been seen in five continents, 17 countries, playing to an audience of over 15 million people. In Washington, D.C., it will open at the Warner Theatre (513 13th Street NW) on Tuesday, June 3, 2014, and will stage eight performances through Sunday, June 8. Tickets are on sale now.