You are at:Home»Featured»COMMENTARY – Truth behind Michigan State Senator Knollenberg, who said, “We can’t make an African American white.”
Tweet 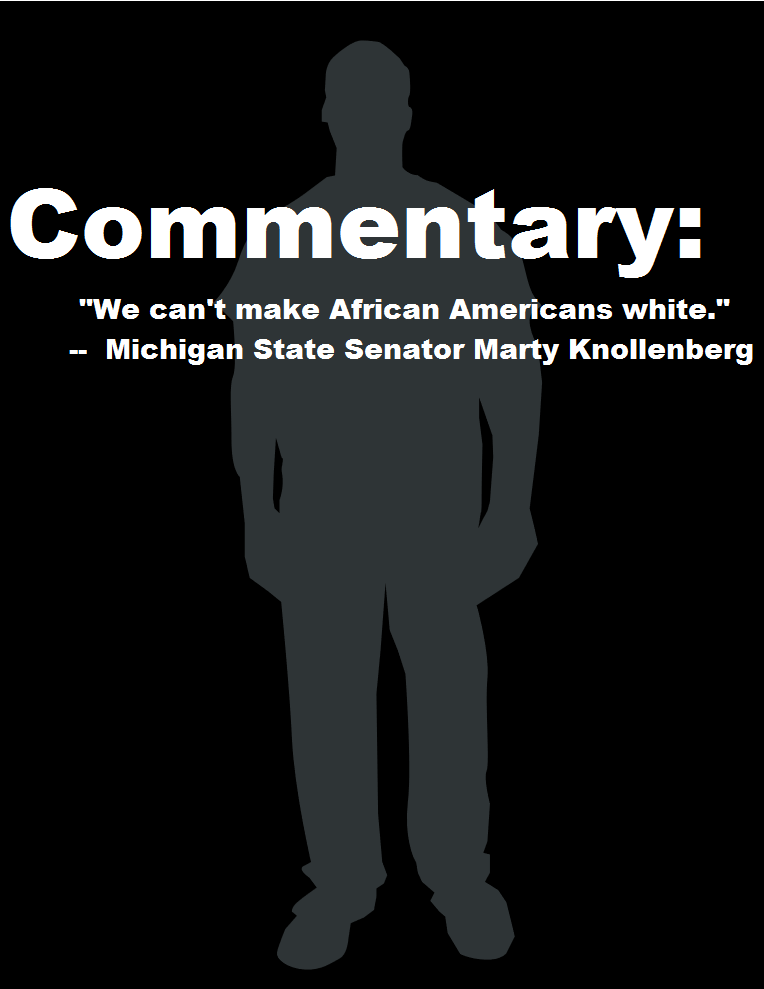 Michigan State Senator Marty Knollenberg was waylaid by an intrepid WXYZ TV reporter and responded to the outrage over comments he made that were widely perceived as racist this week. I don’t presume to read Knollenberg’s heart and am unversed on his record. But beyond what he said at the hearing, Knollenberg’s defensive and borderline haughty attitude when confronted by the reporter is awful. It reinforces the reality that, no, most white people don’t get it.

But, you know what? The truth is that the vast majority of white kids do have enormous family wealth, income, stability, and neighborhood security advantages over most of the African American children living in Detroit and Michigan’s (and America’s) other failing urban school districts. This has a profoundly negative effect on how well these disadvantaged children of color do in school.

If that wasn’t bad enough, the schools themselves are — for the most part — disastrous. There is not one. Not one large urban school system in the U.S. achieving anything approaching satisfactory — never mind world-class, performance. This includes the Houston, Dallas, San Antonio and Fort Worth districts here in Texas. Such an unmitigated, uninterrupted, exorbitantly expensive (Government-run schools spend more than three times what was spent in 1960 per pupil, inflation-adjusted.) record of failure wouldn’t be permitted in any other arena. But because most of the victims seem to be poor pupils of color, this disgusting tragedy is allowed to continue.

But black and Latino kids aren’t the only victims. Wake up middle and upper-income white people. You’re paying thousands of dollars a year for this heartbreaking catastrophe that saps American competitiveness and exacerbates every social problem you decry. Geoffrey Canada’s Harlem Children’s Zone, St. Philips in Dallas, Success Academies in New York City, KIPP Academies and similar non-government-run schools and before and after school programs demonstrate how the disadvantages that frequently accompany being poor and of color can be overcome spectacularly.

Key: Government should fund — but not run — the schools.

So race isn’t the issue. The legacy and social pathologies all too often attendant to being black in our country due to what the white power structure put into place over centuries is. Beyond the racial insensitivity he demonstrated, it’s sad that this maladroit politician gave the AFT teachers union a PR layup. It, along with the NEA, is as damaging to our country as Daesh — more damaging, in terms of the sheer number of low income African American children whose lives are destroyed by unionized, government controlled schools.