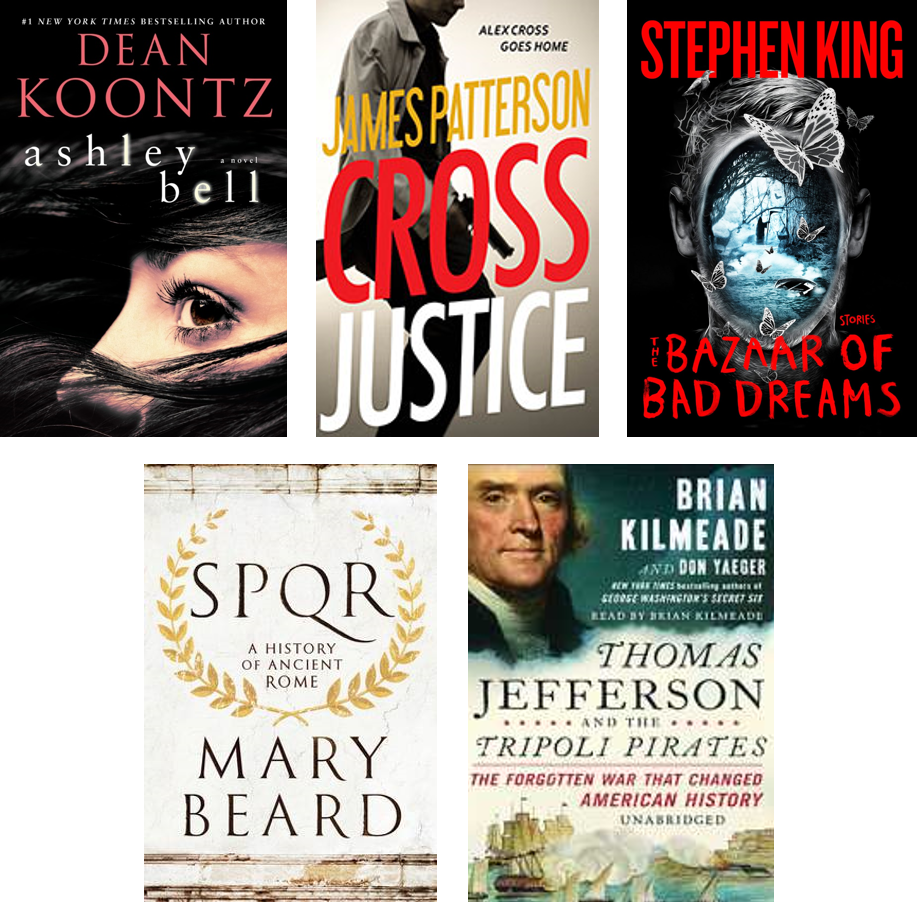 1) The Bazaar of Bad Dreams

Since his first collection, Nightshift, published thirty-five years ago, Stephen King has dazzled readers with his genius as a writer of short fiction. In this new collection he assembles, for the first time, recent stories that have never been published in a book. He introduces each with a passage about its origins or his motivations for writing it.

There are thrilling connections between stories; themes of morality, the afterlife, guilt, what we would do differently if we could see into the future or correct the mistakes of the past. “Afterlife” is about a man who died of colon cancer and keeps reliving the same life, repeating his mistakes over and over again. Several stories feature characters at the end of life, revisiting their crimes and misdemeanors. Other stories address what happens when someone discovers that he has supernatural powers—the columnist who kills people by writing their obituaries in “Obits;” the old judge in “The Dune” who, as a boy, canoed to a deserted island and saw names written in the sand, the names of people who then died in freak accidents. In “Morality,” King looks at how a marriage and two lives fall apart after the wife and husband enter into what seems, at first, a devil’s pact they can win.

Magnificent, eerie, utterly compelling, these stories comprise one of King’s finest gifts to his constant reader—“I made them especially for you,” says King. “Feel free to examine them, but please be careful. The best of them have teeth.”

Alex Cross left his hometown, and some awful family tragedies, for a better life with Nana Mama in Washington, DC. He hasn’t looked back.

Now his cousin Stefan has been accused of a horrible, unthinkable murder, and Cross drives south with Bree, Nana Mama, Jannie, and Ali to Starksville, North Carolina, for the first time in thirty-five years. Back home, he discovers a once proud community down on its luck, and local residents who don’t welcome him with open arms. As Cross steps into his family home, the horrors of his childhood flood back–and he learns that they’re not really over. He brings all his skill to finding out the truth about his cousin’s case. But truth is hard to come by in a town where no one feels safe to speak.

Chasing his ghosts takes Cross all the way down to the sugarcane fields of Florida, where he gets pulled into a case that has local cops needing his kind of expertise: a string of socialite murders with ever more grisly settings. He’s chasing too many loose ends–a brutal killer, the truth about his own past, and justice for his cousin–and any one of the answers might be fatal.

In Cross Justice, Alex Cross confronts the deadliest–and most personal–case of his career. It’s a propulsive, edge-of-your-seat thrill ride that proves you can go home again–but it just might kill you.

The girl who said no to death.

Bibi Blair is a fierce, funny, dauntless young woman—whose doctor says she has one year to live.

An enigmatic woman convinces Bibi that she escaped death so that she can save someone else. Someone named Ashley Bell.

But save her from what, from whom? And who is Ashley Bell? Where is she?

Bibi’s obsession with finding Ashley sends her on the run from threats both mystical and worldly, including a rich and charismatic cult leader with terrifying ambitions.

Here is an eloquent, riveting, brilliantly paced story with an exhilarating heroine and a twisting, ingenious plot filled with staggering surprises. Ashley Bell is a new milestone in literary suspense from the long-acclaimed master.

Ancient Rome was an imposing city even by modern standards, a sprawling imperial metropolis of more than a million inhabitants, a “mixture of luxury and filth, liberty and exploitation, civic pride and murderous civil war” that served as the seat of power for an empire that spanned from Spain to Syria. Yet how did all this emerge from what was once an insignificant village in central Italy? In S.P.Q.R., world-renowned classicist Mary Beard narrates the unprecedented rise of a civilization that even two thousand years later still shapes many of our most fundamental assumptions about power, citizenship, responsibility, political violence, empire, luxury, and beauty.

Like the best detectives, Beard sifts fact from fiction, myth and propaganda from historical record, refusing either simple admiration or blanket condemnation. Far from being frozen in marble, Roman history, she shows, is constantly being revised and rewritten as our knowledge expands. Indeed, our perceptions of ancient Rome have changed dramatically over the last fifty years, and S.P.Q.R., with its nuanced attention to class inequality, democratic struggles, and the lives of entire groups of people omitted from the historical narrative for centuries, promises to shape our view of Roman history for decades to come.

5) Thomas Jefferson and the Tripoli Pirates

This is the little-known story of how a newly indepen­dent nation was challenged by four Muslim powers and what happened when America’s third president decided to stand up to intimidation.

When Thomas Jefferson became president in 1801, America faced a crisis. The new nation was deeply in debt and needed its economy to grow quickly, but its merchant ships were under attack. Pirates from North Africa’s Barbary coast routinely captured American sailors and held them as slaves, demanding ransom and tribute payments far beyond what the new coun­try could afford.

Over the previous fifteen years, as a diplomat and then as secretary of state, Jefferson had tried to work with the Barbary states (Tripoli, Tunis, Algiers, and Morocco). Unfortunately, he found it impossible to negotiate with people who believed their religion jus­tified the plunder and enslavement of non-Muslims. These rogue states would show no mercy—at least not while easy money could be made by extorting the Western powers. So President Jefferson decided to move beyond diplomacy. He sent the U.S. Navy’s new warships and a detachment of Marines to blockade Tripoli—launching the Barbary Wars and beginning America’s journey toward future superpower status.

As they did in their previous bestseller, George Washington’s Secret Six, Kilmeade and Yaeger have transformed a nearly forgotten slice of history into a dramatic story that will keep you turning the pages to find out what happens next. Among the many sus­penseful episodes:

6) How to Catch Santa

After waiting for days and days and days, it’s finally Christmas Eve. And that’s when you can try to catch Santa. . . .

From Jean Reagan and Lee Wildish, creators of the bestselling HOW TO… series, comes a delightful new offering, written again in a hilarious instructional style. Two sibling narrators give clever tips for “catching” Santa (be crafty! be clever! be gentle!) on Christmas Eve.

Filled with humor and holiday warmth, this is a jolly read-aloud for the whole family to enjoy!

7) Notorious RBG: The Life and Times of Ruth Bader Ginsberg

Supreme Court Justice Ruth Bader Ginsburg never asked for fame—she has only tried to make the world a little better and a little freer.

But nearly a half-century into her career, something funny happened to the octogenarian: she won the internet. Across America, people who weren’t even born when Ginsburg first made her name as a feminist pioneer are tattooing themselves with her face, setting her famously searing dissents to music, and making viral videos in tribute.

Notorious RBG, inspired by the Tumblr that amused the Justice herself and brought to you by its founder and an award-winning feminist journalist, is more than just a love letter. It draws on intimate access to Ginsburg’s family members, close friends, colleagues, and clerks, as well an interview with the Justice herself. An original hybrid of reported narrative, annotated dissents, rare archival photos and documents, and illustrations, the book tells a never-before-told story of an unusual and transformative woman who transcends generational divides. As the country struggles with the unfinished business of gender equality and civil rights, Ginsburg stands as a testament to how far we can come with a little chutzpah.

In a major reassessment of African American culture, Phillip Brian Harper intervenes in the ongoing debate about the “proper” depiction of black people. He advocates for African American aesthetic abstractionism—a representational mode whereby an artwork, rather than striving for realist verisimilitude, vigorously asserts its essentially artificial character.  Maintaining that realist representation reaffirms the very social facts that it might have been understood to challenge, Harper contends that abstractionism shows up the actual constructedness of those facts, thereby subjecting them to critical scrutiny and making them amenable to transformation.

Arguing against the need for “positive” representations, Abstractionist Aesthetics displaces realism as the primary mode of African American representational aesthetics, re-centers literature as a principal site of African American cultural politics, and elevates experimental prose within the domain of African American literature. Drawing on examples across a variety of artistic production, including the visual work of Fred Wilson and Kara Walker, the music of Billie Holiday and Cecil Taylor, and the prose and verse writings of Ntozake Shange, Alice Walker, and John Keene, this book poses urgent questions about how racial blackness is made to assume certain social meanings. In the process, African American aesthetics are upended, rendering abstractionism as the most powerful modality for Black representation.

A war is coming, a battle that will stretch from the prehistoric forests of the ancient past to the cutting-edge research labs of today, all to reveal a true mystery buried deep within our DNA, a mystery that will leave readers changed forever . . .

In this groundbreaking masterpiece of ingenuity and intrigue that spans 50,000 years in human history, New York Times bestselling author James Rollins takes us to mankind’s next great leap.

The search for the truth will take Commander Gray Pierce of Sigma Force 50,000 years into the past. As he and Sigma trace the evolution of human intelligence to its true source, they will be plunged into a cataclysmic battle for the future of humanity that stretches across the globe . . . and beyond.

But will it mark a new chapter in our development . . . or our extinction?

10) The Magic Strings of Frankie Presto

Mitch Albom creates his most unforgettable fictional character—Frankie Presto, the greatest guitarist to ever walk the earth—in this magical novel about the bands we join in life and the power of talent to change our lives.

In his most stunning novel yet, the voice of Music narrates the tale of its most beloved disciple, young Frankie Presto, a war orphan raised by a blind music teacher in a small Spanish town. At nine years old, Frankie is sent to America in the bottom of a boat. His only possession is an old guitar and six precious strings.

But Frankie’s talent is touched by the gods, and his amazing journey weaves him through the musical landscape of the 20th century, from classical to jazz to rock and roll, with his stunning talent affecting numerous stars along the way, including Hank Williams, Elvis Presley, Carole King, Wynton Marsalis and even KISS.

Frankie becomes a pop star himself. He makes records. He is adored. But his gift is also his burden, as he realizes, through his music, he can actually affect people’s futures—with one string turning blue whenever a life is altered.

At the height of his popularity, Frankie Presto vanishes. His legend grows. Only decades later, does he reappear—just before his spectacular death—to change one last life.

With its Forest Gump-like romp through the music world, The Magic Strings of Frankie Presto is a classic in the making. A lifelong musician himself, Mitch Albom delivers a remarkable novel, infused with the message that “everyone joins a band in this life” and those connections change us all.