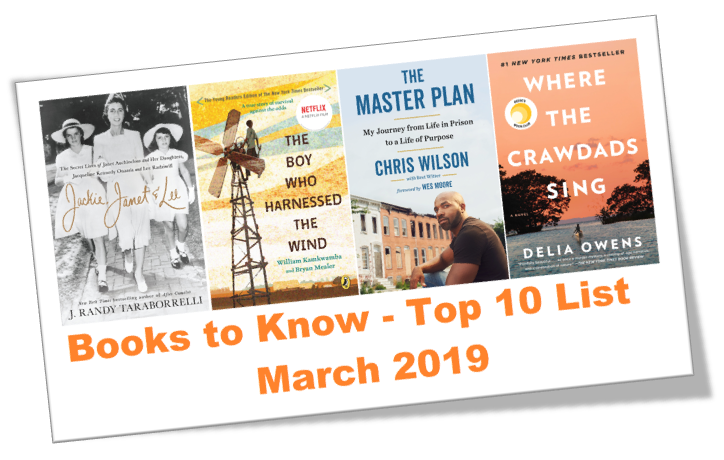 Growing up in a tough Washington, D.C., neighborhood, Chris Wilson was so afraid for his life he wouldn’t leave the house without a gun. One night, defending himself, he killed a man. At eighteen, he was sentenced to life in prison with no hope of parole.

But what should have been the end of his story became the beginning. Deciding to make something of his life, Chris embarked on a journey of self-improvement–reading, working out, learning languages, even starting a business. He wrote his Master Plan: a list of all he expected to accomplish or acquire. He worked his plan every day for years, and in his mid-thirties he did the impossible: he convinced a judge to reduce his sentence and became a free man. Today Chris is a successful social entrepreneur who employs returning citizens; a mentor; and a public speaker. He is the embodiment of second chances, and this is his unforgettable story.

2.)“The Boy who harnessed the wind: Young readers edition”

When a terrible drought struck William Kamkwamba’s tiny village in Malawi, his family lost all of the season’s crops, leaving them with nothing to eat and nothing to sell. William began to explore science books in his village library, looking for a solution. There, he came up with the idea that would change his family’s life forever: he could build a windmill. Made out of scrap metal and old bicycle parts, William’s windmill brought electricity to his home and helped his family pump the water they needed to farm the land.

Retold for a younger audience, this exciting memoir shows how, even in a desperate situation, one boy’s brilliant idea can light up the world. Complete with photographs, illustrations, and an epilogue that will bring readers up to date on William’s story, this is the perfect edition to read and share with the whole family.

3.)“The Threat: How the FBI protects America in the Age of Terror and Trump”

On March 16, 2018, just twenty-six hours before his scheduled retirement from the organization he had served with distinction for more than two decades, Andrew G. McCabe was fired from his position as deputy director of the FBI. President Donald Trump celebrated on Twitter: “Andrew McCabe FIRED, a great day for the hard working men and women of the FBI – A great day for Democracy.”

In The Threat: How the FBI Protects America in the Age of Terror and Trump, Andrew G. McCabe offers a dramatic and candid account of his career, and an impassioned defense of the FBI’s agents, and of the institution’s integrity and independence in protecting America and upholding our Constitution.

A dazzling biography of three of the most glamorous women of the 20th Century: Jacqueline Bouvier Kennedy Onassis, her mother Janet Lee Auchincloss, and her sister, Princess Lee Radziwill.

“Do you know what the secret to happily-ever-after is?” Janet Bouvier Auchincloss would ask her daughters Jackie and Lee during their tea time. “Money and Power,” she would say. It was a lesson neither would ever forget. They followed in their mother’s footsteps after her marriages to the philandering socialite “Black Jack” Bouvier and the fabulously rich Standard Oil heir Hugh D. Auchincloss.

5.)“Where the Crawdads Sing”

For years, rumors of the “Marsh Girl” have haunted Barkley Cove, a quiet town on the North Carolina coast. So in late 1969, when handsome Chase Andrews is found dead, the locals immediately suspect Kya Clark, the so-called Marsh Girl. But Kya is not what they say. Sensitive and intelligent, she has survived for years alone in the marsh that she calls home, finding friends in the gulls and lessons in the sand. Then the time comes when she yearns to be touched and loved. When two young men from town become intrigued by her wild beauty, Kya opens herself to a new life–until the unthinkable happens.

Perfect for fans of Barbara Kingsolver and Karen Russell, Where the Crawdads Sing is at once an exquisite ode to the natural world, a heartbreaking coming-of-age story, and a surprising tale of possible murder. Owens reminds us that we are forever shaped by the children we once were, and that we are all subject to the beautiful and violent secrets that nature keeps.

6.)“Sapiens: A Brief History of Mankind”

From a renowned historian comes a groundbreaking narrative of humanity’s creation and evolution—a #1 international bestseller—that explores the ways in which biology and history have defined us and enhanced our understanding of what it means to be “human.”

One hundred thousand years ago, at least six different species of humans inhabited Earth. Yet today there is only one—homo sapiens. What happened to the others? And what may happen to us?

Most books about the history of humanity pursue either a historical or a biological approach, but Dr. Yuval Noah Harari breaks the mold with this highly original book that begins about 70,000 years ago with the appearance of modern cognition. From examining the role evolving humans have played in the global ecosystem to charting the rise of empires, Sapiens integrates history and science to reconsider accepted narratives, connect past developments with contemporary concerns, and examine specific events within the context of larger ideas.

In Killing Commendatore, a thirty-something portrait painter in Tokyo is abandoned by his wife and finds himself holed up in the mountain home of a famous artist, Tomohiko Amada. When he discovers a previously unseen painting in the attic, he unintentionally opens a circle of mysterious circumstances. To close it, he must complete a journey that involves a mysterious ringing bell, a two-foot-high physical manifestation of an Idea, a dapper businessman who lives across the valley, a precocious thirteen-year-old girl, a Nazi assassination attempt during World War II in Vienna, a pit in the woods behind the artist’s home, and an underworld haunted by Double Metaphors. A tour de force of love and loneliness, war and art—as well as a loving homage to The Great Gatsby—Killing Commendatore is a stunning work of imagination from one of our greatest writers.

8.)“Killers of the Flower Moon”

In the 1920s, the richest people per capita in the world were members of the Osage Nation in Oklahoma. After oil was discovered beneath their land, the Osage rode in chauffeured automobiles, built mansions, and sent their children to study in Europe.

Then, one by one, the Osage began to be killed off. The family of an Osage woman, Mollie Burkhart, became a prime target. One of her relatives was shot. Another was poisoned. And it was just the beginning, as more and more Osage were dying under mysterious circumstances, and many of those who dared to investigate the killings were themselves murdered.

Trauma is a fact of life. Veterans and their families deal with the painful aftermath of combat; one in five Americans has been molested; one in four grew up with alcoholics; one in three couples have engaged in physical violence. Dr. Bessel van der Kolk, one of the world’s foremost experts on trauma, has spent over three decades working with survivors. In The Body Keeps the Score, he uses recent scientific advances to show how trauma literally reshapes both body and brain, compromising sufferers’ capacities for pleasure, engagement, self-control, and trust. He explores innovative treatments—from neurofeedback and meditation to sports, drama, and yoga—that offer new paths to recovery by activating the brain’s natural neuroplasticity. Based on Dr. van der Kolk’s own research and that of other leading specialists, The Body Keeps the Score exposes the tremendous power of our relationships both to hurt and to heal—and offers new hope for reclaiming lives.

In the early 1900s, teenaged Sunja, the adored daughter of a crippled fisherman, falls for a wealthy stranger at the seashore near her home in Korea. He promises her the world, but when she discovers she is pregnant–and that her lover is married–she refuses to be bought. Instead, she accepts an offer of marriage from a gentle, sickly minister passing through on his way to Japan. But her decision to abandon her home, and to reject her son’s powerful father, sets off a dramatic saga that will echo down through the generations.

Richly told and profoundly moving, Pachinko is a story of love, sacrifice, ambition, and loyalty. From bustling street markets to the halls of Japan’s finest universities to the pachinko parlors of the criminal underworld, Lee’s complex and passionate characters–strong, stubborn women, devoted sisters and sons, fathers shaken by moral crisis–survive and thrive against the indifferent arc of history.