You are at:Home»Media»DC Elections: A Night to Remember for Democrats
Tweet

(*Photos courtesy of Rachel Lincoln/DC Spotlight)  Above:  DC Congresswoman Eleanor Holmes Norton and Wendy Thompson (Right) discuss the future of the District under a new Republican-led House of Representatives. 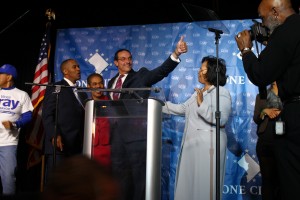 On an evening that left Democrats around the nation with little to cheer about, the mood at the Love Nightclub on Okie Street on election night was festive and celebratory.  The club hosted the District’s most prominent local political leaders – Mayor-elect Vince Gray, Council Chairman-elect Kwame Brown, and re-elected Delegate Eleanor Holmes Norton – as they each claimed victories in Tuesday’s vote.

The evening began slowly as news trickled in from the East Coast and then the remainder of the country.  The nightmare that had been widely predicted for Democrats was coming to pass.  Republican congressional gains were extensive.  However, as attention turned local, spirits picked up.  Indeed, the next two years in the District would be guided by newly elected Democrats, including a new mayor.  While some other results, such as the victories of Chris Coons (D-DE) in the Senate and Governor Martin O’Malley (D-MD), garnered applause as they 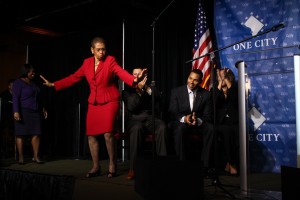 came across the club’s numerous television screens, it was the landslide wins by Gray, Brown and Norton that caused the greatest excitement and cheers from the crowd.

Congresswoman Norton, burst onto the stage with her trademarked energy and spoke briefly, thanking the voters and her staff for their support and promising to continue to fight for DC voting rights.  “I want you to send that message back to whatever kind of House or Senate they give us. “One City” is ready for whatever they’re gonna throw at us…This is one city who will never give up until we have statehood and voting rights for the District of Columbia.”  During a conversation prior to her onstage appearance, Norton was quick to refute the notion that this election was a referendum on President Barack Obama.  “It’s not Barack Obama; it’s the economy.  It’s the recession and Democrats are paying the price for a recession they had nothing to do with.” 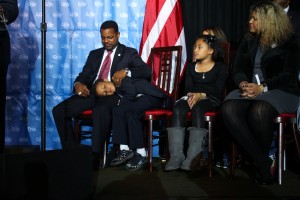 She further stated that she would work with whomever the voters sent to Congress — as she always had — and that she has had considerable success in the past working with a Republican-led House of Representatives.  Norton seemed encouraged, despite the dismal results for Democrats, recalling that she was just as effective during the Democrats’ stint in the minority during the 1990s.  She noted that she was able to work with several Republicans in passing legislation, even Newt Gingrich. “I’m very strategic about the way I run the District…I was able to represent the District quite well when I spent 12 years in the minority.  Nobody thought that Newt Gingrich would be my ally…I’ve got a lot of work to do, but I got my running shoes on from when I was in the minority before, so I think I know how to do this one,” she said.

Brown then took to the stage and thanked his staff, family and supporters at length with special gratitude to his fellow 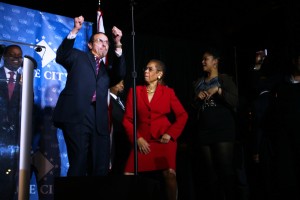 council members.  Mayor-elect Gray, the final speaker, promised to deliver on his “One City” goals of improving the District’s economic standing and moving the schools forward and not backwards.  As the night closed, Gray took to the dance floor, swaying and mingling to the sounds of Shalimar’s “A Night to Remember”.  For the new mayor, who prevailed in one of the District’s most controversial and heated primary elections, the evening of November 2th was truly a night to remember.