You are at:Home»In the Spotlight w/ Wendy Thompson»Top 10 List of the Most Interesting People (VIDEO) – Running for mayor: The house that Jack Evans built in D.C.
Tweet 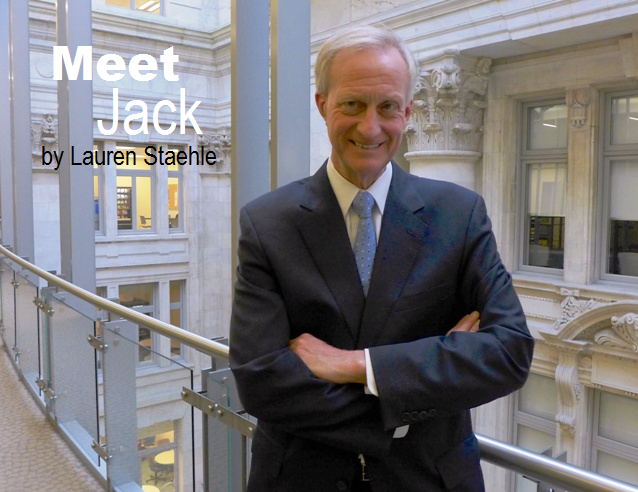 People see me in the public arena, but they don’t necessarily see me as a dad. I am the father of triplets and my wife passed away when my children were six. So essentially, until I got remarried recently, I raised three children by myself. Having raised three children, I know about the school system and how children operate in school and the support they need…I think that’s something that people need to know about me, that there is a human side that is involved in this, and because of that, it makes me a better leader.
— Jack Evans, candidate for mayor of D.C.

D.C. Council member and mayoral candidate Jack Evans has been serving the Washington, D.C. community for over 20 years, helping to 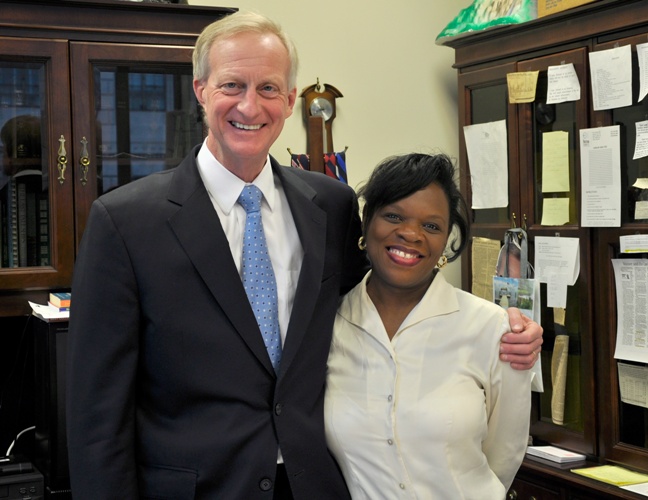 advance the city toward a more safe, financially secure, and promising place for current and future residents. His decision to run in the 2014 mayoral race reflects an innate desire for leadership, and a commitment to his fellow Washingtonians that goes far beyond the typical call of duty. “I’ve always loved politics,” Evans said. “I went to law school and moved back to Washington in 1978, and immediately became involved in the politics on a very local level. I’ve always aspired to a leadership role, and in this city, mayor is the leadership role.”

Evans has experienced both the struggle and the prosperity of D.C., making his vow to continue on this path of growth one that the people can count on. “When I first came on the council back in 1991, the city was really struggling, and by 1995, we were in such dire straights that a control board was put in place to run the city,” Evans said. “I would say from around 1998 on, I was part of the resurgence of the city, working closely with Mayor Williams and Chairman Linda Cropp and others. We have now taken a city, which again, was in dire straights, to being the most vibrant, exciting city in America.” 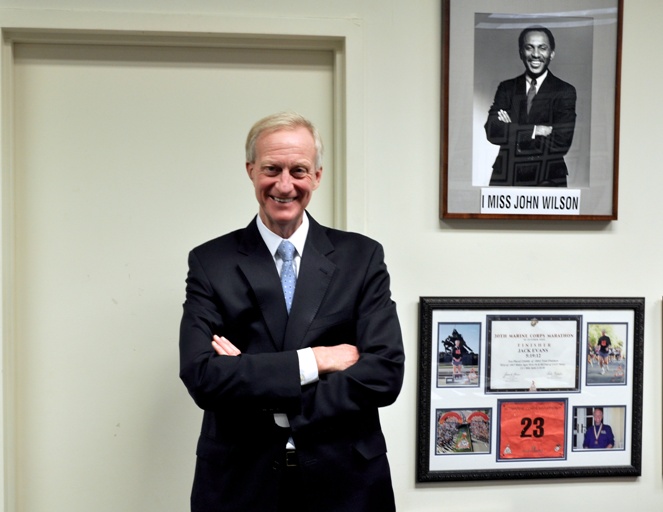 stability. “Our finances are very strong. We have $1.5 billion in the bank, balanced budgets now for 16 straight years, no unfunded pension liability, development that is the envy of every city around the country,” Evans said.

With the city on the right path, Evans says that saving the surplus of money is crucial. “It’s very important to have a large sum of money to back up the borrowing that we do, and to have in case situations arise. Most recent was when we had the government shutdown, and we had to spend our own money to keep the District government open. What we need to do is to make sure that the prosperity that the city is now enjoying is enjoyed by everyone,” Evans added. “We as a government have a responsibility to work with the private sector to create jobs, something I’ve done very successfully on the council.”

Evans was crucial in the development of the future Washington Convention Center Hotel, which he says will bring 600 jobs to District residents. “That’s the kind of approach I want to take as mayor,” Evans said.

Evans also has a passionate commitment to the growth of Washington schools, and he recognizes the hard work being done by city officials, like 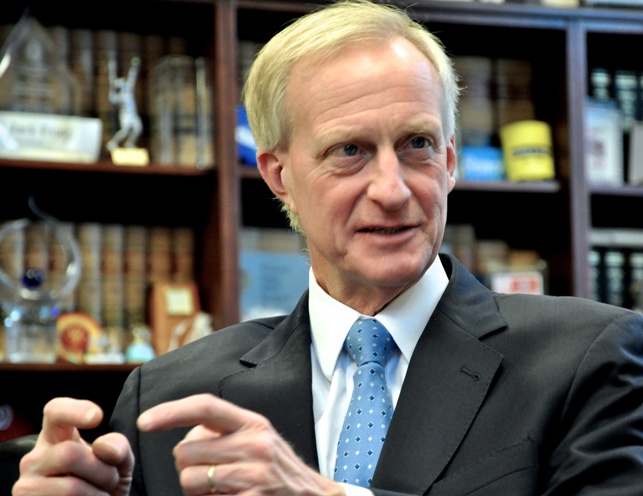 Chancellor Kaya Henderson. “As mayor, I would keep her as school chancellor. I would work with her to continue the reforms that are being done. I believe we are on the right track, and we need to continue to create the environment where every child in the city gets a quality education. We started with renovating the buildings, and I was the architect who started the funding for this whole modernization piece, which has led us to have probably the finest infrastructure for a public school system in America. Now we have to get to the next step, with making sure that the programs that are in those schools, the teachers, the principles, the curriculum, provide our children with the quality education that they’re going to need to compete in the environment in which we are living.”

Crime is one of Evans’ prime concerns – keeping crime down, as the city has a record low crime rate this year. Evans credits Police Chief Cathy Lanier among others, with helping to reduce the crime rate by a significant amount. As mayor, Evans says he will keep Police Chief Lanier on and put her on his staff.

“In 1993, we were the murder capitol of the country,” Evans pointed out. “Last year, we had the lowest number of homicides in this city in the last 52 years.” He credits her unique style of working closely with community, instead of the authoritative, aggressive approach. “She is doing a great job. She took a new style of policing. It wasn’t the confrontational style; it was more the officer friendly style, where officers began to engage the community and bring them in to participate. Her own personality lends itself to doing that, and so we we’ve got a lot more community buy in.”

Crime is not something Evans plans to leave in the hands of others, however. “We still have too many communities, too many areas of our city that are not safe. As the next mayor, I’ll work with the chief to bring the resources to bear so that every neighborhood is a safe neighborhood.”

Many of the neighborhoods in the District are inundated with homeless men, women and children living on frigid streets, in abandoned buildings and in overcrowded homeless shelters. A report recently found that the converted D.C. General Hospital — which is currently a homeless shelter — houses over 400 homeless children. “What we’re trying to do is create enough affordable housing to get people out of the [shelters]and into permanent housing,” Evans said. “What our city has to do is step up the pace on this. But the goal is to make sure that we never ever have children living in a homeless facility.”

Despite the positive growth and decrease in crime, the District has a negative reputation as a city with political leaders who lack ethics and integrity. Some have characterized the climate as a crisis of ethics, which has led to convictions and imprisonment of several council members. In recent years, with the removal of Councilmen Kwame Brown, Michael Brown, and Harry Thomas, Jr., due to illegal and unethical activities, Evans says he has remained above the fray by maintaining the same core values and ethics that he began with over 20 years ago. “I’m here to serve the people,” Evans said. “That’s what I was elected to do, and that’s what I continue to do. Not to benefit myself personally. If I wanted to do that, I would stay in the private sector and earn whatever I can earn. But if you’re going to be in the public arena, you’re here to serve, and I think some of my colleagues lost sight of that…essentially they stole money is what it comes down to, and there’s really no place for that.”

Regarding the controversial traffic cameras, which have greatly contributed to the city’s income surplus, due to high ticket fees, Evans says, a $250 ticket can be exorbitant for working families. “$250 is a lot of money. That hurts. That’s a utility bill,” he says. “We get a lot of complaints about them, because there is an element of gotcha in the traffic cameras, and what I would try to do as mayor is number one: Eliminate the element of gotcha…I think there is a balance between trying to regulate traffic and keep the speeds down, verses putting a camera where obviously you’re going to catch people.”

Evans is also a dedicated father, and his home life gives him a unique perspective on the situations of District families. “People see me in the public arena, but they don’t necessarily see me as a dad. I am the father of triplets and my wife passed away when my children were six. So essentially, until I got remarried recently, I raised three children by myself. Having raised three children, I know about the school system and how children operate in school and the support they need. And outside the school, just in raising children, and like the old adage, ‘you’re only as happy as you’re least happy child’. And if you have children in school, how important it is just to show up” for them.

Evans says he can relate to the single mothers in the city, because that was his reality as a single widowed father for many years. “When I look back on those years, I wouldn’t trade them for anything. There wasn’t a meeting I missed or an event I didn’t go to that [surpassed]the time I got to spend with my children. I think that’s something that people need to know about me, that there is a human side that is involved in this, and because of that, it makes me a better leader.”

Jack Evans is running for mayor of Washington, D.C.  For more information: http://www.jackevansfordc.com