On a rainy, cold night in late October, under the dark shadows of the U. S. Capitol Building lies “Janet,” a 41-year-old woman and her service dog, Kilo, asleep on the wet concrete in front of the homeless shelter Open Doors.  The fall chill is beginning to set in as winter approaches, but the harsh realities of life for Janet and other homeless women in Washington, D.C. can be more brutal than a night outside as the temperature dips below freezing. 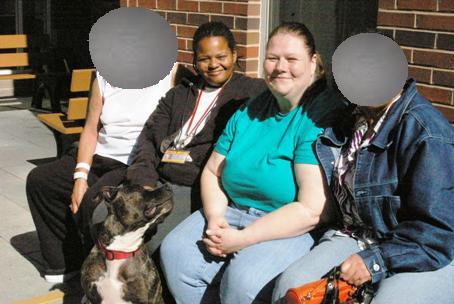 Earlier in the night, Janet stood in the doorway of Open Doors begging for a bed or floor to sleep on to escape the rain, but was turned away and forced to sleep on the cold sidewalk with her dog.     There are only a few rules at Open Door Shelter, a facility for homeless women in Northwest Washington, D.C.  The foremost requires that all residents must be out of the shelter by 7 a.m.—rain or shine—and are forbidden to return until after 4 p.m., at which time they are allowed to wash their clothes, eat, bathe and spend the night.

The second notable rule is that residents who fail to return by 9 p.m. in the evening will lose their bed to another person, will be placed out on the street and must wait until another bed is available before he or she is allowed back into the shelter. There are 108 beds at Open Door and for the residents that abide by the rules, they are able to continue living there.  Several women who reside at Open Doors have broken their silence and are willing to risk possible retaliations to shed light on what they describe as horrible conditions at the shelter.

Janet arrived at Open Door in November of 2010 after becoming homeless following the death of her mother. She came with only a suitcase of clothes and was accompanied by Kilo, her black and white pit bull that has been labeled and documented as a service animal by her doctor. Kilo provides emotional support and mobility for Janet, and the two were given a cubical with a bed in Open Door.

For Janet and the other women residing at the homeless shelter, the living conditions and food provided is hard to stomach, even for those who have experienced homelessness over several years.  However, there is nowhere else to go, so they tolerate the conditions, but find the will and courage to speak out so that changes might occur.

“Candice,” a soft-spoken, young woman who suffers from bipolar disorder says she became homeless after she was put out of her boyfriend’s home.  She came to Open Doors seeking shelter and help on her case in order to find employment, but regrets having made that choice.  “The bugs are not nice. I’ve been bitten several times,” she admits. “The roaches, I mean there was one night I killed six probably in about an hour. It’s just nasty conditions.”

The food at the shelter has been given several colorful and deplorable descriptions by the women who agree that it’s primarily “slop” or as “Kim” describes it: “catfish gumbo that looks like a green mess. They served us fish with cabbage and tomatoes as a stew,” she says.  She concluded that most of the good food and donations are never actually given to the homeless residents.  “I’ve seen donations come in and we don’t see them.  We don’t get them,” Kim admits.  “Or we’ll get half of what has come in the door.  Clothes…cases of water dropped off and we ended up getting one case.  Coffee is dropped off; we don’t get that coffee.”

“Some of the food at Open Doors, I wouldn’t even feed an animal,” adds “Carol,” 56, who also lives at Open Door. “I mean it’s very poor. If it wasn’t for the churches coming in and donating and giving us nourishment food, I would have to go out and buy it. That’s with anybody that are in the same situation I am. If they don’t have food stamps, I don’t know how they’re even surviving besides going church to church and hoping they can get a meal before there is none.” When the women shower, they must be finished by 10 p.m., because the lights go out at that time. For those who are still in the shower after 10 p.m., management at Open Doors locks the bathrooms.

For Janet, her situation is even grimmer, as she has her companion Kilo to take care of in addition to herself. “I suffer with anxiety, depression, asthma [and]I’ve had back surgery [and]that’s why I have [Kilo] for my mobility,” Janet says. “He helps me stay balanced when I’m walking.  It’s like he’s holding me up. I don’t deal well with stress.”  Janet adds, “Everybody knows Kilo. Nobody’s scared of him except the new [residents]that come in and don’t know him.”

Janet and Kilo’s stay at Open Door was peaceful until a series of incidents occurred starting in the summer between the shelter and the two residents. The first occurred when Kilo cut his paw on glass scattered about the shelter. Janet accrued $1,500 in medical bills to pay for his treatment, which included staples and continuous trips to the veterinarian to have his wound cleaned and his bandages changed. His injury also required 18 days of bed rest, for which Open Door would not oblige.

“They told me we can’t accommodate no dog for no bed rest,” Janet says bitterly. “My dog is like my child and because you’re mean, [because of ]hatred you’re going to let my dog go outside in the hot sun with a messed up foot. He can’t walk. So I was without my services because I wasn’t going to leave him with anyone because we have separation issues.”

This was followed by another incident in which Open Door placed rat poison down in the area where Kilo used the bathroom without posting a sign warning of the danger. As a result, Kilo came in contact with the poison and fell ill, leading to another emergency trip for Janet and her service dog.

“I feel that [Open Door] was negligent,” says Janet. “I feel that it was very vindictive.”

It wasn’t until Janet’s overnight hospital stay in October 2011 that her relationship with the shelter fully deteriorated. By rule, residents who fail to return to the shelter by 9 p.m. will lose their bed to another occupant unless they notify the shelter via phone that they won’t be returning that night due to health reasons.

“What happened was, the way my phone was set up, I can only text,” Janet says. “So I text messaged another young lady that stays at the shelter and she went to [Open Door] and told them that I was at the hospital getting a procedure done and if I didn’t get in that night I would have documentation when I went back in [the next day]. So when I went in with my paperwork they told me ‘oh well’ I should have called and that they don’t have any beds.”

“They threw my suitcase and my can goods away which had my food and my dog’s food in it,” continues Janet, who kept her can goods in a rolling suitcase because she had so many. “They could have donated the can goods to a church drive. Don’t just tell me, you know, we threw them away, you should have took them with you.”

The shelter refers to the process of putting a resident out onto the street as “downsizing.” According to Janet, she was targeted specifically by the shelter for “downsizing,” noting that Open Door realized that they could use Janet’s hospital visit as an opportunity to remove Kilo from the facility. The two spent the night outside and returned the next day in an effort to get a new bed.

On the third day following her eviction, it rained and the shelter still denied Janet a bed.  She remembers asking for shelter, and according to Janet, the manager of Open Door, Nakita Wilson, refused Janet a place to sleep, telling Janet to wait outside. Minutes later, another woman was allowed into the facility and given a bed.

“I slept outside in the rain,” says Janet. “It was raining hard and they told me [there was]no beds and a young lady got a bed.”

Unfair treatment from Open Door was also experienced by “Carol.” Carol was denied a bed for five days before she was allowed entrance into the shelter. Meanwhile, other people who arrived while Carol was waiting were given a bed and food. She says Open Door appeared to be more like an exclusive night club than a church-affiliated homeless shelter.

““The one thing I wish for the shelters is to have better people, [a]better management team to run the shelters than what we have now,” said Kim. “People who care about who they’re helping and why they’re there.”

Kim sometimes works 80 hours in order to pay off the enormous medical bills she accrued, which caused her to lose her home in Arlington and left her homeless.  Despite her circumstances, she says she deserves better and that everyone wants “to be able to feel safe when you lay your head down.”

When Candice was asked how she would describe homeless to someone who is not homeless, was most poignant with her delicately chosen words:  “We’re not all dirty nasty people.  We are human just like everybody else.  We’re just down on our luck.  Plain and simple.”

“Waiting for an opportunity?” asks the reporter.

“Exactly,” replies Candice, as she chokes back tears.