You are at:Home»Features»Bon Appetit»Cuba Libre Restaurant: A Cool, Caribbean Escape – In Chinatown
Tweet 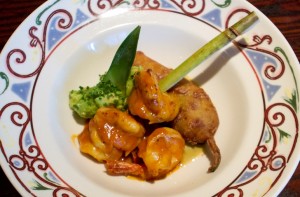 On a sweltering day in the District with the feel of a Caribbean heat wave, stepping into the cool, calm, yet lively Cuba Libre is like taking a mini-vacation.  The banner-clad exterior of the Cuban-Fusion restaurant and rum bar at the corner of 9th and H Street in Chinatown isunmistakable.  Well-lit signs on the building’s corner echo the 1950s Vegas-Havana feel found inside, with dimly lit décor that stops well short of Disneyesque tackiness to create a background of a swingin’ island port city.  The colonial-era architecture of Havana is effectively recreated, and the low lightingprevents the scenery from stealing the show.  The food and the drinks will take care of that.

Bar manager McGarrit Franco offers a range of cocktails which will require multiple visits to peruse.  In addition to a fine assortment of bottled beer and a wine list with dozens of selections from throughout the Spanish-speaking world (plus Virginia’s Whitehall Viognier), there are Sangrías, an extensive, impressive rum selection, Mojitos, Caipirinhas and over a dozen distinctive cocktails on the menu.  The Mojitos range from the classic (rum, lime juice, soda, mint and guarapo – juice extracted from sugar cane) to the exotic (cucumber, blueberry, or rhubarb & guava).  The Pyrat XO Mojito, made with the rum of the same name, is a classic in overdrive, smooth and impressive.

The Grilled Pineapple Mojito packs the punch of the standard Mojito, but shades it with a sweet purée of its namesake.  The Caipirinha list is equally intriguing.  Most varieties are made in the traditional manner with Cachaça, the Brazilian “Rum” derived from guarapo.  There are also those made with vodka (the “Caipiroska”) and Sake (the “Sakerinha”).  The cocktail list also includes the dark, fruity Guantanamo Bay and the pleasantly sour Papa Doble – named for former Cuba frequenter “Papa” Hemingway.  There are also well-executed standards like the Dark & Stormy and the Mai-Tai, all tapping into Cuba Libre’s broad rum selection. 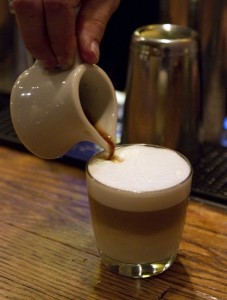 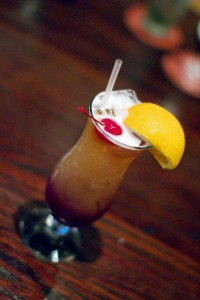 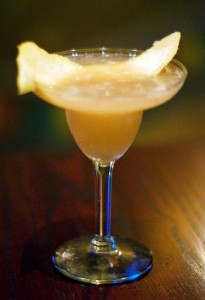 When the beverages have been thoroughly scrutinized and enjoyed, an imaginative assortment of Latin-themed cuisine awaits.  Options for starters include Cuban/Caribbean standards like Tostones (twice-fried plantains) and Frituras de Malanga (Taro-root fritters served with tamarind ketchup).  There are variations such as the Guacamole Cubano (Guacamole with pineapple – a pleasing twist), and there are unusual gems like the Buñuelos de Espinaca.  Who knew a crispy ball of molten spinach could be so good?  These small spinach cheese puffs served with manchego cheese and a goat cheese and ranch sauce is almost good enough to forego a main course.  But that wouldbe a great mistake. 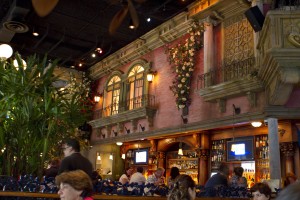 The list of entrees (“Platos Fuertes”) is divided into “new” and “classic” (“Nuevos” y “Clásicos”), but both offer modern takes on Latin and Caribbean standards.  There is something for every taste, including two fully vegetarian dishes: the Afro-Caribbean Bacán de Plátanos – a stew of okra, cauliflower and coconut milk with a plantain tamale wrapped in banana leaf – and Ravioles de Calabaza – pasta filled with squash, goat cheese and Mascarpone cheese, in a sauce of sherry vinegar with pearl onions, baby spinach and pumpkin seeds.

These offerings, like all the dinner dishes, are presented appealingly and are deceptively substantial.  Among the “classic” dishes, the Léchon Asado stands out as a complex blend of flavors and textures.  The pulled pork (“Léchon”) hides beneath a nest of “Vigorón” slaw – a mayo-free mix of cabbage with slivers of Jalapeño, which provide a satisfying spark.  It rests upon a hearty yucca purée, with an orange mojo sauce and black bean broth.  The combination of largely traditional components has a distinctly “fusion” sensibility. 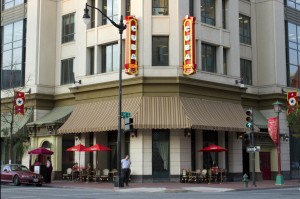 Camarones con Caña are among the “new” offerings which also marry traditional fare with modern elements.  Several substantial pan-seared shrimp, cooked in a subtle mango BBQ glaze, accompany a pepper stuffed with a creamy mix of quinoa grain, sweet potato and Mascarpone.  The slight tang of the shrimp contrasts nicely with the smooth pepper filling, and a dose of Guacamole Cubano compliments both flavors.  It is garnished with a stick of sugar cane.

A variety of desserts are available to round out the evening.  In addition to several interpretations of traditional Latin desserts, such as Tres Leches and an excellent, smooth Tocino del Cielo (Cuban flan), there is also the signature dessert: the Torta Mentirita.  It is described as a Cuba Libre Rum & Coke in dessert form.  It is a rum-soaked cake served with lime sorbet and a Coca-Cola® reduction; its hint of coconut coupled with the sharpness of the sauce make for a fine finish to an exceptional meal.

The atmosphere in Cuba Libre is both festive and romantic with floral themes and Latin music echoing through the soft-lit dining room.  Fans of Salsa, Merengue and other regional dance music can stay late to enjoy DJ sets on Fridays and Saturdays.  The “Brunch Without Borders” (all you can eat for $25) offers yet another dimension to the restaurant.

One of four Cuba Libre restaurants spanning the East Coast (Orlando, Philadelphia, and Atlantic City house the others), Washington, DC’s version has been around for nearly a year and has enjoyed a growing reputation.  The restaurants are the creation of chef and restaurateur Guillermo Pernot, and DC’s executive chef Jason Kaufman has obviously made great efforts to grow the brand.  With inviting ambience, intriguing cuisine and an astounding array of outstanding cocktails, Cuba Libre will provide a memorable night out.

BAR
Open until 2 am on weekends