You are at:Home»Features»The Nation»Desperately searching: For a job and the American dream
Tweet 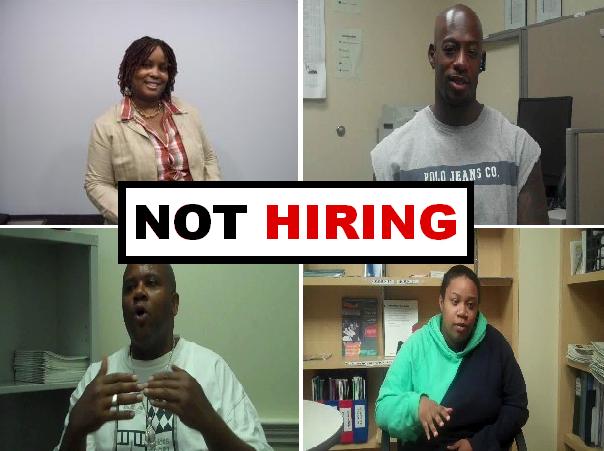 “I have to survive.”

— Terri Fletcher, regarding her use of food stamps to purchase groceries.

“I job search every day. I worked [in]DC government back in 1996, then went to Washington Hospital Center. Since then I’ve been at a standstill.” Terri Fletcher is 43 years old and unemployed in the District of Columbia metropolitan area. After having been laid off from her executive assistant job, Fletcher took “temporary assignments” doing administrative work.  In June of 2010, she says, “they just stopped. I haven’t had any assignments since then. It’s been a whole year.” She adds “I’m a single mom. I have a sixteen year old daughter. It’s pretty hard.”

Last month in June, the unemployment rate increased in 28 states and the District of Columbia, according to a report released by the U.S. Labor Department. In the District, unemployment rose to 10.4 percent, higher than the national rate, which is at 9.2 percent. Maryland’s rate rose to 7 percent, while Virginia’s rate was 6 percent. Some critics argue that the new findings reflect a weaker economy affected by increased gas prices, lower factory output and slow hiring.  Undoubtedly, the report raises the questions over how fast the U.S. economy is recovering.

Responding to the economy, some businesses have opted to hire contingent or part-time workers in order to avoid long-term commitments and save money. Prior to her unemployment, Fletcher had “over 15 temporary assignments in different corporations and non-profits.” She had also taken short-term contracting jobs hoping they would lead to permanent work. The fact that she has not landed a full-time position still surprises her. “I’ve been working ever since I got out of high school,” she exclaims.

When asked if the unemployment situation is improving she quickly states: “I’m still unemployed.” She mentions that a number of her friends and relatives are also unemployed.

On a tight budget, Fletcher supports her family with the monthly check she receives from her divorce settlement. “I live with my mother, daughter and grandson. My mother, she’s struggling herself. She’s on a fixed income. She worked 20 years in DC public schools. She’s doing the best she can to stay afloat.”

Fletcher once owned three cars. After losing her job, the cars were repossessed. She’s adjusted to public transportation, but points out that it presents challenges for her daughter when she takes her son to school. Initially, Fletcher is reluctant to admit she utilizes food stamps, but then asserts, “I have to survive.”

Although she continues seeking full-time employment, Fletcher confides that a lack of response from potential employers is discouraging and depressing. “I can’t get out of bed sometimes – it takes a lot out of me,” she laments.  “Today, I only had a dollar on my fare card. I don’t know how I got back home, but I got home.”

“This is my spot,” Fletcher says regarding the District of Columbia Employment Services South Capitol One-Stop Employment Center, which offers career counseling, classroom and on-the-job training and an array of other services. Neville Waters, the Director of Communications for DOES (Department of Employment Services) states: “DOES is making an assertive effort to align D.C. residents’ skills with jobs as they become available. In some cases that means focusing on work readiness, basic literacy skills and more robust occupational training.”

Upon entering the center, well beyond the computer room, one notices the CVS department, its aisle of gift cards and toiletries. A unique partnership between DOES and CVS has created the CVS Pharmacy and Photo Lab Apprenticeship Program. However, an employee stresses that services are geared towards “assisting” individuals, and not necessarily “finding” them employment, highlighting the fact that job-seekers must take the initiative when trying to land a job.  This reality often escapes some individuals.

Fletcher continually looks for opportunities, submits applications and visits the center to utilize its computers and fax machine. She has landed two interviews and has yet to be awarded a job. Her sister has been a huge support, allowing Fletcher to borrow her car and helping in the job search. Recently, Fletcher attended a job fair at George Washington University. “I got some leads from Howard University and Trinity,” she says and adds, “My hope is to get a job – security, that’s what I want.”

Like Fletcher, Jeffrey Tibbs is also a job-seeker. When Tibbs arrived to the Virginia Employment Commission, it had been a day since he was terminated on his last job. Originally from Alexandria, Tibbs worked in the customer delivery department at Carquest Auto Parts for two years. After a dispute with a coworker, he believes his employment was terminated due to favoritism in the workplace, coupled with the fact that his coworker had seniority.

This is the second time in five years that Tibbs has been unemployed.  Regarding his work at Fed Ex, Tibbs says, “I was laid off because of the economy back in ’09.” For the past couple of years, he has worked to rebuild what he had lost during his first stint with unemployment. Fortunately, he has money put away in savings that was originally designated for the purchase of a home.

Unlike Fletcher, Tibbs receives little support from his family.  He boasts that he is “unafraid of the challenges” he faces again, but confides, “It gets harder as you get older. In the world of employment, they’re going to choose the younger person, because their minds are more vibrant.”  Tibbs, who is 45, may have a point. In June, the U.S. Bureau of Labor Statistics found that the unemployment rate for individuals over 45 rose to 6.9 percent, mirroring its average in the summers of 2010 and 2009.

Waters, from DOES, insists, “The employment situation in the D.C. metropolitan area is reflective of what’s taking place in the nation. Those facing challenges prior to the economic downturn now must compete with a labor pool of more skilled individuals as well as those job-seekers with longer attachments to the labor market.”

A growing number of unemployed individuals are college graduates like Ebony Smith, who recently graduated with a degree in communications.  For the past three months, she has had no job prospects. As a result, Smith says, “I moved back with my parents. This area is known for a bit higher rent. It makes it easier.” Hoping to work with a non-profit, she frequents the Arlington County One-Stop Employment Center and notes that “they set you up with a pre-screening counselor. They help you figure out what steps you need to take as soon as you get in here.” She sees the economy improving, but stresses that its “growing” slowly; many of her friends — also recent graduates — are unemployed.

Johnny Mathis, an Arlington resident who also visits the AEC, has been job searching for two months, having recently been released from the penitentiary. After 14 years, he’s eager to put his life back together. He has a GED and has taken “a series of courses from anger management to self discovery, [and]development.” He rises habitually at 6AM, dedicating at least four hours a day to applying for jobs. AEC has been a good source of support for him. “They have open job fairs quite often here, and I participate in those,” he says. Despite this and the fact that he’s gone on a “series” of interviews, finding employment has been an uphill battle. “What’s holding me back is my conviction,” he says and adds, “which is something I did to myself.” He wants to secure a personal trainer position and work one-on-one with people. Although he still has to get acquainted with the technological advances in today’s world, he’s still shooting for “the American dream. Big house. White picket fence. Two car garage. Three-and-half kids. A dog.”

It seems that every unemployed individual has a different story, a different set of circumstances, and yet Fletcher, Tibbs, Smith and Mathis all share a lot in common. They are all job-seekers and are still searching for economic security – a big chunk of the great American dream.

(Copyright 2011 DC Spotlight Newspaper. All rights reserved. This material may not be published, broadcast, rewritten or redistributed.)