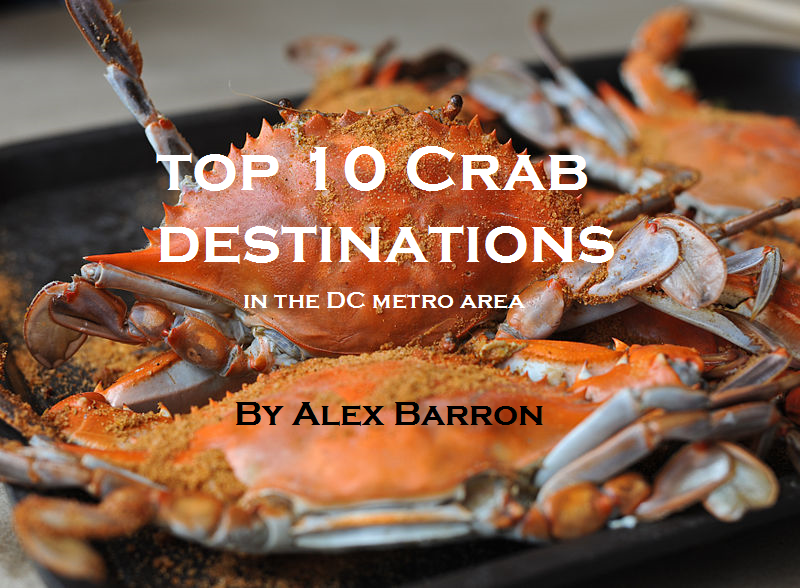 Summer in the mid-Atlantic region has always been synonymous with crabs. Many locals believe that the season only begins once the newspaper is on the table, the Old Bay and the nutcracker are at the ready, and the crustaceans are in the pot. While crabs have always been more associated with Baltimore, Annapolis and the Eastern Shore than with D.C., top notch crab feasts and crab cakes are still very accessible to Washingtonians. Some of the very best of each are only a short drive away. Here are a few of the top spots within an hour’s drive of the capital.

Maine Avenue Seafood Market
It’s hard to believe that many District residents are unaware of this old fashioned seafood market, which looks like it belongs in Easton or St. Michael’s, rather than southwest D.C. It’s a rather obscure location on the Potomac, a few blocks from L’Enfant Plaza – tends to keep it out of the public eye – but its stalls offer up some of the freshest crabs around, either raw or steamed. The sign for the center establishment – Captain White Seafood City – is an underrated Washington icon.

Steamers
The best of several Bethesda seafood destinations, Steamers is a large, festive establishment known for its shrimp, oysters and naturally, its crab feast. On summer evenings, the long porch, covered by a red awning, is the place to be. Bethesda Crab House, which only serves crabs and shrimp, is a fine alternative.

Freddy’s
Freddy’s, a more recent addition to the older area of town, specializes in lobster, but also serves up a meaty, satisfying crab roll.

The Dancing Crab
If the best crabs are often found in the most unassuming places, then this Tenleytown bar certainly looks promising. In an area that often attracts a transient population, this unpretentious spot serves up a satisfying crab feast, and has one of the neighborhood’s best bars to boot.

Seaside Restaurant
Who knew that such a great crab feast could be found practically in the shadow of BWI airport? Seaside Restaurant is an old school spot whose walls are festooned with lobster traps and nautically themed paintings. In other words, it’s the ideal place to order up a half dozen of crabs and a Natty Boh or two.

G&M Restaurant
Further up 95, in the Baltimore suburb of Linthicum, stands this local institution, a no-frills room with one of the best crab cakes anywhere. Perhaps even better is the stuffed shrimp (stuffed with succulent crab meat, of course). On Sundays, the hordes show up in their finest Orioles and Ravens attire.

Pappas
Located in the northeast suburb of Parkville, Pappas is northern Baltimore’s answer to G&M – a spartan dining hall frequented by whole families of crustacean lovers for years. Pappas is home to one of the biggest crab cakes in the land, but the creamy seafood bisque is a hidden gem.

Faidley’s
Baltimoreans have been known to come to blows arguing about crab cakes, but it is hard to have a conversation about seafood in the mid-Atlantic without including this venerable establishment, which started up in 1886. Crab cakes here have a slightly mustardy flavor, and are about as rich as they get. They are best enjoyed at one of Faidley’s several standing tables, although the raw bar in the middle of the room will work in a pinch.

Boatyard Bar & Grill
The Boatyard, located on a peninsula south of Annapolis’ main downtown area, has one of the best crab cakes in town, as well as some great oysters, fish tacos, steamed shrimp, and a fun and festive bar atmosphere. The décor, much of which pays homage to Key West, is enough to warm up even those who wander in during the cold winter months.

The Narrows
There aren’t many restaurants that feel more “Maryland” than this scenic hall just off Route 50, on the western edge of the Eastern Shore. More upscale than crab houses like Seaside or G&M, this casually elegant dining room pairs its hearty crab cakes with majestic views of the Chesapeake Bay.