You are at:Home»Featured»IN THE SPOTLIGHT WITH WENDY THOMPSON (VIDEO) Ted Leonsis: On top of the sports world and extremely “happy”
Tweet

Republished from December 3, 2010
Ceci Ferrara
Sports Writer
In the Spotlight with Wendy Thompson

While having been a prominent figure in the communications and marketing arena for some time now, it is only recently that Ted Leonsis has become a recognized name in professional sports.  Monumental Sports & Entertainment Group, of which he is the founder, majority owner, chairman and CEO, became owner of the NBA’s Washington Wizards, the NHL’s Washington Capitals and the WNBA’s Washington Mystics in June 2010.  Since then, Leonsis has successfully become the “new” type of owner, honoring transparency and fan input, most noticeably through his public blog, Ted’s Take.  In Leonsis case, “success” is the operative word, but happiness is the premier factor in true success. 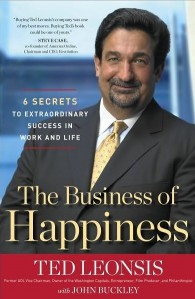 Earlier this year, he released his autobiographical/inspirational book The Business of Happiness: 6 Secrets to Extraordinary Success in Work and Life, in which he revealed the importance of pursuing happiness in order to achieve success, two things the Brooklyn born sports and media mogul knows a great deal about.  It is no secret that one of the biggest motivators for Leonsis in achieving tremendous success, in addition to fulfilling the majority of 101 dreams – according to his bucket list — has been his second chance at life.  About 30 years ago, after surviving on an airplane that appeared to be crashing, Leonsis found a new lease on life.

While not a religious man — he concedes — Leonsis says he drew on his marketing and sales background in the moments prior to the possible crash, negotiating with God in lieu of a desperate prayer. “I said please, I know this is a test, don’t let me die; I’ll give you a good deal if you let me live. The best offer I could make was that if you let me live, I’ll live a life without regret and I’ll leave more than I take.”

He calls that experience a “reckoning”, though he believes that reckonings don’t have to come in the form of a near-death experience.  “I’ve come to believe that reckonings happen everyday to every person, every family. They come in all sizes — someone breaks your heart, you have a setback in your career — to be honest half of all marriages end in divorce — someone gets sick, someone dies.  There are life-changing moments in front of everybody.”  While he says dealing with reckonings usually causes an obvious down cycle, it is how you deal with it that drives how the up cycle ends. “I just learned to be aware of these life-reckoning moments and use them as a hurdle you have to go over to make the rest of the run easier.”

After surviving the plane crash, he drafted his bucket list: 101 things to accomplish before he dies.  He admits that he has been religiously crossing things off, though in his quest he has learned to look beyond just a checkmark.  “A lot of the achievement of the crossing things off is really all a part of trying to become self-actualized and happy.” He recalls a field trip when he accompanied his son to the Library of Congress.  He saw the Declaration of Independence from the first to the final draft.  “The only paragraph that was not rewritten was ‘life, liberty and the pursuit of happiness’ and it was like, happiness is at the core of the founding of our country, yet when I was growing up, you went to college and no one would talk to you about being happy.  They’d talk to you about being successful, and that really got me to thinking. Was there a correlation? Did success lead to happiness or did happiness lead to success?”  He says that his own experiences and encounters have proven that while successful people aren’t always happy, the happy ones are usually very self-actualized and successful.

Though Leonis has accomplished much in his life, from being largely responsible for the success of internet giant AOL to producing an Emmy award-winning documentary (Nanking, 2007), when questioned about the most important accomplishment in the last 20 odd years, he emphatically speaks of his marriage and children without pause.  He says growing up as an only child with his parents gave him perspective and he states firmly, “Relationships are what matter and family is paramount.”

While he is proud to be the owner of three sports teams, he gives credit to his wife for making him seize the opportunity.  When first given the opportunity to buy a sports team, Leonsis says he initially passed, because he felt he had too many other obligations and was wary of the public scrutiny that came with the job. His wife, however, helped him remember exactly why it was included on his bucket list.  “She said ‘Well, what happens if you never get another chance to buy the teams?  Would you feel incomplete?  Would you have regrets?’” he recalls. His desire and promise to live a life without regrets is what ultimately led him to make the decision to buy the teams.

He believes in the power of envisioning as a tool for success, as evidenced by his bucket list.  It serves as evidence of the things he has accomplished and gives him the opportunity to truly live a life without regret. “There’s a real power in being able to make this list and then saying I’m gonna live up to those commitments, because if I do, it’ll help build this body of work and help to build a full life.” Though undoubtedly successful before the bucket list, without it Leonsis may not have accomplished many of the feats he has achieved, including sports ownership.

In his brief time as a team owner, Leonsis has developed a rapport with fans and players alike, though he doesn’t take that as an indication that he should rest on his laurels.  “I don’t think I’ve accomplished anything yet. I want to see results. I do think the fans trust me, because I’ve been very transparent with them. It’s ironic, we’re living in this world of WikiLeaks, where people have all these deep, dark secrets, and they don’t want the public to know, and I live in a world where I think transparency really is important. So I tell our fans everything that’s happening, and I solicit their input, and they feel — rightly so — that they’re part of the process, that we’re in it together.”

His words are reflected in his availability to his fans, whom he contacts directly via email and on his blog. “We’re living in this world sometimes, where the most senior executives are handled, and I’m not, you know.  I don’t think I need to be coached on what to say. I don’t think I need filters or steps between me or the fans. In fact I’m unfiltered. Fans reach me directly, tell me what the issue is and then I try to solve their problem by going to my infrastructure. Where in the past, it would be a fan would send an email or complaint to someone lower in the organization; it would never make its way up to the owner. So I think we can provide better services and build better products and craft better teams by capturing the collective wisdom of the fan base.” His goal — with the help from the fans — is to build strong teams and bring a championship to the city once more. A championship would mean much for the city and the fans, as well as to Leonsis himself.  It’s one thing he hasn’t been able to cross off the list just yet.

Though born and raised in New York, Leonsis has come to call the District his home, graduating from Georgetown University and settling here with his wife to raise their children.  When asked about his thoughts on the city, he has mixed feelings.  “One part of me believes that this is the greatest city in the world, that it’s the most wired, the most educated, the most powerful, has the best economy, has the smartest people, and I couldn’t be more proud to be here.” On the other hand however, he notes that the city is plagued by crime and social injustices that don’t seem to fit with the American ideals the city is meant to represent on the world’s stage. “There’s a part of Washington that’s just unacceptable for the most powerful, richest country in the world to let happen. The level of homelessness in the city is unacceptable. The school systems here and the lack of high graduation rates for high school students are terrible. The AIDS epidemic in this city is like a poor third world developing nations, and this juxtaposition between the city on the hill and these corners of despondence and poor economic opportunities, it just doesn’t seem right and I don’t get it.” He says that he and his friends, as business leaders, are looking for ways to help bring their talents and gifts to the problems of the city.  He believes if we are unable to make our Capitol great, then the talk of making the nation great lacks truth. It is obvious through his passion for community and philanthropy that Leonsis believes in not only speaking of great things, but also acting on his words and achieving them.

Through his contributions to various charities and sincere desire to change his community, it is safe to say Leonsis has made good on his promise to leave more than he takes from the world.  While he values happiness over success, it is obvious that through his passion for life, devotion to both family and work and most visibly his affable grin, Leonsis is a businessman that has achieved both with enormous strides.

You can watch the entire interview with Ted Leonsis, in which he discussed doing “The Dougie” and his thoughts on the possible Bullets name change, on DC Spotlight TV.