You are at:Home»Features»The Nation»What Just Happened? Wisconsin Republicans Chisel Away at Unions
Tweet 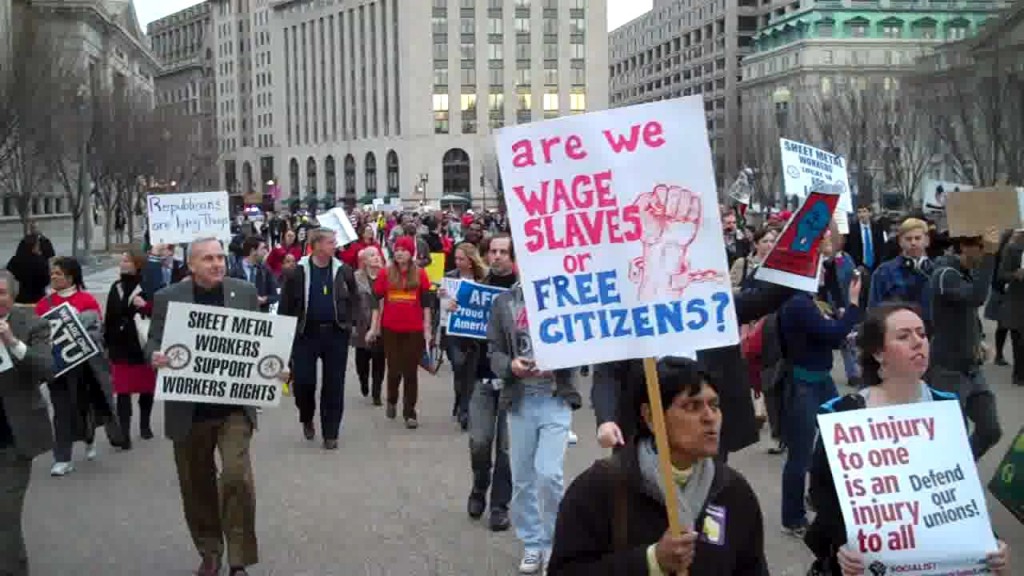 — Andrew Large, protester at the rally against Wisconsin union-busting

Residents of the District are accustomed to political showdowns in the nation’s capital, but recently the antics of Wisconsin lawmakers have rivaled any face-off in recent memory in Washington, D.C.  Republicans tried to put a measure through undetected, then tried to force the bill through.  In the end, Republicans of Wisconsin’s State Senate – in allegiance with the new Republican Governor Scott Walker – walked a razor’s edge of legality to vote on a bill that would infuriate the Democrats, outrage pro-union protesters and undo 50 years of collective bargaining rights for Wisconsin public union members.  While this confusing, complicated struggle plays out in Wisconsin, however, the biggest question remains: how does this affect law and labor around the country? 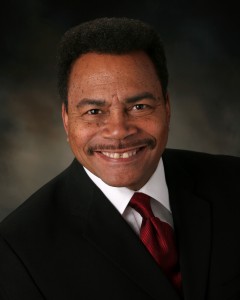 Senator Spencer Coggs is one of the “Wisconsin 14” – the Democratic Senators who fled their state in an attempt to prevent passage of a bill which, in their opinion, would unfairly strip public union members of their rights.  They remained in Illinois – out of reach of the Wisconsin police who, though largely sympathetic to their cause, were under orders to apprehend any Democratic senator found in the state but away from the capitol.

The wait for a resolution was arduous, but they were determined to stay unified.  “[The Republicans] thought that we couldn’t stick together.  They thought that 14 people couldn’t agree on anything – let alone 14 Democrats – and we proved them wrong,” he says. “If one of us had come back – one – they could have passed this entire bill.” Wisconsin law requires a quorum of 20 state senators to vote on a budget bill.  The 19 Republicans found themselves one senator short.  Facing increasing protests at the capitol building in Madison, they had to seek other means to earn Governor Scott Walker his victory.

So, on Wednesday, March 9th, after another day spent waiting out the absent Democrats and thousands of protesters, the remaining 19 senators voted in near secrecy on a bill to limit the public union’s collective bargaining rights by removing the fiscal aspects of the bill.  The unions had already agreed to the fiscal requirements that they should shoulder more of the burden for their benefits.  The bill passed by the Republicans had the sole purpose of hamstringing the public union’s powers.  To Coggs, this discredits Walker’s reasoning behind the initial bill and brings his motives into question.  “The Governor did not tell the truth when he said the fiscal portion [of the bill]was the important part.  By passing the policy and not the fiscal, [Walker] proved himself to be wrong; he proved himself to not be telling the truth.”

To complicate matters further, Wisconsin law states that “all meetings of all state and local governmental bodies shall be publicly held in places reasonably accessible to members of the public.”  Coggs believes the Republicans held the vote less than two hours after notice was given.  “We say they did an illegal act in an illegal fashion.”  Because the public was not adequately informed or given access to the meeting where the bill was passed, Dane County District Attorney Ismael Ozanne filed a lawsuit to block the bill, which was upheld by county judge Maryann Sumi.  However, Republicans managed to get the bill published anyway – but not by the Wisconsin Secretary of State, which would bring the law into effect, but by the Legislative Reference Bureau.  Republicans claimed that this publication made the bill law in any case.  Judge Sumi was forced to restate that the bill will not be law until it is confirmed to be a legal bill, and the stalemate and confusion in Wisconsin continues. 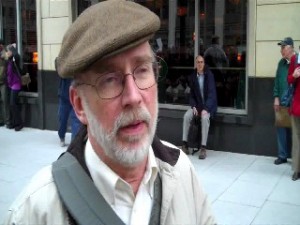 But the events in Madison have echoed around the country, with almost two-thirds of Americans supporting the Democrats and the rights of unions.  That support has reached the nation’s capital, where hundreds turned out on March 16th to protest the bill in a march which coincided with Wisconsin Republican State Senator Scott Fitzgerald’s visit to the BRG lobbying group for a fundraiser.   “Labor unions are a source of reform generally,” says Bartlett Naylor, a financial policy advocate from Arlington and one of many on hand at the DC rally.  “They’re a counter-balance to corporate power.  Labor unions gave us the five-day work week and the forty-hour work week…They gave us worker safety rules.”

Members of the public, like Naylor, do not view what has happened in Wisconsin as an isolated case of a state reining in union power in order to balance its budget.  Instead, they see widespread attacks on organized labor, evoking flashbacks of scabs, picket lines and strike-breakers.  “It’s the same old themes from the 1890s,” says Dale Carder, a Wisconsinite and former union member, who also attended the Washington, D.C. protest.  “I think it’s a wake-up call, and it’s a warning.  If it can happen in Wisconsin, it’ll happen everywhere else.”  The loss of the strength of public unions in Wisconsin has given way to renewed support for union rights throughout the country.  It has also helped to galvanize resistance in other states which may face similar measures from emboldened Republican administrations.  “It’s just a domino effect,” says Dave Munda.  He attended the rally in the District as part of a larger tour which began in Milwaukee, continued to Madison, and then brought him through Michigan on his way to DC.  He planned to visit Ohio and Indiana – where measures similar to those in Wisconsin have been brewing – on his way home.  What happened in Wisconsin, he says, “…is just the start of what [Republicans] really want to try to accomplish.  This is just a corporate takeover of our government.” 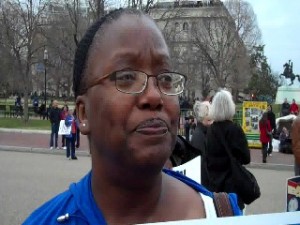 “I definitely see it as an early movement to bust the unions and break the backs of middle-class Americans,” agrees DC area lawyer Mary Williams, also attending the rally.  “We must take a stand, because we are losing ground fast.”  When asked about the fiscal need for the Wisconsin bill, Williams says “There is a better way to balance the budget.  It shouldn’t be on the backs of the workers of America.”  Some point to recent tax breaks for the wealthy as a bigger drain on the budget than public union benefits.     “The tax policy generally needs to be reformed,” says Bartlett Naylor.  “Tax policy needs to be progressive.  Right now, it is not progressive…Lower-income people shoulder much more of the burden than upper-income people.”  Rockville resident Brenda Taylor agrees.  “When times are good [the wealthy]deserve their tax breaks.  Now times are bad, they still deserve their tax breaks.  When are they ever going to be in a position where they feel like, ‘Oh, we can do without these tax breaks for a while’?”The vocal marchers crowded the sidewalk by Metro Center, marched to the White House and then to the Chamber of Commerce.  The makeup of the group was diverse, but their hopes for satisfaction in the struggle between labor and management were consistent.  Though many called themselves Independents, the consensus is that the Democrats should reclaim their ties with labor.  “I think [Republicans] overestimated what the [2010] election results really meant,” says Brenda Taylor.

Republicans made huge gains in Congress and in State governments in 2010, but voter turnout was only about 85 million nationally — versus 130 million in 2008 — of an estimated 200-210 million eligible voters.  The number of actual voters supporting Republican policies in 2010 does not constitute a mandate in the country or in Wisconsin.

“If you look at the turnout for the [2008] Obama election – huge turnout in Wisconsin,” says Dale Carder.  “One year ago, very low turnout.”  More registered voters did not vote than voted for either major candidate for Wisconsin Governor, and Scott Walker defeated Democrat Tom Barrett by about 125,000 votes.  With over 5.5-million residents and 3.5-million registered voters in Wisconsin, 800,000 more voters turned out to choose Barack Obama over John McCain in 2008 than showed up at the polls in 2010. 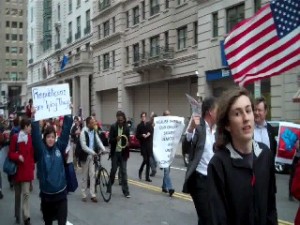 “Most of Wisconsin is independent…There are so many people that are straight down the middle, and [those are]the people that are now outraged – [those]who sat out in the last election,” explains Carder.  Brenda Taylor expects a national backlash from the anti-union policies put forth by Republicans.  “When the next elections roll around, they’re hoping that people are going to forget…But I’m hoping we won’t forget.”  In Wisconsin, many voters will not have to wait until November of 2012 to express their anger. Any Wisconsin lawmaker in office for over one year is eligible for a recall vote, and signatures are already being collected to recall the eight eligible Republican state senators.  Several of the eight eligible Democrats, including Spenser Coggs, may face recalls as well, but most feel recalls are likely to favor the Democrats. Polls in Wisconsin and nationally show less than 35% support for bills similar to those pushed through by the Wisconsin Republicans.

“The active recalls came because people had seen the bill and knew that these Republicans were voting for the bill,” says Coggs.  If three of the eight eligible Republicans lose their seats, the landscape for Scott Walker changes drastically.  “As early as November of this year, [Democrats] could have a majority in the [Wisconsin] Senate,” says Coggs.  “And then people are waiting for January 3, 2012.”  That’s the day, according to Wisconsin law, Governor Scott Walker would become eligible for recall.

With union support growing around the nation as unemployment rates soar and workers become more dissatisfied, Republicans are hoping other issues will take center stage before the elections of November 2012.