You are at:Home»Features»Living the Life»The Top 10 (#2) Senator Jennie Forehand: The Genteel Maverick
Tweet 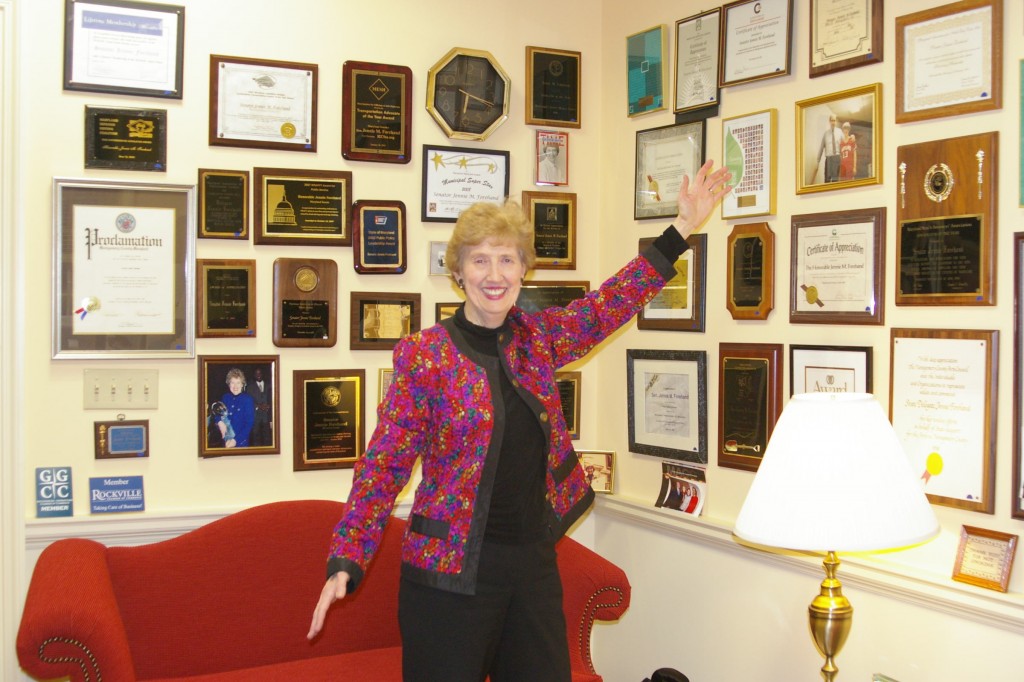 “When I went to my committee, the first week that I was there, I found an ashtray on every chair and desk.  I hid them

all under the radiators. Three days in a row they put new ashtrays out and I hid them – that led eventually to Maryland becoming smoke-free.” This is how Senator Jennie Forehand has always worked, behind the scenes, in a quiet, but persistent manner. She has been a legislator for 15 years in the Senate. Prior to this, she served four terms in the House of Delegates.  She has sponsored and pushed legislation ranging from human trafficking to identity theft to transportation, and yes, a smoke-free Maryland also.  A strong advocate for mental health services, she is also the “founding mother” of the John L. Gildner Regional Institute for Children and Adolescents in Rockville, which serves people with emotional disabilities.

Nearly every time Senator Forehand gives a speech, she has a copy of the book, “On the Edge of Darkness: Conversations about Conquering Depression,” by Kathy Cronkite. She encourages anyone willing to listen to read it, stating “It is an eye-opening experience to understanding depression from the patient’s view point.” Senator Forehand also reveals her experience with the illness. “I tell them the story of my mother, who got depression when she was in her eighties; it was right after my father had died,” she states, strongly believing that it’s important to have open conversation about mental illness.

“Giving people the opportunity to talk to somebody whose been as intimately involved as I’ve been, as an only child who looked after my mother – I think that’s touched a lot of lives.”

Senator Forehand’s parents played an important role in shaping her work ethic. The women’s movement also influenced her. “It gave me courage. Women of my generation experienced a lot of discrimination.” One woman in particular has continued to be a source of inspiration for Senator Forehand. “When I started, I was the first woman who had run for the legislator, and I was influenced by several women who really became my mentors. Lucille Maurer, a member of the House of Delegates and later State Treasurer – I just saw what she was able to accomplish by doing things in a quiet professional way.”

“A Day in the Life of Senator Jennie Forehand” photo shoot. Forehand (middle) working with photographers in the New Vision Photography Program, which teaches disabled individuals photography and videography skills

After a hard-fought campaign, where the Washington Post endorsed Forehand’s opponent, the senator proved to be no small contender.  She single-handedly defeated her challenger, Cheryl Kagan in the primaries for District 17 in Montgomery County, Maryland. She wants to continue following up on pieces of legislation that have not passed, strengthen laws to help victims of abuse and toughen the penalties concerning human trafficking. Recently, she was involved in a project with New Vision Photography where she invited photographers with disabilities to come to the State Capitol, spend the day with her and perform a  photo shoot entitled “A Day in the Life of Senator Jennie Forehand.” The photo shoot, covered by CNN, was an educative and inspiring experience for all those involved, but more importantly, it empowered the photographers.

In the past, some have criticized the senator for being a “quiet and unassuming leader.” She takes this as a compliment though and asserts, “After racking up achievements, people begin to notice.”  Yes, they certainly have.