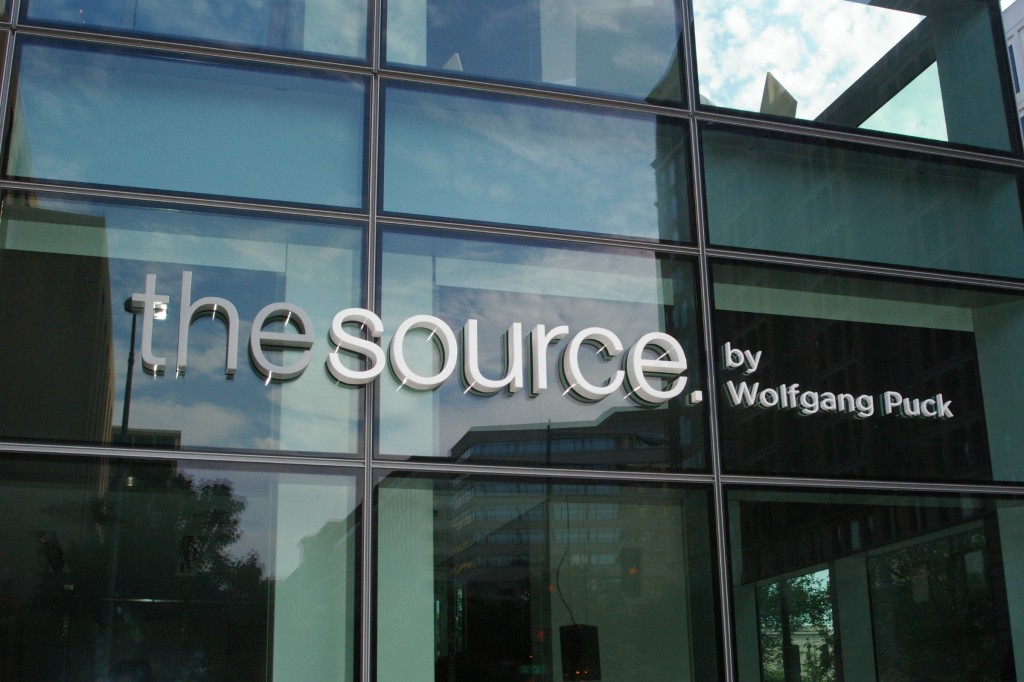 The Finger Lakes region of Upstate New York is not an area of any particular culinary distinction or diversity. To Scott Drewno, award-winning chef at Wolfgang Puck’s The Source and a product of this region, the food scene back home is basically “steak and potatoes.” In collaborating with world renowned celebrity chef Wolfgang Puck to create the menu for The Source, which opened roughly three years ago in downtown DC, Drewno had to escape the limitations of his humble origins. An evening dining at The Source will convince any diner that he has done so with flying colors.

levels: a downstairs level modeled after a Japanese Izakaya, a drinking establishment, that serves small plates and an upper level that acts as more of a full service, fine dining room. The menu on this level features an extensive variety of Asian specialties, traditional North American favorites with Asian tints, and unique creations that defy easy categorization. “What we’ve really tried to do with the menu upstairs,” explains Drewno, “is take different parts of Asia, find dishes that we really like from Asia, from different regions of Asia and modernize them and make them applicable for the fine dining setting.”

Located in the same building as the Newseum, The Source is an easy walk from the National mall, which makes it ideal for a meal after a day of sightseeing – or really for any special occasion. But its lively atmosphere, suggestive of a hip modern art gallery rented out for a lively office party, ensures that this occasion need not be a somber affair. Located on the second floor, the main dining room is dimly lit with overhanging lamps that resemble modern sculptures.

Service at The Source is sophisticated and professional without being intimidating. Waiters take the time to explain complicated combinations of ingredients in each dish, and to suggest a perfect wine pairing from the extensive wine list – (complete with a section headed “Esoteric Wines”) – with a sense of pride one might expect from the chef himself. The staff, incidentally, is as diverse as the food. The combination of Latino, Asian and European servers, introducing edgy fusion dishes makes dinner at The Source feel like a truly twenty-first century experience.

Drewno humbly credits this entire staff when speaking of the highly coveted Chef of the Year Award, awarded to him by the Restaurant Association of Metropolitan Washington in June. “I think it’s a testament to the team here at The Source,” he beams, “Every member of the team, from the servers, to the busers, to the cooks, to the dishwashers, the hosts, the managers.”

Many of the highlights of The Source’s menu are located under the “Appetizers” heading. Priced – and often portioned – like entrees, each of the menu’s twelve appetizers could conceivably be a small dinner in itself. Spicy Tuna Tartare served in Sesame-Miso Cones ($15) is the only appetizer served in each of Wolfgang Puck’s twenty plus restaurants – and with good reason. These delicate cones pack a deceptively spicy punch and are complemented by the tuna, which melts in your mouth. One of the most intricately prepared dishes on the menu, Tandoori Arctic Char ($16) is served with two different sauces – Cardamom Raita on top and Pickled Japanese Cucumbers underneath. The tender Crispy Suckling Pig is served on a splash of Black Plum Puree ($16). Among the many highlights of the menu are the dumplings, which come six to a plate. Of the five types offered, the Scallop & Shrimp Sui Mai Shanghai Curry Lobster-Uni Emulsion ($16), creamy and slightly sweet, is the most addictive.

Main courses are generously portioned and run in the $29-$40 range. The Colorado Lamb Chops served over Hunan Eggplant ($36) is a dish that embodies The Source’s eclectic influences, as are the Pan-Seared Sea Scallops, served on a bed of Drunken Noodles and covered in a Coconut Peanut Sauce ($31). One of the biggest tastes on this portion of the menu comes from one of the most geographically diverse dishes: the “American Style” Kobe Beef Short Ribs, which are slow-cooked and served with a variety of Indian spices ($34). The hint of saffron in this dish complements, but never overpowers, the beef.

Of the seven desserts on the menu – including the drolly named “Assorted Cookies of Good Fortune” – the Warm Bluberry Crumble ($10) is a standout. The pedestrian-sounding Vanilla Ice Cream that accompanies it is so packed with flavorful vanilla beans that it is worth ordering by itself.

With its efficient staff, its slick interior and above all its cutting edge Asian-inspired cuisine, The Source is likely to provide guests with one of the most memorable dining experience DC has to offer. On top of it all, its small balcony offers an excellent view of Penn Quarter and the National Gallery of Art.