1) Boys in the Trees: A Memoir 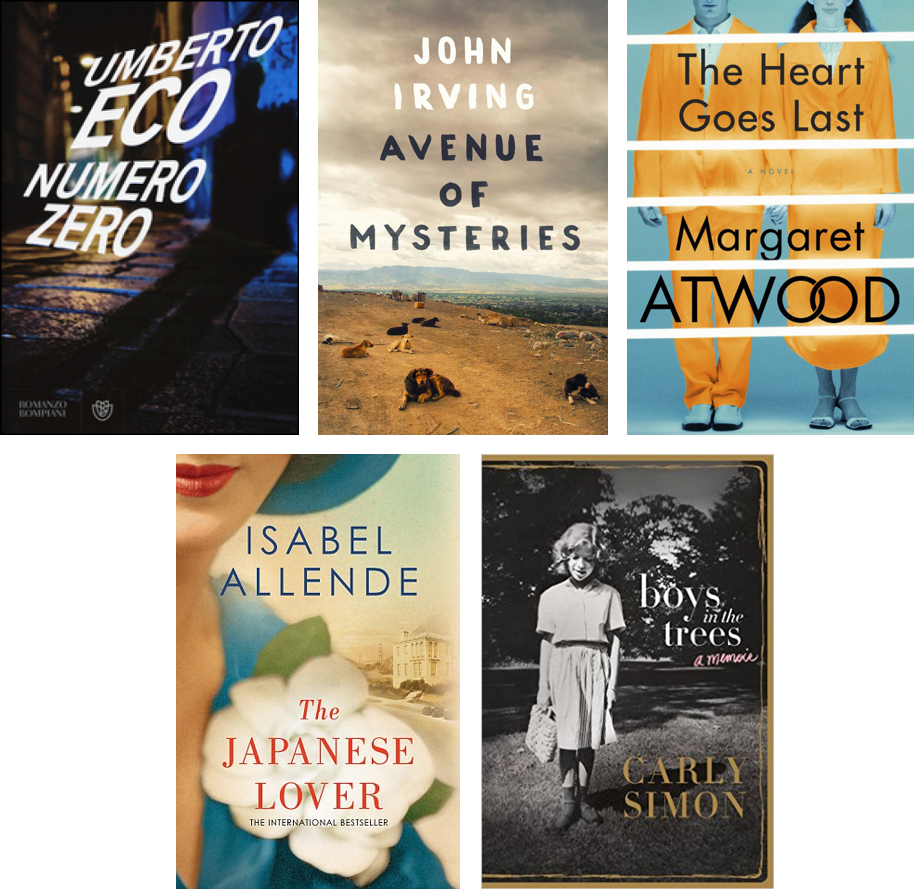 Simon’s memoir reveals her remarkable life, beginning with her storied childhood as the third daughter of Richard L. Simon, the co-founder of publishing giant Simon & Schuster, her musical debut as half of The Simon Sisters performing folk songs with her sister Lucy in Greenwich Village, to a meteoric solo career that would result in 13 top 40 hits, including the #1 song “You’re So Vain.” She was the first artist in history to win a Grammy Award, an Academy Award and a Golden Globe Award, for her song “Let the River Run” from the movie Working Girl.

The memoir recalls a childhood enriched by music and culture, but also one shrouded in secrets that would eventually tear her family apart. Simon brilliantly captures moments of creative inspiration, the sparks of songs, and the stories behind writing “Anticipation” and “We Have No Secrets” among many others. Romantic entanglements with some of the most famous men of the day fueled her confessional lyrics, as well as the unraveling of her storybook marriage to James Taylor.

2) Paper in the Wind: Autism in the Wake of Tragedy

Paper in the Wind is a compassionate and riveting story depicting a single father’s dedication to his daughter. In the midst of the overwhelming struggles that accompanied autism, he continues to persevere. Her father’s love enabled her to overcome insurmountable obstacles, discovered the power of love and embraced the gift of life.

From the best-selling author of The Name of the Rose and The Prague Cemetery, a novel about the murky world of media politics, conspiracy, and murder

A newspaper committed to blackmail and mud slinging, rather than reporting the news.

A paranoid editor, walking through the streets of Milan, reconstructing fifty years of history against the backdrop of a plot involving the cadaver of Mussolini’s double.

The murder of Pope John Paul I, the CIA, red terrorists handled by secret services, twenty years of bloodshed, and events that seem outlandish until the BBC proves them true.

A fragile love story between two born losers, a failed ghost writer, and a vulnerable girl, who specializes in celebrity gossip yet cries over the second movement of Beethoven’s Seventh. And then a dead body that suddenly appears in a back alley in Milan.

Set in 1992 and foreshadowing the mysteries and follies of the following twenty years, Numero Zero is a scintillating take on our times from the best-selling author of The Name of the Rose and Foucault’s Pendulum.

John Irving returns to the themes that established him as one of our most admired and beloved authors in this absorbing novel of fate and memory.

In Avenue of Mysteries, Juan Diego—a fourteen-year-old boy, who was born and grew up in Mexico—has a thirteen-year-old sister. Her name is Lupe, and she thinks she sees what’s coming—specifically, her own future and her brother’s. Lupe is a mind reader; she doesn’t know what everyone is thinking, but she knows what most people are thinking. Regarding what has happened, as opposed to what will, Lupe is usually right about the past; without your telling her, she knows all the worst things that have happened to you.

Lupe doesn’t know the future as accurately. But consider what a terrible burden it is, if you believe you know the future—especially your own future, or, even worse, the future of someone you love. What might a thirteen-year-old girl be driven to do, if she thought she could change the future?

As an older man, Juan Diego will take a trip to the Philippines, but what travels with him are his dreams and memories; he is most alive in his childhood and early adolescence in Mexico. As we grow older—most of all, in what we remember and what we dream—we live in the past. Sometimes, we live more vividly in the past than in the present.

Avenue of Mysteries is the story of what happens to Juan Diego in the Philippines, where what happened to him in the past—in Mexico—collides with his future.

5) The Heart Goes Last: A Novel

Margaret Atwood puts the human heart to the ultimate test in an utterly brilliant new novel that is as visionary as The Handmaid’s Tale and as richly imagined as The Blind Assassin.

Stan and Charmaine are a married couple trying to stay afloat in the midst of an economic and social collapse. Job loss has forced them to live in their car, leaving them vulnerable to roving gangs. They desperately need to turn their situation around—and fast. The Positron Project in the town of Consilience seems to be the answer to their prayers. No one is unemployed and everyone gets a comfortable, clean house to live in . . . for six months out of the year. On alternating months, residents of Consilience must leave their homes and function as inmates in the Positron prison system. Once their month of service in the prison is completed, they can return to their “civilian” homes.

At first, this doesn’t seem like too much of a sacrifice to make in order to have a roof over one’s head and food to eat. But when Charmaine becomes romantically involved with the man who lives in their house during the months when she and Stan are in the prison, a series of troubling events unfolds, putting Stan’s life in danger. With each passing day, Positron looks less like a prayer answered and more like a chilling prophecy fulfilled.

Named one of the most anticipated novels of the year by New York Magazine, The Wall Street Journal, Entertainment Weekly, Cosmopolitan, Harper’s Bazaar, Publishers Weekly, The Huffington Post, and more. From New York Times and internationally bestselling author Isabel Allende, an exquisitely crafted love story and multigenerational epic that sweeps from San Francisco in the present-day to Poland and the United States during the Second World War.

In 1939, as Poland falls under the shadow of the Nazis, young Alma Belasco’s parents send her away to live in safety with an aunt and uncle in their opulent mansion in San Francisco. There, as the rest of the world goes to war, she encounters Ichimei Fukuda, the quiet and gentle son of the family’s Japanese gardener. Unnoticed by those around them, a tender love affair begins to blossom. Following the Japanese attack on Pearl Harbor, the two are cruelly pulled apart as Ichimei and his family—like thousands of other Japanese Americans—are declared enemies and forcibly relocated to internment camps run by the United States government. Throughout their lifetimes, Alma and Ichimei reunite again and again, but theirs is a love that they are forever forced to hide from the world.

Decades later, Alma is nearing the end of her long and eventful life. Irina Bazili, a care worker struggling to come to terms with her own troubled past, meets the elderly woman and her grandson, Seth, at San Francisco’s charmingly eccentric Lark House nursing home. As Irina and Seth forge a friendship, they become intrigued by a series of mysterious gifts and letters sent to Alma, eventually learning about Ichimei and this extraordinary secret passion that has endured for nearly seventy years.

Sweeping through time and spanning generations and continents, The Japanese Lover explores questions of identity, abandonment, redemption, and the unknowable impact of fate on our lives. Written with the same attention to historical detail and keen understanding of her characters that Isabel Allende has been known for since her landmark first novel The House of the Spirits, The Japanese Lover is a profoundly moving tribute to the constancy of the human heart in a world of unceasing change.

Stephanie Plum might not be the world’s greatest bounty hunter, but she knows when she’s being played. Ken Globovic (aka Gobbles), hailed as the Supreme Exalted Zookeeper of the animal house known as Zeta fraternity, has been arrested for beating up the dean of students at Kiltman College. Gobbles has missed his court date and gone into hiding. People have seen him on campus, but no one will talk. Things just aren’t adding up, and Stephanie can’t shake the feeling that something funny is going on at the college—and it’s not just Zeta fraternity pranks.

As much as people love Gobbles, they hate Doug Linken. When Linken is gunned down in his backyard it’s good riddance, and the list of possible murder suspects is long. The only people who care about finding Linken’s killer are Trenton cop Joe Morelli, who has been assigned the case, security expert Ranger, who was hired to protect Linken, and Stephanie, who has her eye on a cash prize and hopefully has some tricks up her sleeve.

Will Robie is the government’s most professional, disciplined, and lethal assassin. He infiltrates the most hostile countries in the world, defeats our enemies’ advanced security measures, and eliminates threats before they ever reach our shores.

But now, his skills have left him. Sent overseas on a critical assignment, he fails, unable to pull the trigger. Absent his talents, Robie is a man without a mission, and without a purpose.

To recover what he has lost, Robie must confront what he has tried to forget for over twenty years: his own past.

9) The Story of Diva and Flea

By: Mo Willems and Tony DiTerlizzi

Diva, a small yet brave dog, and Flea, a curious streetwise cat, develop an unexpected friendship in this unforgettable tale of discovery.

The mega-talented creator of Grey’s Anatomy and Scandal and executive producer of How to Get Away With Murder chronicles how saying YES for one year changed her life―and how it can change yours, too.

With three hit shows on television and three children at home, the uber-talented Shonda Rhimes had lots of good reasons to say NO when an unexpected invitation arrived. Hollywood party? No. Speaking engagement? No. Media appearances? No.

And there was the side-benefit of saying No for an introvert like Shonda: nothing new to fear.

Then Shonda’s sister laid down a challenge: just for one year, try to say YES to the unexpected invitations that come your way. Shonda reluctantly agreed―and the result was nothing short of transformative. In Year of Yes, Shonda Rhimes chronicles the powerful impact saying yes had on every aspect of her life―and how we can all change our lives with one little word. Yes.