You are at:Home»Sports»Sports Insider Weekly»SPORTS INSIDER – Redskins: Kirk Cousins is in; RGIII is out
Tweet

On Monday, the Washington Redskins named Kirk Cousins as their starting quarterback ahead of the 2015 season.  The news came after a long weekend in which RGIII was abruptly scratched from Saturday’s game and numerous reports surfaced claiming the Redskins were ready to cut ties with the quarterback once and for all. So while the not surprising, the announcement does cause some to wonder what the state of the Redskins will look once the season starts.

Despite lingering doubts about his health, his ability, and his relationship with coach Jay Gruden, Griffin 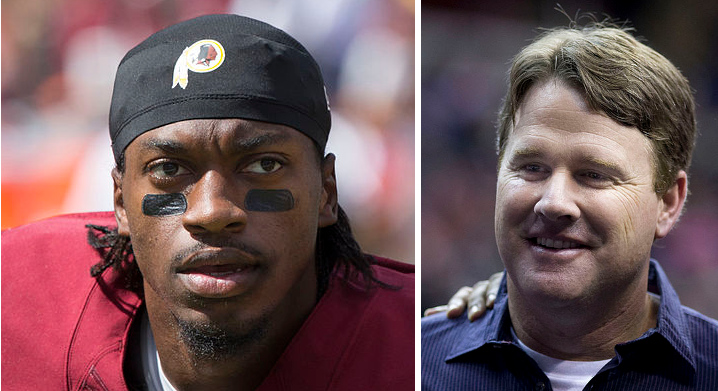 was named the team’s starter at quarterback back in February. “We’ll go into the season with Robert as the No. 1 guy obviously, and it’s up to Robert to continue to grow and mature as a quarterback and a person and moving forward, we just want to see some improvement,” Gruden said at the time. “That’s up to us as a staff to get more out of him.

Obviously, the organization has not been happy with his performance, or his progression over the past six months. Yet the decision seemed abrupt; Griffin had just six snaps over the first two preseason games before he was sidelined with a concussion against Detroit on August 20th.

Many expected Griffin to play this past Saturday against the Baltimore Ravens, before he was scrapped on Friday, with the team citing his health. Yet when Gruden announced the quarterback change on Monday, he said it had nothing to do with Griffin’s physical condition. Instead, the decision was based solely on Cousins’ preseason performance–40-of-53 for 435 yards, two touchdowns and one interception.

“Really, this is about Kirk doing an excellent job and winning the job. Robert is disappointed, as I’m sure Colt McCoy is disappointed,” Gruden said. “I think all three quarterbacks should be commended for their efforts, their willingness to get better. But when it’s all said and done…we feel at this time, Kirk Cousins give us the best chance to win.”

It is clear that Gruden and the rest of the organization’s brass believe that Cousins is not the same player he was less than a year ago, when he was benched in Week 7 after committing 11 turnovers in 5 games.

But while Griffin has struggled to recapture the magic and production of his 2012 rookie year, he has still fared better than Cousins over the past two seasons, posting a 5-15 record and 63% completion rate versus Cousins at 1-7 and 58%.

Despite the various rumors of a locker room rift, the Redskins’ new QB had nothing but praise for his teammate and former leader.

“The way that he is a fierce competitor, I’ve always respected,” Cousins said. “He has always been a guy who remains classy, works very, very hard, and I’ve learned from that example.

Backup quarterback is obviously not the position Griffin, nor the organization, anticipated when they traded several first round draft picks to pick him second in the 2012 draft. While his short career has so far been plagued by injuries and drama, it does not appear his time in Washington is up yet.

“I have nothing against Robert,” Gruden said. “I like Robert as a quarterback, no doubt about it. His future is with the Washington Redskins.”

This statement seemed to conflict with reports that surfaced on Sunday saying that Redskins officials and coaches wanted to part ways with Griffin, a sentiment that is reportedly not shared with team owner Daniel Snyder. Gruden tried to squash these rumors on Monday.

“There have been no discussing about letting him go or doing any of that stuff,” he said. “The door is not shut on Robert Griffin.”

Right now, it’s unclear if the Redskins are keeping Griffin in the hopes he will recapture some of his rookie year magic, or if it’s just a strategic move that comes down to the bottom line. If the team were release Griffin now,  it would count $6.7 million against their salary cap. If they trade him, they could be on the hook for the $16.12 million option they picked up for 2016.

In the midst of it all, Griffin has remained silent. The only insight into his current state of mind is a tweet he sent out on Friday, after he was pulled from Saturday’s game.

“Trusting in God even when I don’t understand why certain things happen,” he wrote, citing a Bible verse.