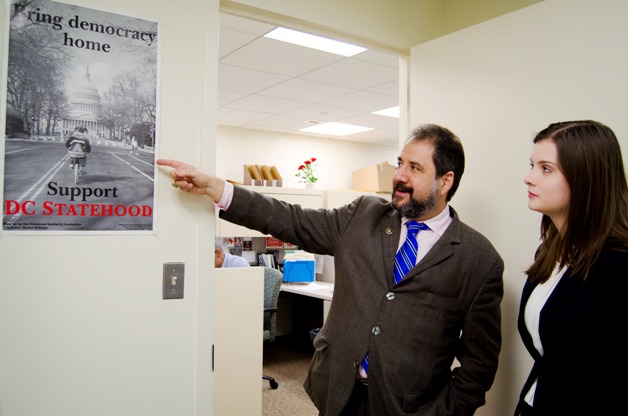 Although comedian Steven Colbert routinely uses the plight of the District of Columbia as food for fodder, many Americans do not realize that Washington, D.C. does not receives full representation and rights in Congress. Although there are senators representing the District and a delegate (representative) in the House of Representatives, they do not have full voting rights on the floor in Congress. Paul Strauss is one of those senators who has served in the District since 1997. He is a strong supporter of statehood for the District of Columbia and believes the time has come for Congress to make that historic move to give residents an equal voice. The DC Spotlight Newspaper got the exclusive on Senator Strauss’ next step in his fight for Washington, D.C. statehood.

Higgins: Senator Strauss, tell me a little bit about yourself.

Strauss: Well, I grew up in New York City but I came here to the District of Columbia to attend American University, as a freshman. There I got involved in student politics and it was a transition to elected politics here in the District of Columbia. During that time, I actually won my first election as an ANC Commissioner, while I was still an undergraduate at American University.

Higgins: Good for you. What is your role as Shadow Senator?

Strauss: Well, Shadow Senator is a kind of a nickname. The actual title of the position is United States Senator for the District of Columbia. I am one of two elected representatives to advocate for DC in the United States Senate. We do not limit our advocacy to Senate; we of course deal with the House, and other governments around the country and sometimes even in international forms. 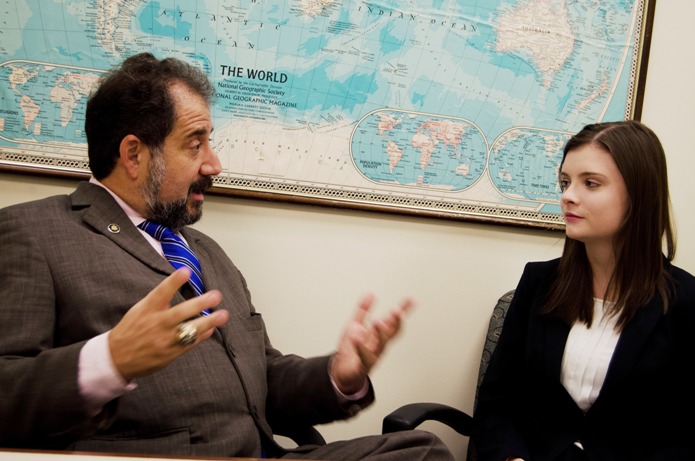 Higgins: So, are you for DC Statehood then?

Strauss: DC Statehood is absolutely something that D.C. residents deserve. I’m a big supporter of it. We’ve tried other solutions to advance our equality: partial-voting rights, incremental steps towards autonomy. But only D.C. statehood accomplishes all of the goals that everybody wants. Specifically, full federal representation in our national government and full self-determination for the District of Columbia, and if we do it the way the bill that we are advocating intends, you even keep a purely federal district that is under the control of Congress. It just doesn’t have over 700,000 people living in it without democratic rights.

Higgins: What are the chances of D.C. receiving statehood over the next 10, 20 years? What is your ideal goal?

Strauss: Congress can do it today, and I know that we have a president right now that would sign it. Given the Republican control of both Houses that seems unlikely. I’m the first to concede that. Statehood is tied to national politics. You give me a solid Democratic majority in both Houses and an administration that is sympathetic to the cause, it’s very achievable. But we are in a very polarized part of our politics right now. We don’t have basic consensus over gun safety laws nationally, the rights of women. We’re only beginning to get full equality for people based on sexual orientation. We have great economic issues that are dividing us and DC statehood, sadly, is becoming one of those issues that isn’t getting the attention it is. When is does come up it’s often misconceived in partisan attitudes and not on the principal basis that all Americans deserve equal rights.

Higgins: Are there any other specific issues that you spend your time fighting for?

Strauss: Absolutely, we have a Congress that routinely interferes in our ability to govern ourselves and that can have some real problems, real consequences. When Congress tries to overturn local gun laws, that could make the District a much more dangerous place to be. When Congress defunded our needle exchange program, we saw an increase in the spread of HIV, AIDS, and other blood-borne viruses. So Congress’ interference in D.C. isn’t necessarily just political; it can sometimes have life or death consequences for the people who live here.

Higgins: Why do you think there is so much disorder in Washington (referencing Congress, as opposed to the District itself)?

Strauss: I don’t know if there is disorder per se. Basically, we have the legal equivalent of a state; it does all the functions of a state from printing the license plates that say ‘Taxation with out Representation’ on them, to passing criminal laws, collecting revenue, maintaining infrastructure, regulating hospitals, [and]schools. But every law that our government passes has to go to Congress and Congress is extremely dysfunctional right now. It’s not passing laws like Congresses used to in the past. It’s not meeting the needs of the nation. Consequently, the District’s ability to govern itself is compromised, because everything we do here has to be approved by a Congress that rarely approves things that it needs to do for the nation. It doesn’t pass budgets on time. We almost hurt our economy with fights over the debt ceiling. It took the House of Representatives weeks just to settle on a candidate for their own speaker. So, its one of the most dysfunctional Congresses that I have ever seen, and despite one of the best run District administrations. We have a great mayor — someone who I actually met when she was a student at American University when I was teaching there. [She’s a] brilliant women, who is doing a great job, but it is hard to get things done under this Congress, especially when you do not have the sovereignty that the 50 states have.

Higgins: What is your relationship like with the DC mayor?

Strauss: Mayor Bowser and I have an excellent relationship. She is a strong supporter of statehood, because she understands it’s the right thing to do on principle. I think she understands that it’s the right thing to do to help her effectively govern this community. I really like to call her the governor, because she is really the governor of our state. In fact, when we go to the Democratic Convention, the Democratic Party that believes in D.C. equality, gives her the privileges of a governor, just like it gives me the privileges of a voting senator. So, we are making strides towards full democracy; we elect our attorney general now. It is my hope that the democratic movement in D.C. towards full equality will continue. But I enjoy working with this mayor. She’s young. She’s energetic, and she’s had some good teachers along the way.

Higgins: More long-term residents of Washington, D.C. are moving out of the area because of the increasing cost of rent and the crime rate. What are you doing to allow more people to stay in the District?

Strauss: Well, first of all, I don’t know if that’s true. We are seeing a lot of short-term residents continuing to move into the District. But I don’t know if long-term residents are necessarily moving out. What we are seeing is a great appreciation in property values. When you encourage home ownership, that is a wonderful thing. In fact, when your housing policy is based too heavily on subsiding renters, that creates a lot of pressure on the economy? So, I think some years ago, we are seeing the affect today of some short-sighted policies from some years ago. Where you have 15 year subsidized leases that expire, buildings that are located on land that is incredible valuable now. I think, from a housing prospective, we have really lost a big opportunity, because we’ve enjoyed that last few years with record low interest rates. The best thing for the affordable housing program from a housing prospective is to encourage and subsidized home ownership. Now, the District does do that in many important ways. We have something called TOPA, the Tenant Opportunity to Purchase Act. If you are renting property and it’s for sale, you have a chance to buy it at the same terms that anybody else can. We have HPAP, which is the Home Purchase Assistance Program, where the government will give you a discounted mortgage that will encourage you to be a homeowner. So all of that is designed to keep longer termed residents in the District. Under the leadership of Councilwoman Anita Bonds, we have championed tax subsidies for seniors, so they are not priced out. You know, you paid off your mortgage but now all of a sudden the tax bill can be enough to displace you. So you know those are some good policies. We need to continue those. But the problem isn’t that too many people are moving out. The problem is that the District is such a great place to live that everyone wants to be here. Why do you want to be in the suburbs, pay three, four dollars a gallon for gasoline, live an hour away, loose all that time commuting and then eat at lousy chain restaurants, when you could be a part of the most vibrant diverse community on the East Coast.

Higgins: What are your thoughts on the 2016 presidential election?

Strauss: Its certainly shaping up in ways I didn’t think that I thought it would be. I think we have a great potential nominee in Secretary Clinton. She is someone that I have always respected and feel comfortable that I can get behind. But Senator Sanders, a close personal friend, also a supporter of statehood, is raising an aggressive challenge. Governor O’Malley, our next-door neighbor from Maryland, is a strong supporter of the District. I think that we are going to have a dynamic primary on the Democratic side that is going to energize the party so we can win in November. Now, the Republican side, it’s a little hard to explain. If you would’ve told me that Donald Trump would be the potential front-runner, I just wouldn’t believe it. He is someone I have some concerns about. Even though, he is actually one of the most sympathetic to D.C. statehood. The remarks he has made that are so offensive to Latinos really really concern me. In fact, we had a protest at the sight of that hotel, which is actually on federal property, where we were requesting that the Secretary of the Interior take down the Trump logo, because it’s become associated with offensive racism, just like the Redskins logo is associated. You know Confederate flags are coming down and here we are promoting this on federal property with tax dollars. It didn’t seem right to me. I don’t that we’ve heard the last of that issue, but this is an unusual election. Anyone who tells you that they can predict what’s going to happen is going to be mistaken. All bets are off I think.

Higgins: What is the next step in your political life?

Strauss: Well, believe it or not, after I’m done here and finish up a few things in the office, I am getting on a plane and I am going to go to Brussels and meet with members of an organization called the UNPO which stands for the Unrepresented Nations of People Organization… We are going to petition the UNPO to admit New Columbia as a member organization — that would be the state what we would call ourselves when we are admitted — under the theory that we are not really represented in the United Nations. Normally, it is the United States going in to champion and fight against human rights abuses in other countries. We think it is important to be frank about our own inequities here. So if we can’t get redressed from our Congress, then we will have to take our case elsewhere internationally — as so many other unrepresented peoples do — and take that to the UNPO.