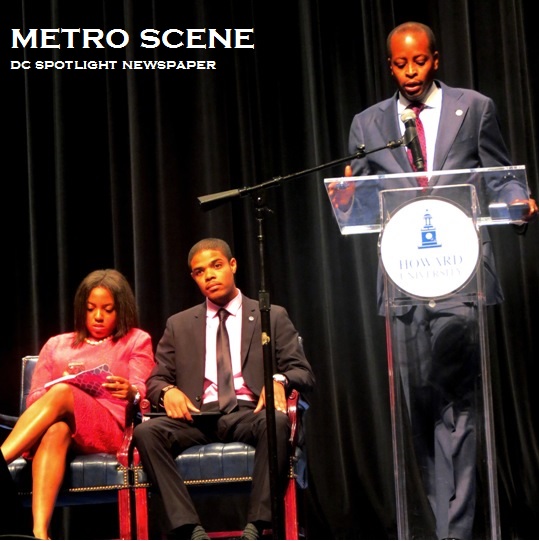 On Wednesday, Howard University interim President Wayne A.I. Frederick addressed the Howard-Shaw community in a town hall meeting, answering questions about his plans for the university.

Fredrick — appointed interim president in early October after President Sidney A. Ribeau announced his retirement — began his presidential career with a flurry of questions, not only from current students, but also alumni and members of the community.  They all want to know the future direction of the university. The night was designed to give students, alumni, and community members the opportunity to submit questions through Howard University Student Life & Activities HUSA; some of which were directed to Frederick at the meeting.

Questions ranged from issues on the state of campus buildings and university fees to campus safety and the school’s relationship with the community.

“I would like to see us create more activities that will bring the community into the university. The streets are open, but our doors are closed to the local community,” said Frederick on the issue of safety and the surrounding neighborhoods.

The more the university involves the surrounding community, the more they will see us as a part of it, which will lead to better safety, he explained. Frederick also addressed the July 4 murder of a Howard student who was fatally shot near the campus. Frederick stated that the Howard community is still mourning the loss of one of its own – Omar Sykes – and that being better connected to the community would improve relations and safety for all. He added that he plans to keep in place former President Ribeau’s university task force, created to enhance safety across the campus through various measures, such as the use of cameras and working closely with the metropolitan police force.

When asked about financial issues, including the transparency of student fees and alumni donations, Frederick committed to adding students to the Budget Advisory Committee. This committee “helps build the budget and makes several recommendations along budgetary issues,” Frederick explained. However, it is completely made up of faculty and staff, no students. Frederick stated that he believed we are at a time where students need to be on the committee as well so that both students and alumni will know how their money is being spent.

Frederick also addressed a question about the progress and upgrades dorm rooms and university buildings are undergoing. He acknowledged that regulating temperature, Wi-Fi connection, and fitting students into dorms and rooms are among the persistent problems that Howard’s buildings deal with.  He said difficult decisions regarding renovating buildings had to be made.

“We really have to make some tough decisions about re-doing some of those buildings and building new buildings. Now, where do we get the money to do that?” Frederick asked.

While recognizing that renovating the buildings would leave a fiscal impact, he made a side note that the buildings could only be redone so many times.  Funds are the main concern with new constructions.

He continued to explain the impact new constructions and renovations would have on the university financially.  He noted that Howard is working towards it slowly with two new developing residence halls, as well as a research center, already in progress.

Ending the hour long discussion, Frederick thanked the audience for attending and their questions. He also stated that he would be holding as many meetings as HUSA allowed him throughout the year.