You are at:Home»Featured»Top 10 List of the Most Interesting People – Steven Weitzman: A lifetime of celebrating Washington, D.C. on canvas
Tweet 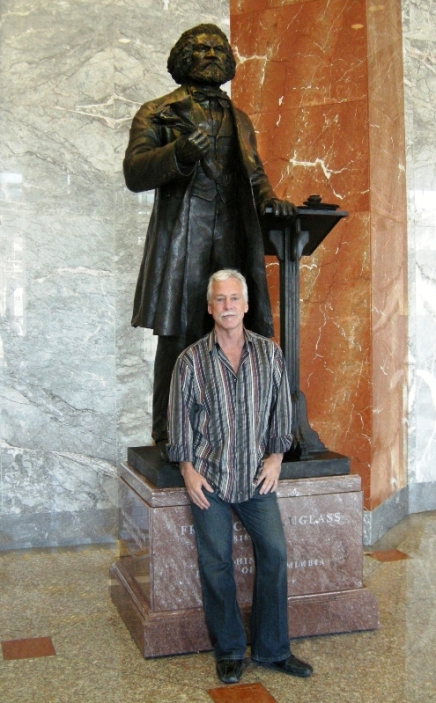 When I read about Gutzon Borglum, who did Mount Rushmore, I thought to myself, you know, you give me enough people and enough money and I could carve a mountain too.
— Steven Weitzman

In the artistic circles of Washington, D.C., Steven Weitzman, has carved out his own niche in a combination of fields described simply as “great art.” He has worked with nearly every creative medium, and with the creation of the bronze Frederick Douglas statue that resides in the Capitol Building, he is truly at the height of his career. The CEO and founder of Weitzman Studios and Creative Design Resolutions Inc., Weitzman is taking his decades of experience and leaving a unique mark on the art community. “I always knew I would be an artist,” Weitzman says with certainty, as he explains his history with art and the creativity that runs in his family. (His father was a painter and illustrator and his brother is a fine jeweler.) “It was the only thing I could actually do well.”

Weitzman began a professional career as an artist at nineteen, and continues to work solely on freelance work. He started as an illustrator and painter, but found that the work was often scarce. “If there wasn’t a painting or illustrating job out there, I was struggling…I realized that if I was going to make a living, I needed to offer more things to my customers.” And more was what he offered, picking up skills like photography, graphic design, brochure design and logo design. He incorporated these specialties into a small advertising company in Colorado and made a successful living at it for about 12 years.

However, during his time in advertising, Weitzman still harbored a love for sculpture and three-dimensional art. “What I did on the side — for fun – was, I would carve wood…and I realized that was the thing that was really filling my heart,” he says. “Getting big chunks of wood made, or finding them to carve was difficult, but finding big dead trees was very easy.” So he left a flourishing career as a graphic designer and started carving trees. Weitzman had set a three-year goal for his sculpting career, and after struggling through the first and improving a bit in the second, he got a commission to sculpt a tree for the United Nations’ Fortieth Anniversary. “It was from that I started doing other things, ” he says.

Weitzman quickly expanded his repertoire to include materials like clay, metals and glass. But he didn’t stop there, and in fact, he decided to invent his own material called FOTERA. “I needed to be diversified…so I started picking up other mediums,” he admits. “I can actually take concrete and make a painting medium out of concrete…it’s like a poured mosaic.” Weitzman’s use of FOTERA has undoubtedly set him apart from other artists and has opened up new doors to the world of infrastructure design. “It was really on the cutting edge of incorporating aesthetics into highway and infrastructure,” he says. He recently used the material in a large mural that featured people like Martin Luther King and Rosa Parks, which was then placed on H Street in Washington, D.C. Weitzman’s company, Creative Design Resolutions Inc., also does a great number of highway and bridge design projects, and he was the designer of D.C.’s bridge over New York Avenue.

Weitzman has lived in Washington, D.C. for about 25 years, and has a large studio just outside the city in Maryland. He believes the beauty of the city is in the people. “D.C. is really unique; it’s an extraordinary, beautiful city,” he says, “and what I hope to see in its development is that it still embraces all of the citizens that have traditionally been here as well as new citizens. I think that’s what makes D.C. so fantastic.” Weitzman also embraces the history of D.C., encompassing the past, present and future of a community into every aspect of a piece. “I don’t believe in ‘plop’ art. I would define that as a piece of public art that could go anywhere. It could go here, it could go there…it doesn’t matter,” he says. “I believe that a piece of public art has to be derived by the context of where it is, what has happened there, who uses it, how they use it. So this is a site specific, sited work that belongs only there, and if you took it and moved it somewhere else, it wouldn’t work.”

When asked about his aspirations for the future, Weitzman continued to dream big, saying, only a bit humorously, “When I read about Gutzon Borglum, who did Mount Rushmore, I thought to myself, you know, you give me enough people and enough money and I could carve a mountain too.” Before that project though, Weitzman expressed an interest in taking FOTERA to the next level by creating a full-color, high-rise building with it. He says of his dreams, “Imagine a fifty story building in full color, in any design. It glistens like a jewel. How wonderful would that be?” Weitzman’s aspirations are integral parts of what got him to where he is today, a true artist and creative mind, who never stopped envisioning new ideas.

Weitzman’s Frederick Douglas statue truly embodies everything he tries to portray through his work. It is an emblem of history and hope, and inspires hundreds of thousands in its new place in the Capitol Building. “It has beauty; it has significance; it’s meaningful…and hopefully. Maybe, it touches people. At the very least, that is what I would hope for in my work. That whatever it is that I sense about somebody, someplace, something…that somehow, through my expressing it, in any number of ways that I can do it, that it can be made real and whole, and in doing that, it somehow touches people.”